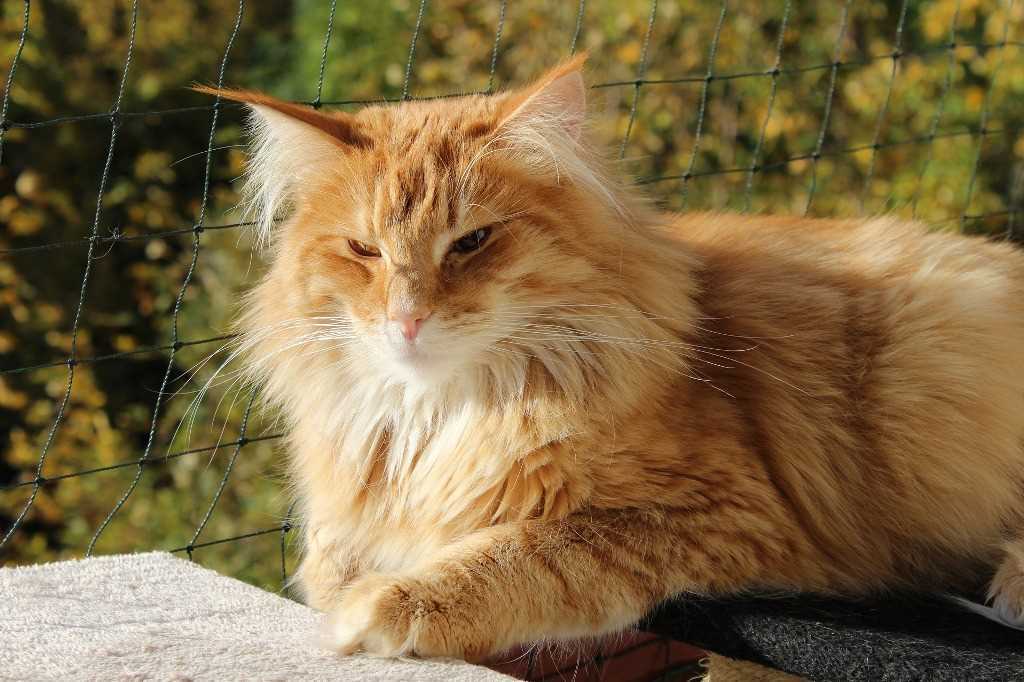 The origin of the majestic Norwegian Forest Cat is to be found even among the Vikings, by whom it was considered sacred. They kept it at home or even carried it on their ships because it was an excellent mouse hunter. There are many legends where we can find this particular breed of cat. It is said that the God Thor raised a large specimen to prove his strength and the Goddess of fertility Freia, went around the world in search of love on a chariot pulled by these muscular cats. It is an animal much appreciated for being majestic and elegant and for its very sociable nature. It is a great hunter and does not fear cold, snow and mud. The Norwegian exudes an impression of strength, tranquility and balance.

Despite its size it is a calm and peaceful animal and despite its appearance it looks proud and wild, it knows how to be very faithful to its master. It is also a very sociable breed with its own kind and even with dogs and other small animals. It is an intelligent, affectionate and playful cat. It can effortlessly open doors and sometimes even refrigerators, gets along well with children and does not like to be alone often, needs attention and daily play sessions. He never pulls out his nails or bites except for fun and very gently. It is not just for apartment life, he needs to climb, run and move around, so a safe garden from which he can’t get out is his natural habitat for his moments of leisure, but he also loves the comfortable and warm home life. Unlike other felines he loves water, a basin can entertain him alone and he is enchanted to see a trickle of water coming out of the tap. He has a melodious and sweet voice and knows how to modulate it very well to make him understand his requests, whether for play, food or cuddles. In northern Europe, where it is best known, it is also called cat-dog, because of its character resemblance to the dog. If accustomed from an early age you can bring it on a leash. He is a bit shy with strangers but very much inclined to make friends easily.

The Norwegian Forest Cat is one of the largest domestic cats, along with the Maine Coon. It can weigh as much as 8-9 kilograms and the female around 5.5 kilograms.  It is long, of robust constitution with hind legs higher than the front ones. The fingers are wide and palmate to facilitate movement in the snow. Long tufts of fur enrich the outer edge of the muzzle, until they descend under the cheeks forming on the chest a thick collar similar to a large beard called gorgiera. For this reason it seems to have a very thick mane. It can be bicolor, tricolor, uniform. In fact for this breed there are no cloaks not allowed in the colors. The ears are large and pointed and with thick tufts of hair inside. Its hair is water repellent, also for this reason it is a cat that particularly loves water. It loses very little hair and to cure it just brush it a couple of times a week. It is a natural breed therefore very robust and healthy, but the breed selection of breeders must be very scrupulous as they can develop hereditary diseases. Its diet is not very strict, it is not a cat that tends to eat too much and it is fine with both wet and croquettes, both fish and meat. The only thing not to give him is rice, as it can trigger allergic reactions even strong. This breed has very long life expectancy, ranging from 14 to 16 years and even longer.