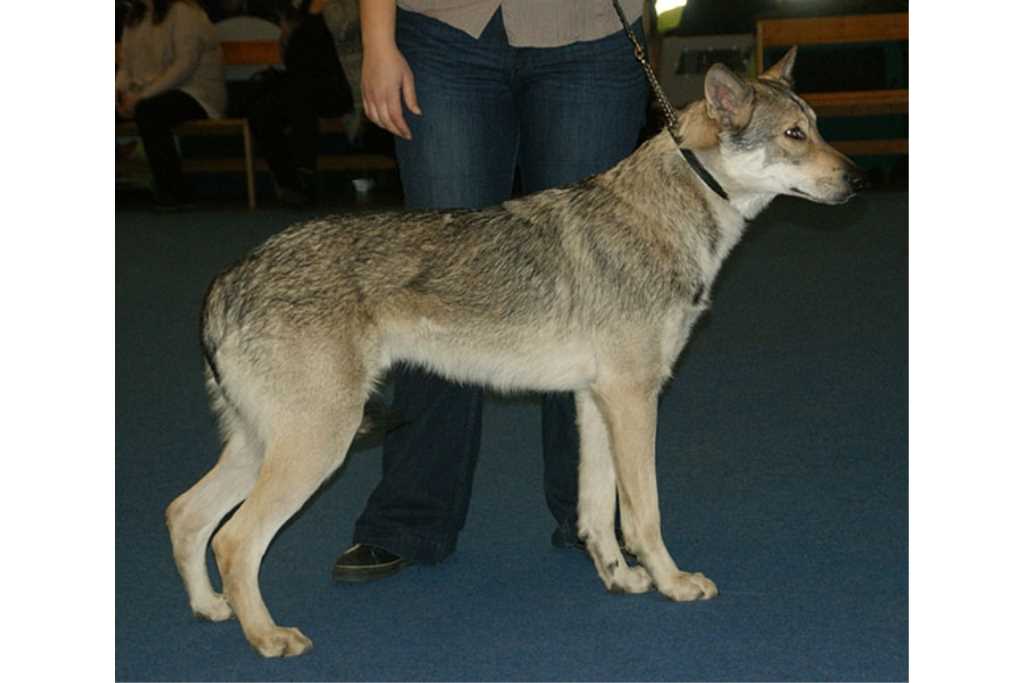 The Saarlos Wolf Dog dog breed is a breed that came into existence recently.  It is mentioned in 1932, when Leendert Saarlos crossed a utility German Shepherd with a She-wolf of Siberian/European origin. Initially he managed to obtain 28 puppies, but only 3 of these were considered suitable to become the official progenitors of the new breed.

The first subjects were used as guide dogs for blind people; later on during the selection was reintroduced wolf blood, making the following individuals unsuitable for any work, including that of guide dog. This dog has not proved to be a good defensive dog either, as like the wolf it is very suspicious, leads a secluded life and prefers to run away rather than attack. It is absolutely not aggressive neither towards men, nor towards other similar dogs, on the contrary it is considered a good rule to already have a dog in the house when taking a Wolfhound of Saarlos.

This dog in fact is a pack dog, it considers the family and the other dog or dogs as its pack and it trusts only them. In fact, taking a dog of this breed is forever, it is unthinkable to leave it even for a few days, it would consider it a betrayal and it would never trust the human being again.

It is a dog suitable for expert masters already of this breed as these dogs are quite difficult to train and have their own code that the master must accept. Faithful, docile and affectionate of course, but also a little bit stubborn and very autonomous, they submit themselves reluctantly and their obedience is hardly absolute.

Character of the Wolfhound of Saarlos

The Wolfhound of Saarlos retains many of the wolf’s behavioral traits, it is shy in front of strangers, very wary and tends to flee in threatening situations. He needs large spaces, the ideal for him would be to live in the country and take long walks in the woods with his owner. It must do a lot of exercise because it is hyperactive and can get bored easily, especially as a puppy if left alone in the house will most likely destroy everything that comes within reach.

In this breed the socialization is very gradual, is of utmost importance to have balanced adults. It is very affectionate and sensitive, but must feel every day an integral part of his pack. It does not tolerate solitude, but loves to spend its time in company and follow the head of the family in the various activities.

It is not suitable for lazy or sedentary people, for the elderly and it is absolutely not an apartment dog, even if it is a very good companion dog. Very sensitive, can not stand the noise and the crowd that can stress him quickly.  It coexists peacefully with other dogs, but it is necessary to begin socialization from an early age to avoid problems. It is absolutely not suitable to live with a cat as it has a strong predatory instinct and would see the feline as its prey.

Appearance of the Wolfhound of Saarlos

This dog has the morphology of a wolf, so it is very similar to a wolf, in fact it also has its gait, sinuous and light.  It has a rather pronounced musculature, built harmoniously with long limbs, but that do not give the impression that the dog is disproportionate.

The head has the characteristic shape of the wolf, but well proportioned to the body, the truffle is generally black but can also be flesh-colored, the eyes are almond-shaped, medium-sized, usually golden yellow, has a very attentive and intelligent look. The ears are of medium size, rather erect and wide at the base, they have hair also inside and end in a point. The tail is attached rather low, carried in saber at rest and not very mobile. It can be carried high when the dog is in action or in an intimidating attitude.

The coat is short and very dense.  The coat is composed of a woolly undercoat and cover hairs. Allowable colors range from light shade black to dark black and from very light cream to white.  The cover hairs around the neck form a kind of collar.

Health and care of the Saarlos Wolfhound

The Saarlos Wolfhound generally enjoys good health, its average lifespan is long for dogs of this size, ranging from 12 to 14 years in fact. It may suffer from poor digestion or dermatitis. He suffers much more from heat than cold, and needs a lot of movement and being in the open air.

The value of respect in my opinion