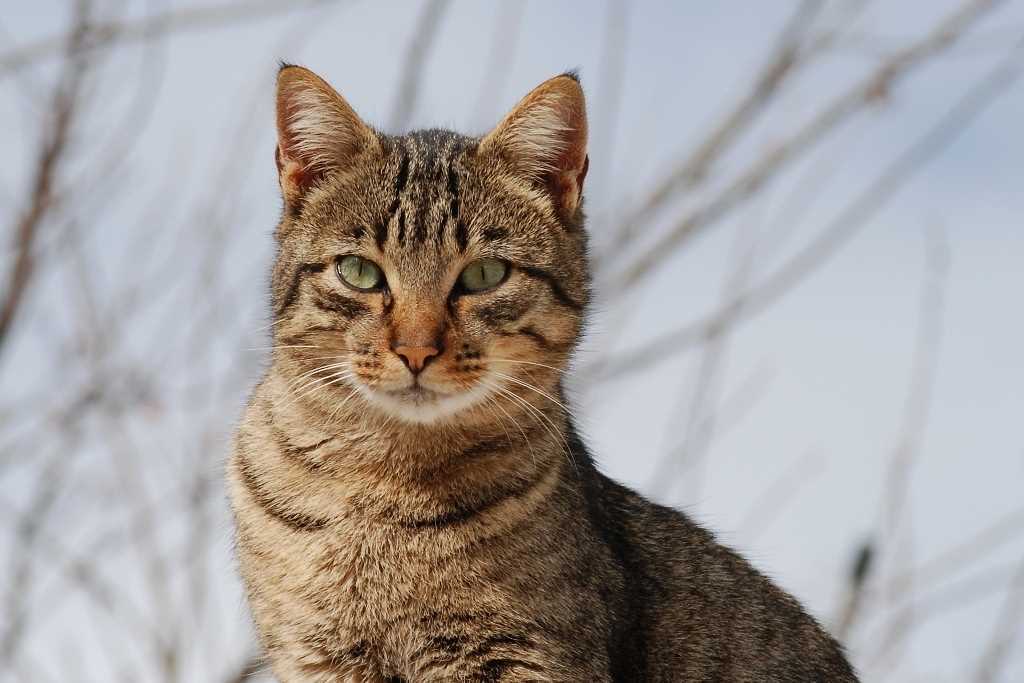 The American Bobtail cat is a rather young feline breed. It dates its birth around the 60s of the last century. Its appearance resembles that of a small lynx dressed in its winter fur. Its peculiarity is the tail, very short, positioned high and resembling a pompom. This breed appeared spontaneously from a genetic mutation, but it was then necessary to resort to genetic selection to better define and fix its characteristics.

In short, its history is this.  Mr. and Mrs. Sanders spent a vacation in Arizona, where one day during a walk they found a brown spotted tabby kitten that had a very strange tail: very short and positioned high, resembling a pompom. They named the kitten Yodie and took him home with them when they returned from vacation. He was expected to be neutered, but before this event he managed to approach the Siamese seal point kitten of the house. A litter of black kittens with tabby streaks was born, some with long tails and others with their father’s tail. One of the kittens that remained on the farm, then crossed with a cream point category Siamese but with white feet. The result was blue-eyed, short-tailed kittens, very similar to Siamese and with white feet.

A family friend who is a cat lover decided to make it a true breed by mating kittens with short tails. During mating, a long-haired cat was introduced into the offspring, which gave birth to the American Bobtail variety with semi-long hair.

This breed is very little spread in Europe.

Character of the American Bobtail cat

It looks like a small lynx or a wild cat, but its character is quite different. It is very sweet and affectionate with all members of the family, including animals. It is also a very intelligent cat, you can easily teach it games such as retrieving or looking for objects, you can even get it used to going out on a leash. It is very patient, therefore suitable for families with children and also suitable for the elderly because although it is a lively and agile cat, it is also quite lazy and loves comfort, long sleeps on the sofa and apartment life in general.

The ideal for him would be to have a safe garden where he can spend some time running and climbing. In the house it is good to provide something where he can climb and maybe get his nails. He is a skilled hunter, so expect that when he goes out he can bring home treats. It does not like loneliness, so it is not a cat suitable for those who are away from home for many hours, but it needs to have someone to play with during the day. With strangers is quite curious, a little shy maybe, but it approaches definitely, curiosity wins over shyness. It is famous for emitting trills and snaps of the tongue when it is happy.

Appearance of the American Bobtail cat

The American Bobtail cat is a medium to large size cat, males can reach up to 9 kilograms, females a couple of kilograms less.  It has a well-developed musculature and bones, with medium length paws, the hind ones slightly longer than the front ones, rather short if compared to the rest of the body, massive, with rather large feet, round and with tufts of hair between the toes.

The head is wide and rounded, proportionate to the body, the ears are of medium size, wide at the base and with slightly rounded tips. The eyes are large almond-shaped, the colors can be, copper, gold, yellow green and even blue. Its tail is very particular: short, covered with long, thick and shaggy hairs. It ranges from 2 centimeters to 10 at most.

The fur, medium to medium-long, is thick and dense, with a thick undercoat. Generally, the fur is longer and thicker around the head, lower belly, back and tail. It can exist in any color and coat pattern, such as brown, black, chocolate, blue, lilac, red, cream, with white or without.

Health and care of the American Bobtail cat

The American Bobtail can live up to 15 years or more. They are very resistant to disease and have no particular susceptibility to genetic diseases. However, it can be affected by hip dysplasia, spinal problems, especially those with a very short tail and dermatitis problems. As far as feeding is concerned, it is good to control the amount of food, as it tends to eat more than necessary, being a basically lazy cat, it often does not do the exercise it should do.

For the care of the coat, it does not lose much hair, except during the moulting period, it is good to brush it once a week. For the rest the general cares that are adopted for all breeds of cats are valid.