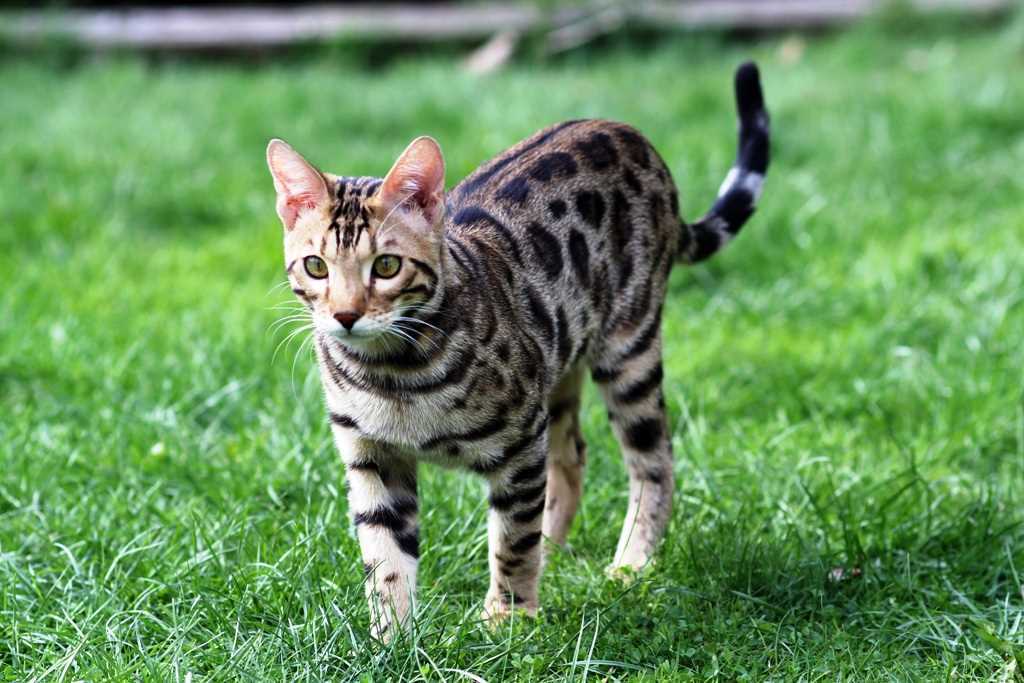 The Ocicat is a cat originally from the United States and more precisely from Michigan. It owes its name to the Ocelot, a feline native of the equatorial forests of Central and South America, to which it resembles for the stains of its coat. It is the result of natural selection and, contrary to its appearance, it has no wild blood.

The first specimen of this breed was born in 1964 from a cross between a pure Siamese and an Abyssinian. A spotted kitten was born in the litter and was named Tonga. A further cross was made with an American shorthair, strengthening the size and introducing the silver color on the coat.

In Europe it is a very rare cat, on the contrary in the United States is very common and appreciated.

Character of the Ocicat Cat

The Ocicat Cat is a sociable and mild cat that socializes easily with everyone, loves company and suffers loneliness if left alone for many hours.

It is a lively, curious and intelligent cat and it is very attached to the human you choose, but it is also affectionate with all the other members of the family, so much to follow them everywhere.

For his intelligence is a cat that is not difficult to get used to going out on a leash and can learn to bring back. It is no coincidence that it is also defined as a dog-cat for its predisposition to learn and obey.

The Ocicat Cat is always active, indeed hyperactive, so it is not good for people who prefer a cat that sits on the couch just moving around to eat and little else. Precisely because of this hyperactivity is very suitable to be with children as it is playful and tireless playmate.

It adapts very well to apartment life, but the ideal for this breed always predisposed to movement is a garden or terrace in safety where you can run, play and explore in freedom, just as he likes to do.

He has no problems living with other cats and if used as a child even with dogs. With strangers usually shows great interest and is quick to make friends and require caresses and attention. He is an indomitable hunter, so be careful to have small animals, fish or birds in the house.

The Ocicat cat is a large, muscular and athletic cat; its bones are powerful. The male can weigh as much as 7 kilograms, the female a couple of kilograms less, but despite the size appears elegant and graceful. The body is long and athletic, the legs are of medium length, the tail is quite long, medium thin and has a dark tip.

The head is heart-shaped and is marked by a characteristic M-shaped design. The ears are moderately large and rounded at the ends and with tufts of hair. The eyes, large, almond-shaped and tilting towards the ears, can be of any color except blue.

But it is the coat of the cat Ocicat that distinguishes it, in fact it is spotted like the feline from which it takes its name. This gives it an exotic and wild look. The hair is short, smooth and shiny and has no undercoat. The colors of the coat are many and can be: tawny, blue, chocolate, lavender, cinnamon, black silver, blue silver, chocolate silver, lavender silver, cinnamon silver and tawny silver. The cloak must be spotted with large, round dots forming rows along the spine and descend on the legs as far as possible.

The cloak needs little care, just brush it once a week and pass a chamois skin on the hair to make it soft and shiny. Only during the period of the wetsuit should be brushed more often.

It’s a very robust cat and hardly ever gets sick, it doesn’t suffer from particular pathologies if not those inherited from the breeds with which it has been crossed. It has a life expectancy from 12 to 15 years and even more.

It has no particular indications for food as it is able to regulate only its diet and like all cats prefers meat and fish. It is not a cat that tends to obesity because it is hyperactive even in adulthood.

It fears the cold very much, instead it tolerates the heat very well.