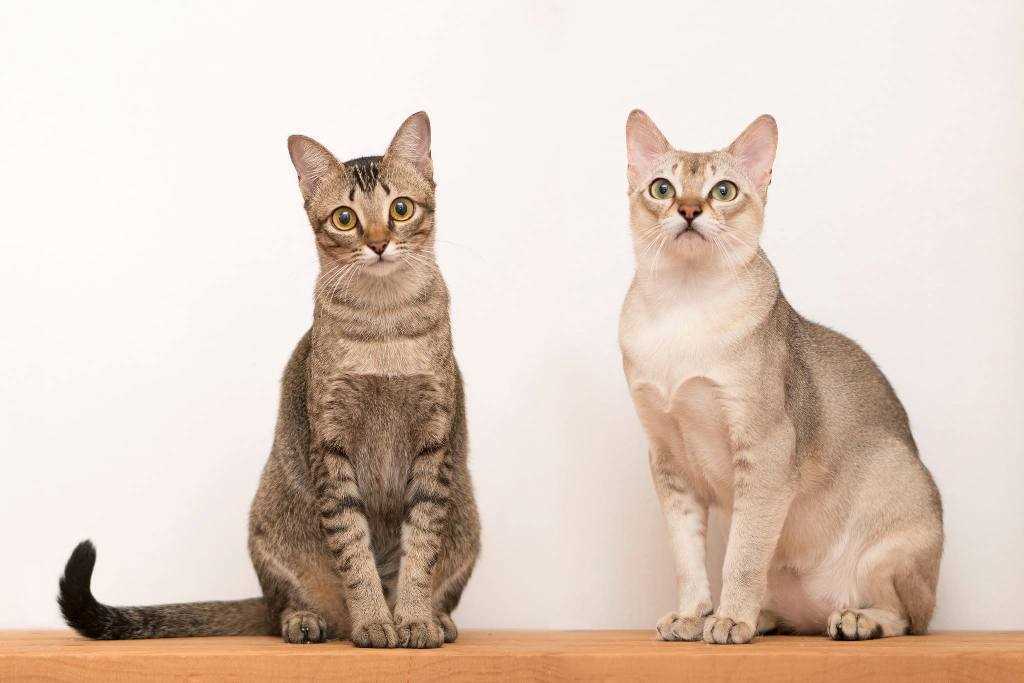 The Singapura Cat is the smallest cat breed in the world. Originally from Singapore, it was a street cat; the kittens lived in small sewage pipes and for this reason are also called “drain cats”, and survived by rummaging through rubbish bins for food.   Nowadays, this breed is bred only in the United States and by very few breeders, so it is quite difficult to find them and they have a rather high cost, also because today the export of cats from Singapore is precluded, because the government has elected these cats as a national emblem.

In the 70’s two cat breeders, during a visit to the city of Singapore noticed these kittens, which looked like small lynxes with big sweet eyes, decided to bring a couple of them to America and start a selection program. A few years later another breeder, Barbara Gilberton, imported more kittens. In Europe, the first subjects were imported from the United States by a French breeder, Mrs. Leotard.

Character of the Singapura Cat

The character of the Singapura cat is unique, peaceful and amusing at the same time. They are kittens that need a little time to become familiar with their environment and with people. They seem shy and very timid at first, but as soon as they have gained confidence, they are very affectionate and cuddly. They become particularly attached to one person in the family, but are very involved in the life of the family, its inhabitants and other cats and dogs. In fact, it can be said that these cats do well in the company of another cat, regardless of whether they are of the same breed, as they get on well with everyone and gradually gain their trust.

They appreciate the comforts of home, especially in the cold season, when nothing will convince them to go out, while in the summer they are happy to spend time in the sun, and if they have a safe terrace or garden they love to run and climb.

Despite their small size, they are very active cats, great hunters and very playful. They have no problems if they have to spend several hours alone, but they are just as happy when people come home and show this joy with little paws or nibbles to attract their attention.

Appearance of the Singapura cat

The first thing that strikes you about this cat is its size. It is very small, the female ranging from one to two kilograms, the male from two to three kilograms. Despite its delicate appearance, this cat has an athletic and strong physique, with well-developed musculature, which makes it capable of amazing jumps.  It has muscular paws despite having a fine bone structure.  The feet are small and oval, the tail is quite short, thin and round at the top.

The head of the Singapura cat is small and round, the eyes are large, very expressive and walnut-shaped. The colour of the eyes is generally green in all its shades.  The ears are rather large, very straight and well spaced on the skull. One of the singapura’s most distinctive features is the dark line around the nose and eyes.

The coat is fine and very short, well adherent to the body and slightly long on the spine. The basic colour of the coat is antique ivory, characteristic because it is flamed with brown tigratings. Some parts of the body, such as the legs, chest, muzzle and chin, are lighter. The coat has the characteristic that in every single hair there are alternating shades of light and dark colours.

Care and health of the Singapura cat

Being short-haired, the Singapura Cat does not require any particular care with regard to its coat. Brushing it once a week or once every two weeks is enough to remove the few dead hairs, as it has no undercoat and loses almost nothing.

The Singapura cat is an animal of good health in general. It is not prone to any particular diseases. It eats everything and is not particularly fussy. Its eyes, however, are rather large and tend to water, and must therefore be cleaned from time to time with a special product. This breed has a life expectancy of 15 to 20 years.