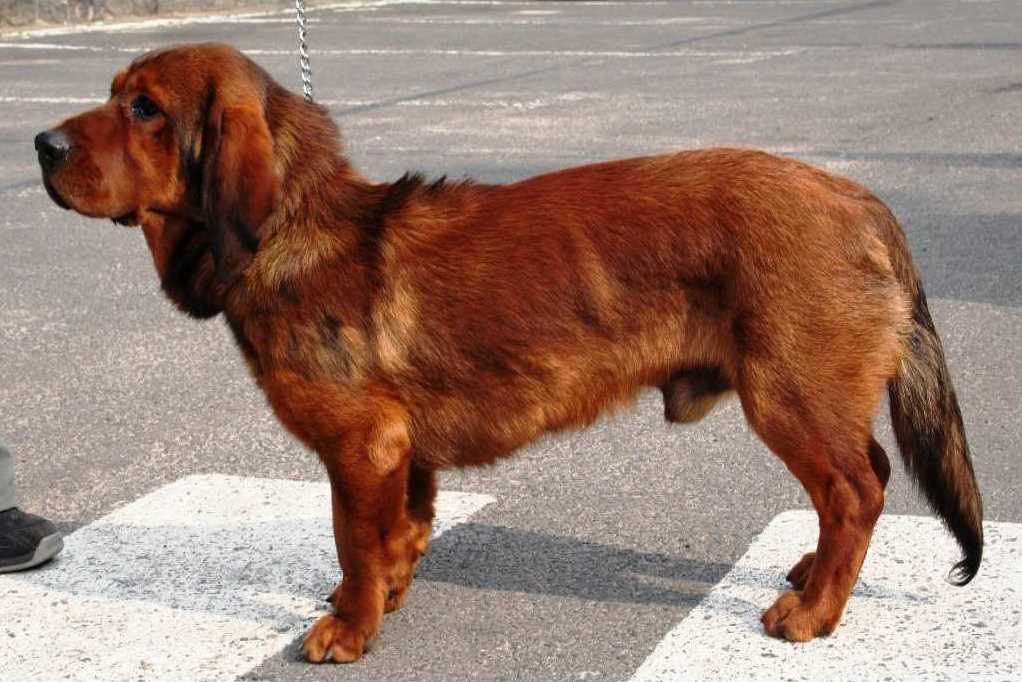 The origin of the Alpine Dachsbracke dog breed, also called the Erzebirge Alpine Dachshund, is Austrian. It is said to be a very old breed because we find depictions of dogs very similar to today’s dogs as far back as the Roman-Gallic era and are also found in some paintings from the 12th century. Even then they were hunting dogs with extraordinary qualities. It is in fact a miniature hunting dog but very strong and resistant, capable of chasing small but also large game.  Prince Rudolf of Habsburg, a great admirer of this breed, took them with him on hunting trips to Egypt and Turkey in the 1880s.

In 1975 it was finally recognised by the most important Austrian dog association as the third breed of hunting dog.

Its ancestors are said to have been hunting dogs crossed with dachshunds, when in the mid-nineteenth century, some hunters decided to select a hunting dog that was both strong and faithful. In fact, the Dachshund breed is an excellent hunting dog as well as a companion and family dog.

Although it is primarily an excellent hunting dog, and is usually adopted for this purpose, it is also an excellent family dog, due to its cheerful and affectionate character. It is very bonded to its owner and, being a dog that likes to play a lot, also bonds with the children in the family.

It is active and intelligent and adapts very well to the rhythms of daily life. However, it is still a hunting dog, and therefore very energetic, and is not suited to a sedentary life and needs to be constantly stimulated.

Due to its strong sense of protection for the pack, it is also considered an excellent guard dog. For its training, it is necessary to start from a very young age, with socialisation and responding to calls, as its instinct is to chase prey, so it is very useful to get it to retrace its steps when it slips into the bush in search of rabbits or birds.

It is, however, a dog that learns quickly, which is why its training is very easy and is also suitable for those who have no experience with dogs, although it is certainly a little stubborn. It is not a dog that should be left alone for a long time, as it suffers greatly if it feels excluded from its social group. As for other animals in the house, it is a little difficult for cats, as they see them as prey, but it is a little better with cats, provided that they are socialised early on.

The Alpine Dachsbracke is a medium-sized dog with a height at withers of 36 to 38 centimetres and a weight of 15 to 18 kilograms. The male is slightly larger than the female. This dog bears a slight resemblance to the dachshund, as it has short legs, although not as short as those of the dachshund, and an elongated body. It is a strong dog, with a robust constitution and strong musculature.

The tail of the Alpine dachsbracke is thick at the base. It has a high hairline but is usually carried low. It must reach all the way to the ground, and the coat must be longer at the bottom.

The skull is slightly convex, the muzzle is strong with a black truffle. The ears, high, are droopy. They are wide and flat with rounded tips and of medium length. The eyes are generally dark brown with an intelligent and friendly expression.

The coat is short, coarse and with a thick undercoat. The colours tend to be dark fawn with black spots, or black coat with red spots. The ideal colour is dark fawn. Black with red-brown spots on the head, chest, limbs and lower part of the tail can also be found. Sometimes they have a white star-shaped spot on their chest.

Care and health of the Alpine Dachsbracke breed

The health of this dog is truly ironclad. This breed is not prone to genetic and hereditary diseases. It has a life expectancy of about 12 years, but it is not uncommon to find dogs that have lived to be 15 years old. It does not tolerate intense heat very well, while its thick, double coat protects it very well from the cold and humidity. The only problem is its long, drooping ears, the fragility of which can expose it to ear infections. It is advisable to carry out a thorough check of the paws after each return to the home to ensure that there are no cuts or wounds that could become infected.

As far as coat care is concerned, hair loss in the Alpine dachsbracke is moderate, so a brush once a week is sufficient to keep its coat in perfect shape. However, daily exercise is a great help in counteracting its hyperactivity.

It has no particular tendency to put on weight, partly because its nature dictates constant movement. So the rule is simple: combine a healthy, balanced diet with daily exercise.