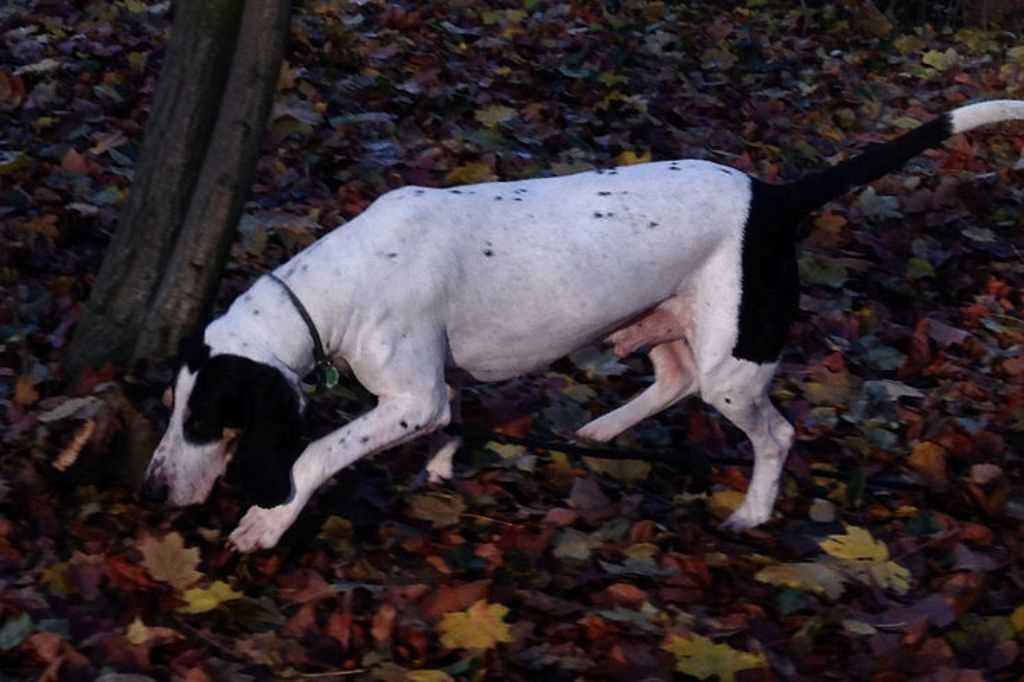 It is a hunting dog, created around 1912 in the department of Ariege, also called briquet du midi. It was created by Count Elie de Vezins who mated an autochthonous racing dog with another dog that was perhaps the grand bleu de Gascogne or the grand gascon saintongeois and from these crosses a hunter superior to all its ancestors was born.

Its little diffusion is due to the fact that many claim that it is not a pure breed; in its history it has never recorded booms of success but it has always remained well-liked in its homeland, where it stands out particularly for its ability with prey such as hares and especially wild boar.

Character of the Ariegeois dog breed

The Ariegeois can be described as a hardy breed, very well suited to hunting, but its character and temperament also make it a good companion dog.  When hunting, it is combative, resistant and even stubborn, while in the family it is quite different, very affectionate, playful and docile.

It has a special affection for its owner, it never abandons him, it covers him with attention, it always stays by his side and always tries to follow him. It can be said that for him, obeying his master has absolute priority. This breed has the reputation of being calm, outgoing and gets on well with children and adults.

As far as its training is concerned, it is a very easy dog to educate because it tends to please its owner in every way, but because of its hunter instinct, it does not socialise easily with other animals and barks a lot. Socialisation from puppyhood can solve both problems. With cats it is a little more difficult unless they grow up together.

Even if it does not hunt wild boar or hares, it can find other suitable occupations in the family, as long as it is allowed to do its exercise hours. This is also necessary if he is to stay healthy and not get fat. But it also likes to do nothing and relax with its human.

Appearance of the Ariegeois dog breed

The Ariegeois is a medium-sized dog. In its morphological classification, it is considered a braccoid, recognised and classified by the F.C.I. as a bloodhound and track dog.

This breed is characterised by a light structure, a fine body and a distinct appearance. It is similar to other breeds of French hounds, what differentiates it is the size. In fact, the Ariegeois is smaller than the Grand Bleu de Gascogne and the Gascon-Saintongeois but much more defined. Its height at the withers ranges from 55 to 60 centimetres for an average weight of 28-30 kilograms, the females usually weighing a little less. It is, however, a very beautiful dog with the right proportions. Its gait is loose, light and fast and it also has a highly developed sense of smell.

Its front legs are straight, while its hind legs are much stronger and end in powerful legs resembling those of a fox, while its tail is slightly curved.

The head appears elongated and light, it has no wrinkles or dewlap, but like other hounds the Ariegeois also has extra skin hanging from the muzzle, but it is less extensive than in other breeds. The muzzle is narrow with a black coloured truffle with well opened nostrils. The ears are long, drooping and fairly wide, they are also curled and soft to the touch. The dark, well opened eyes have a very sweet and alert expression and are usually brown.

The coat is short, fine and dense.  The colour is usually white with spots of pure black, with well defined outlines. Some rather pale blotches are also found on the cheeks and above the eyes. It can also be speckled or blue, pale fire and even bright red on the muzzle. It often has black streaks which are almost always on the head and ears, but also around the eyes and sometimes all over the body.

Health and care of the Ariegeois dog breed

This breed is generally healthy and does not show any particular predisposition to genetic diseases, given its recent creation.  Its long, drooping ears do, however, make it prone to ear infections, which are easy to prevent with regular cleaning, especially after a hunting session. It has a life expectancy of 10-12 years. It is a dog resistant to fatigue and cold, prefers to be outside but at night it is good to keep it indoors.

As far as the care of its coat is concerned, being short and smooth, it is easy to brush, once a week is enough and a couple of times during the moulting period, but it does not lose much hair even in that period.

As far as feeding is concerned, it is not a difficult dog, it accepts both industrial and traditional food as long as the rations are balanced and of good quality.

One meal a day is sufficient, preferably in the evening, so that it does not work on a full stomach. If it gets all the exercise it needs, it will not have any overweight problems.