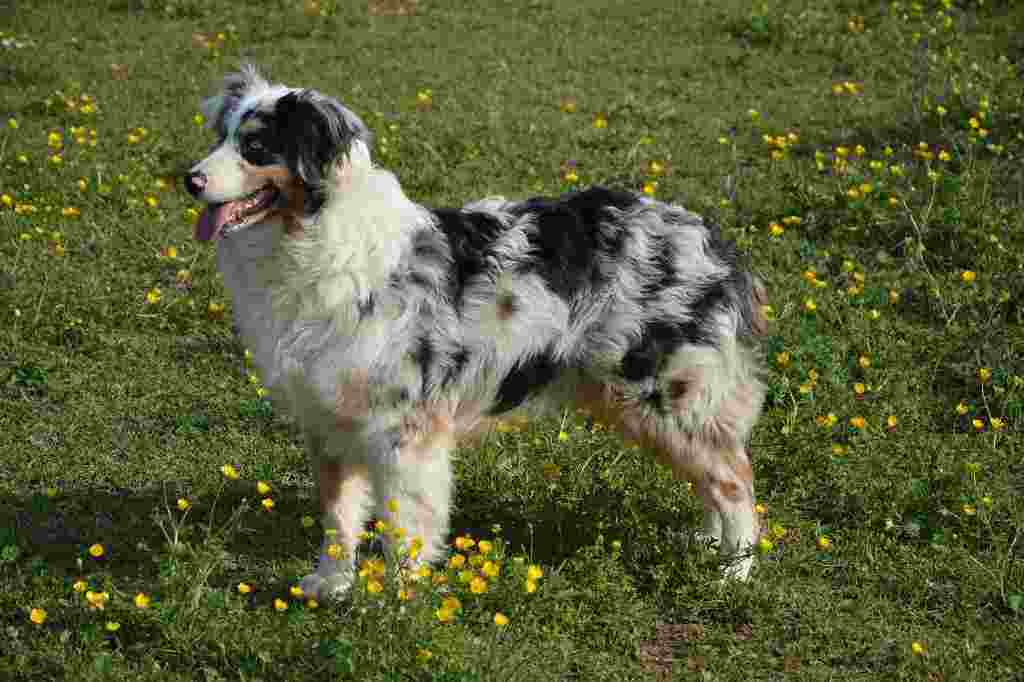 It is a very versatile working dog, intelligent and with a strong shepherd instinct combined with an attractive appearance. It is not a dog that can be left to do nothing; the sheperd needs to be engaged in structured and versatile activities that can stimulate it both physically and mentally. This dog in the United States is still often used to lead herds on ranches.

Initially, the Australian Sheperd was selected as a working dog, and it is perfect for this. It has a strong shepherd and guardian instinct, but it is also an excellent companion dog, with a good character, always active and eager to learn; it is very attached to man and has a strong desire to please so it is quite easy to educate.

As we have already said, it is an intelligent dog, it immediately understands its master’s weaknesses and knows how to exploit them, that’s why its education includes prudence, patience and empathy, but also firmness and consistency. The fact that it wants to please its human does not mean that it will blindly follow all orders; born as a shepherd dog, therefore very autonomous in its choices, it has maintained the characteristic of possessing its own will and therefore a certain independence.

In the family it is particularly fond of children and follows them everywhere. With strangers it proves to be a little reserved at first. With other animals it gets along well. It has a shy nature and could be a bit shy at first, but it soon becomes balanced, it doesn’t impose itself, but neither does it suffer. With the owner, however, it is very dependent, it needs company every minute of its life.

Due to its intelligence, this breed is also used as an anti-drug dog, guide for the blind, rescue and sports dog.

A curious thing about the sheperd: it is also called a smiling dog, because of its particular attitude to raise its lips showing its teeth. It’s not a growl: of course not even a smile, it’s a tic, but it does seem to smile.

The australian sheperd is a medium sized dog quite light, the measure at the withers goes from 50 to 58 centimeters for a weight that does not exceed 22 kilograms, the female usually a little less. It is a well-proportioned dog, slightly longer than tall, of average size and bones. It has an effortless, agile gait and shows great ability as a sportsman. The tail is straight, fairly long and covered with thick, long fur. In the past, puppies born with a long tail were cut off; today this practice is strictly forbidden by law in many countries. Some specimens are born without a tail or with a very short tail.

The head is slightly rounded or domed; it has a depth equal to its length, well proportioned to the body of the animal. The ears are triangular, not pointed and high on the head, which are tilted slightly forward or sideways when showing particular concentration. The eyes can be of any color even with speckling and marbling and are a distinctive feature of this breed, in fact they have variations of colors ranging from brown to amber, from hazel to blue. And many have different colors for each eye.

Another peculiarity of the sheperd is the coat because of the great variety of colors that can be found. The coat is moderately long and coarse, with a dense undercoat, while the coat is smooth and slightly wavy and protects it very well from the elements. In males, the mane and neck area are more hairy than in females. In both the hair on the ears, on the head, on the front part of the forelimbs is shorter and smoother.

The coat can be bicolored, tricolored or double coat, with spots of different shape and size from the white or fawn color. These markings are quite common on the muzzle, chest and paws. The colors that can be found range from black to blue-merle, passing through red with cinnamon and dark brown tones. They can also be found with spots with a mixture of red and blue or with silver tones. There is also a harlequin sheperd with striking colors.

Care and Health of the Australian Shepherd Dog Breed

The sheperd is a rustic dog that does not require particular care; it is subject to some hereditary diseases, the most frequent are hip dysplasia, elbow dysplasia and oculopathy and after 3 years of age epilepsy can occur.  As with the collie breed, many Australian Shepherds experience the MDR1 gene mutation, which leads to hypersensitivity to several drugs, including ivermectin (a common pesticide). When two types of merle are mated, the offspring frequently exhibit deafness and/or blindness. In many countries including Italy (as of October 3, 2018 – ENCI), merle x merle mating is therefore prohibited by law, with the intent to safeguard the breed.

The necessary cares for the coat are really few; it is enough to brush it every two – three days to avoid the felting of the hair and as far as the cleaning is concerned, it is enough to have a bath every month or more depending on how long the dog stays outdoors.  It is necessary to be very attentive to the cleaning of the ears, as this breed is often subject to infections and ear infections. In general, however, the shepherd is a long-lived dog, it can reach and exceed 15 years.

As far as feeding is concerned, if the shepherd does enough exercise during the day, it does not need particular attention, it is a dog that can manage very well on its own.