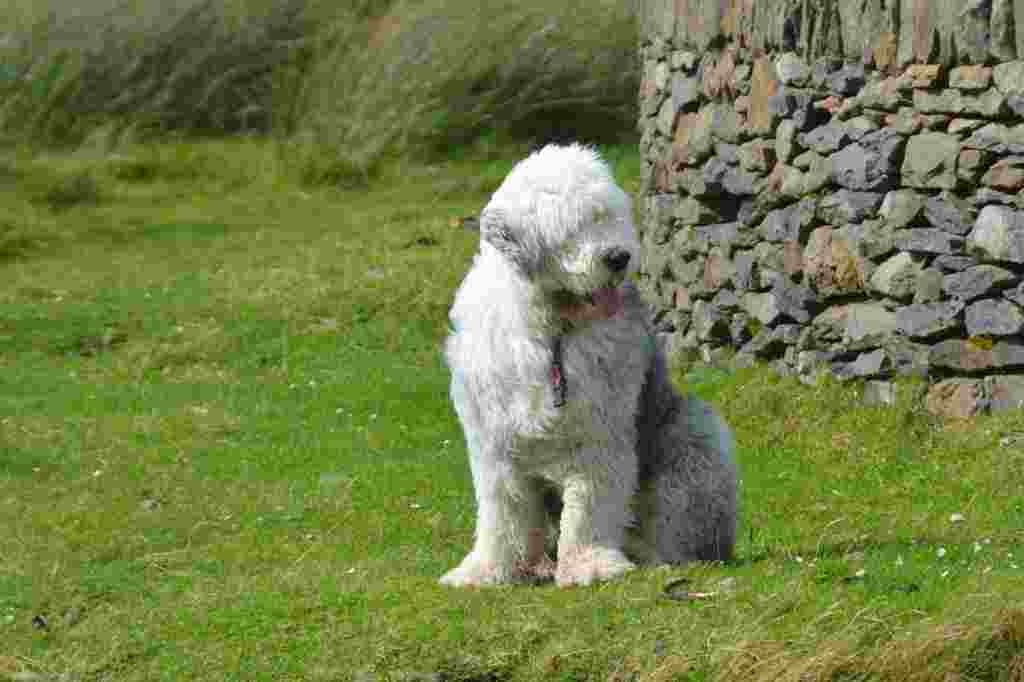 The origins of the bobtail dog breed are very uncertain, it is thought that their actual ancestors came from Owtcharka and Bergamasque type European shepherds, crossed with local dogs.  It is also called the Old English sheepdog and has been registered as British. It is believed that their area of origin coincides with the County of Devon and also with the Highlands of Scotland; responsible for the rustic character and abundant coat.

The thick coat is quite normal for dogs that live or have lived in areas characterized by harsh climatic conditions. Another theory, since it has been found, in its morphological aspects, some similarities with the “Shepherds of Russia” and with the Asian herding dogs, wants them to be related to other shepherd dogs that come from a single strain of Western Asia.

However, this dog was born as a working dog, accustomed to a rustic life. They helped to lead the herds to the market; bobtails are excellent in this job, it is even said their coat was sheared every year together with the sheep and farmers’ wives transformed the shearing of the dogs and the wool of the sheep into warm clothes.

A curiosity linked to this breed is that many of them have been protagonists of cartoons: it is a bobtail the colonel of the Charge of 101, Moses of Albert Wolf and Max, the dog of Prince Eric of Disney’s Little Mermaid. And not only that, Al Pacino’s dog in Serpico was of this breed and even Paul Mccartney had one, to which he also dedicated a song, “Martha my dear”.

Unfortunately this breed is drastically decreasing, if the trend continues like this, within the year the Old English sheepdog will be officially included among the vulnerable indigenous breeds. And this means that within a few years there could be so few specimens that the continuation of the species is no longer guaranteed.

Character of the bobtail dog breed

The bobtail is a docile, obedient and very well-balanced dog. It has an adorable nature, faithful companion of the family, very territorial which comes from the traditional role of a shepherd dog. It is an excellent watchdog, it shows a protective attitude towards its human pack, but hardly shows an unmotivated aggressiveness. It is a loyal and reliable dog, very cheerful and affectionate, that loves to be in company and play with children towards whom it is particularly protective.

He does not like to be alone, in fact he loves to interact with his family, but above all he is a dog who needs the attention necessary to be able to manage his daily life.  Very obedient, it is easily trainable and suitable also for those who are at their first experience with a dog. He has minimal character defects and loves to be in close contact with his owner. It has no dominant tendencies and its socialization is easy to manage.

It can also live in an apartment, despite its size, but it needs a lot of physical movement, so it must be taken out several times and for a long time so that it can let off steam. The ideal would still be a garden where you can spend a few hours a day and possibly in the countryside. With strangers it is cautious, but always posed if well socialized.

He gets along well with other animals in the house, whether dogs or cats, as they are part of his pack.

Appearance of the bobtail dog breed

The bobtail is a large dog, the male measures 60 centimeters at the withers and weighs 40 kilograms, the female a little less. It has a compact, balanced and muscular body structure even if it is not noticeable as it is extremely covered by hair. It is a stocky, robust and muscular dog. Its expression expresses intelligence. It has a gait characterized by a peculiar rocking when walking. This peculiar way of walking suggests the typical movement of bears.

The limbs are very muscular, but being completely covered with fur, do not impress with their power. The feet are small, round, with well-curved toes and no spurs. The tail is also very hairy, the dog is generally born with a long tail, but the practice of caudectomy, or the removal of the tail, was widespread.

The well rounded skull is covered with hair, strong muzzle, square and truncated, of a length more or less equal to the total length of the head. Well marked stop. At the bottom of the long, strong and square muzzle, there is the truffle, always black in color, always wide and voluminous. The ears are small and carried on both sides of the head.  From the thick fur sprout with difficulty the eyes which are generally dark.  Their eyes seem to be totally covered but their vision is never compromised.

The hair of the coat is abundant, of rough texture, shaggy and without ringlets. Undercoat woolly and waterproof and felted. Coat color can be any shade of gray, grizzle or blue with or without white socks.

Health and Care of the Bobtail Dog Breed

The bobtail is a substantially hardy breed. It has a life expectancy that averages 12 to 13+ years. Like many breeds of dogs, it is prone to hip dysplasia and some may be susceptible to a genetic disorder, ciliary dyskinesis, which leads to severe breathing disorders. There is no cure for this, but only by examining the DNA of the parents, it is possible to avoid giving birth to dogs subject to this disease.

As far as the care of the coat is concerned, it is enough to bathe it when it is really needed and to brush it once a week to avoid that the hair gets knotted. However, it needs particular attention to the hygiene of the ears, because the hair grows there abundantly. Since this is a dog with a long and thick coat, it is good to keep away any parasites collected in the open air, especially during the hot season.

It is a dog that prefers a long walk to running, and needs to move daily at least two or three times.  If it has regular exercise it is not a dog that tends towards obesity, even if its diet must be balanced and controlled to avoid it eating too much.