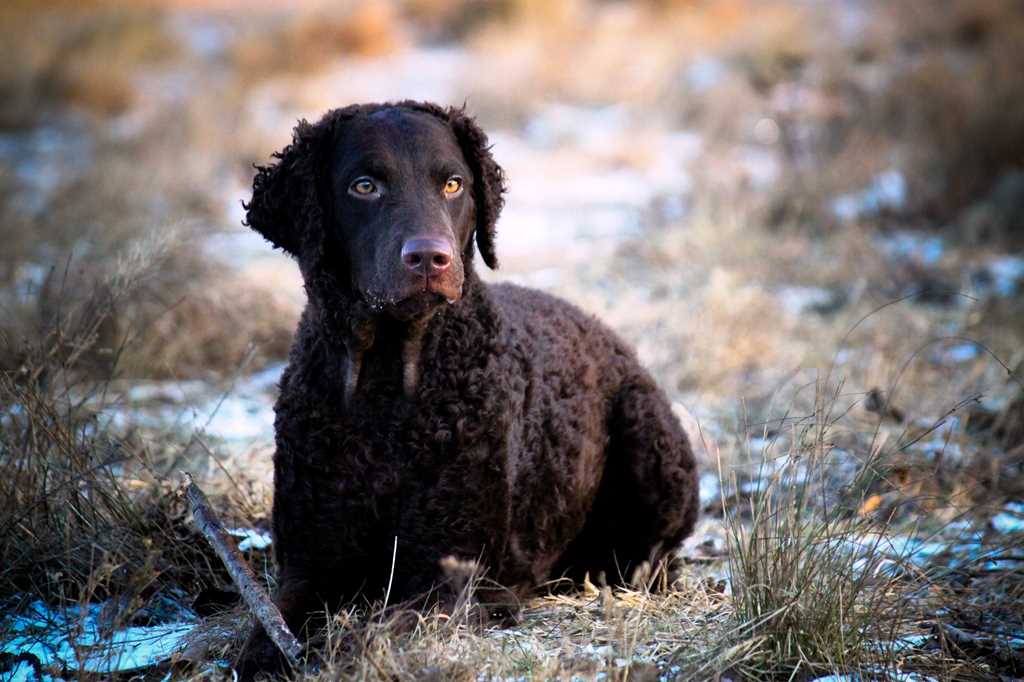 The origin of the curly coated retriever dog breed is English, and it is undoubtedly the oldest of the retrievers.  Finding its ancestors is not at all easy; various conjectures have been made. What is certain is that among its ancestors is the Newfoundland dog that was crossed with the Irish water spaniel from which the breed got its characteristic curly coat, which makes it unique among retrievers. Some speculate that there may have been the bum dog and even the labrador, but nothing is certain.

The only thing that is certain is that this breed has always been present in England. Its ancestors did not; in fact the retrievers came from Terra Nova in Saint John, where they helped the fishermen on the island of Terra Nova.

The curly coated is an excellent hunting dog, it is used for duck hunting in marshy terrain as it is an excellent swimmer. In fact it is thought to have inherited the hunting skills as a retrieving dog from the tramp. In the nineteenth century it was widely used, whereas today it is preferred to its smooth-coated counterpart, the flat-coated retriever. This is why it has become a very rare specimen, there are only a few examples in France, England, Scandinavia and the United States.

The curly-coated retriever is a strong, active dog with a friendly and confident character. It has a sociable and joyful temperament and loves to play especially with children. It recognises only one owner and becomes very attached to him, but is also friendly with the other members of the family, although it is from the owner that it requires all the attention. It is by no means aggressive, but is reserved towards strangers, which is why it is also an excellent guard dog.

It does not like to be alone, so is not suitable for people who are away from home for several hours a day. It needs an owner who enjoys exercise, as it needs to go on its long daily walks. It is not very suitable for living in a flat, the ideal would be a house with a garden where it can spend several hours a day, and perhaps even near a river or a pond as it loves to swim.

In fact, first and foremost, it is a hunting dog, much used for duck hunting in ponds, but it also loves to be in the company of its family. It is not very sociable with other dogs, which is why it needs to be socialised very early on, even as a puppy. With cats, if they grow up together, it usually gets along well.

It is a dog that loves to be the centre of attention and reacts well to training, thanks also to its great intelligence. It is sometimes a little self-centred, because it always wants to be considered.

It is a strong, active dog with a strong guarding and protective instinct, without being aggressive or biting. It is therefore suitable as a protective family dog.

With regard to its training, it is important to be firm and resolute and to give it a consistent and straightforward education.

The curly coated retriever is a medium-sized dog, the male measures on average about 67 centimetres at the withers and weighs between 32 and 36 kilograms, the female usually a little less. It has a strong and robust build, its proportions are well balanced, and it is generally very elegant.  The musculature is well developed and evident, the tail is moderately short, carried straight, tapering towards the end and is never carried high or curled. Its limbs are straight and firm and muscular; its gait is a long stride with good rear propulsion.

The head has a long, well-proportioned, flat skull with strong, long jaws.  The truffle is black or liver brown. The eyes are large, generally dark; black or dark brown in black-coloured dogs, while liver-coloured has a shade of brown that matches the coat. The ears are rather small, attached low, drooping and covered with small curly hairs as well as the tail.

It is the coat that is the main characteristic of this breed, in fact the whole body is a mass of thick frizzy curls very close to the skin, extending from the occiput to the tip of the tail. It has no undercoat or bare areas. The colours allowed by the breed standard are black and liverbrown, both plain and without shading.

Care and health of the curly coated retriever dog breed

Its health does not require any special attention other than constant exercise and swimming. However, like many other dog breeds, it may suffer from hip and elbow dysplasia and joint problems due to slow growth.

As far as the care of the coat is concerned, this requires some attention because, in general, the coat needs a lot of care. First of all, it is necessary to prevent its curly hair from becoming frizzy, in which case it is sufficient to moisten the coat slightly, and it is also necessary to brush it at least three times a week to eliminate dead hair.

As far as food is concerned, this is a dog that is predisposed to being overweight because it is very greedy, so it is necessary to pay attention to the amount of food it eats every day and it is generally best to feed it twice a day to avoid stomach problems.  It is very important to provide them with a healthy, well-balanced diet.