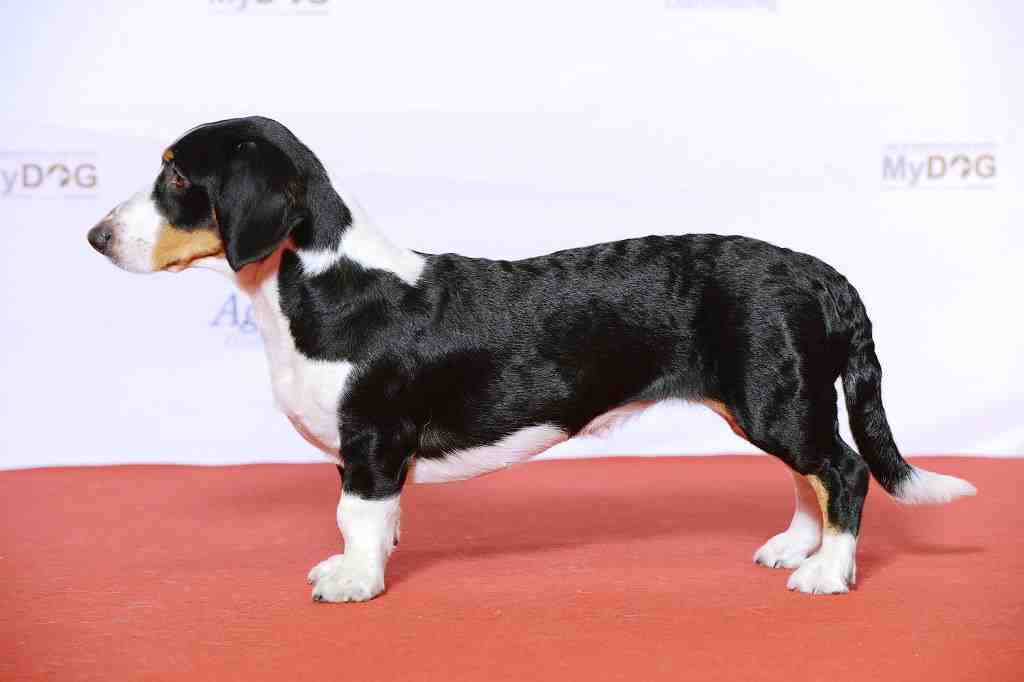 The drever dog breed is of Swedish origin and is especially widespread in Scandinavia and the northern European countries. It is almost unknown in the rest of the world. The origins of the drever, called schwedische dachsbrake in the original Swedish language, are not very clear. Very little is known about this dog before 1900. There are several hypotheses; one of them is that the ancestors of this hound have been present in Sweden for many centuries. Another theory is that the breed is much more recent, around 1900, when low-clawed hounds from Central Europe, in particular the German and Westphalian dechsbrake, were crossed.

Some experts speculate that these dogs, introduced in Sweden at the end of the 19th century, were crossed with other native dogs of the same morphological characteristics, giving rise to the modern Drever. In practice, however, it is the Swedish version of the dachshund.

It is a breed that withstands the cold very well, moving fast and very relaxed in the snow. In its country of origin it is used as a hunting dog, for wild boar and roe deer.

Due to its size and temperament, it is now also considered an excellent family dog, although it needs a lot of exercise to release its natural energy as a hunting dog.

Character of the Drever dog breed

The drever is a very intelligent breed and very affectionate with its owner and its family unit.  It is loyal and devoted, docile to commands and suitable for the company of children. However, hunting is its greatest need, so it would be a good idea for this dog to be adopted by a hunter, so that it can get the most out of its instincts. He is not suited to flat living and enjoys spending time outdoors. The cold is not a problem for him, as he has been used to the cold Scandinavian winters for generations.

If the owner is not a hunter, he must at least be sporty and not sedentary, as this dog needs his daily dose of exercise and stimulation. The ideal place for him is a garden where he can be outdoors most of the day, but make sure it is well enclosed, as his predatory instinct is very strong and he may run off after some prey.

It is a very good hound, it is quick and has an extraordinary sense of smell, so it shows all its value in hunting roe deer, fox, wild boar, which it chases and manages to push towards the hunter’s rifle range. He is so aggressive towards these animals, which are often bigger than he is, that he is able to intimidate them with his speed and gritty bark.

His favourite game is the search for prey, even small prey, to catch just for fun. This is why it is not suitable for cohabitation with animals other than dogs. It tends to see others as prey. With dogs, however, it is much easier to socialise them as they usually hunt in packs.

As far as training is concerned, it is necessary to use a bit of finesse, as it is a stubborn dog that tends to do its own thing. It is therefore necessary to have a minimum of authority to make it obey us. It tends to be very sociable even with strangers, so it is not a good guard dog.

Appearance of the drever dog breed

The Drever is a small to medium-sized dog. The height at withers for a male is at most 40 centimetres and its weight is 14 to 16 kilograms, the female usually a little less.

Although it is short and long, it has a well-proportioned physique, but it is not clumsy at all, on the contrary, it walks with its head held high, proud, despite its minute appearance. The body is robust and massive, with well-developed muscles and gives the impression of being very agile. Its legs are very short, which allows it to hunt in rough terrain and to squeeze and dig in very small spaces.

The limbs, however, are very strong, straight and parallel, the hind limbs having wide and muscular thighs. The tail is large and long and carried pendulous when at rest and sabre-like when the dog is active.

The head is large and rather broad in proportion to the body. It is fairly elongated and tapers towards the truffle. The skull is slightly convex. The truffle is large and usually black. The eyes are very expressive, with a clear and lively look, usually dark in colour and round in shape. The ears are pendulous, wide, with rounded tips and a low hairline.

The coat is rough, straight and well adherent to the body.  It does not have the usual height all over the body, usually shorter on the head, ears and lower parts of the limbs. On the neck, back and behind the thighs it is a little longer. As for the coat colours, they can be found in all colours, they usually have white markings clearly visible on all sides, and a full collar around the neck, and white areas on the limbs, feet and tip of the tail.

Health and care of the drever dog breed

The drever is a dog with excellent health and does not have any major problems, which are typical for the breed. It can suffer from ear infections and hunting injuries, as it is very aggressive with prey. It has an average life span of about 13 years.  It is very resistant to cold and snow, therefore it can also live outdoors, but it does not tolerate much heat, and therefore in the summer period its activities should not expose it too much to heat, as it is susceptible to heat stroke.

It has no tendency to put on weight, so a balanced diet and, above all, plenty of exercise is sufficient. As far as coat care is concerned, it is sufficient to brush it a couple of times a week and check it when it returns from hunting.