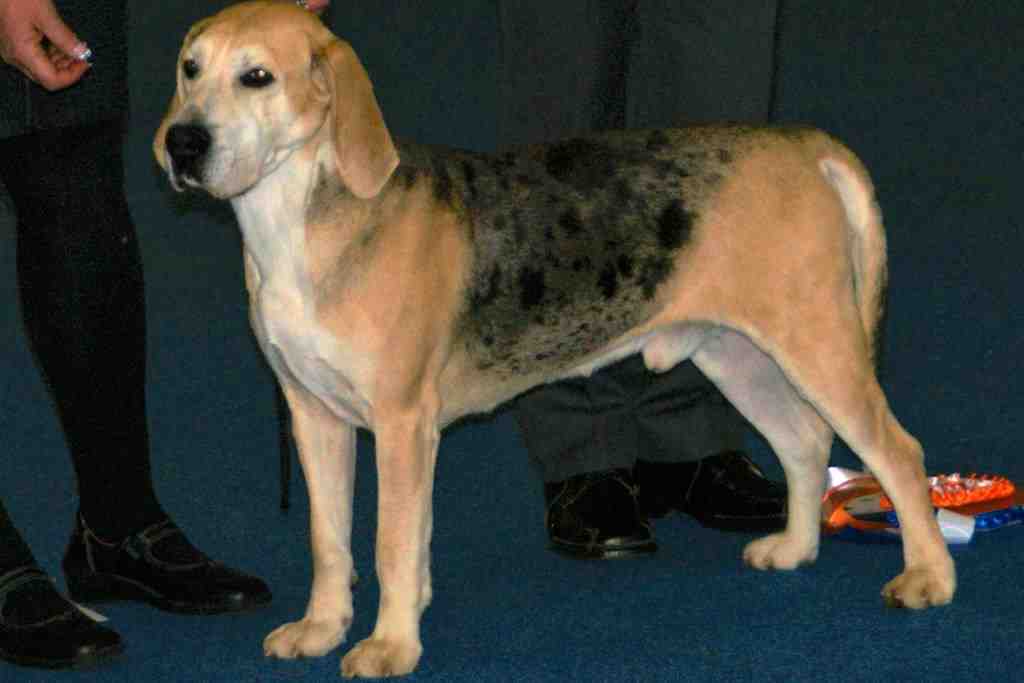 The Dunker dog breed originates from Norway and bears the name of the man who first selected it: Wilhelm Dunker. We are talking about the early 19th century, when Mr Dunker, a passionate hunter and dog lover, crossed one of his males with several females from the region where he lived; he wanted to definitively fix the hunting qualities of his dog. The result was what he had worked for, so he obtained specimens that were morphologically very stable, with the hunting predisposition he had hoped for and with a good temperament.

This breed is well known within its national borders, but outside its native territory it is almost unknown. Speaking of breeds, however, Dunker crossed Russian harlequin hounds with old Norwegian hounds. The breed was recognised under its current name and the first breed standard was drawn up. A cross with the hygenhound was then attempted and an attempt was made to register the fruit of this cross with the name Norwegian beagle at the Kennel club in Oslo, but the breed was not accepted and this is why the hygenhund and the dunker have continued to evolve as separate dog breeds.

The dunker is nevertheless an excellent hunting dog, working with skill and wisdom at hare hunting. Its sense of smell is impeccable and its tenacity is very strong. He thus hunts rabbits by following their trail rather than hunting on sight. Moreover, because of its character it is an excellent companion dog, provided, however, that it lets off its high energy, every day, with long walks and runs. After all, his first job is hunting and hunting remains his speciality. Enclosing him in a flat is not proposable, perhaps a large garden in the country may suit him, but always accompanied by more or less long outings. He loves, however, to stay indoors with his owners to whom he is very loyal, but prefers to be outdoors even at night, as long as he has shelter from the rain and cold.

Character of the dunker dog breed

As already mentioned, the dunker is also an excellent companion dog, as it is sweet and affectionate with the family even if it cannot live in the home environment for long, preferring to live outdoors. It is primarily a working dog that does not usually hunt in packs. The hunter would be the ideal owner for this dog, but if one has the possibility of having a garden and takes it out for long walks and runs it can stay with the family without necessarily hunting.

Its character is pleasant, vital and cheerful, always willing to work and toil. With children he is gentle even in play, and is also attentive to the elderly. It is a good guard dog as it trusts everyone and is neither shy nor aggressive with strangers. It is a dog that can be trained even by inexperienced people, as long as you set constant and consistent rules and above all do not want to achieve results with violence. If it grows up with a cat it can easily cohabit, beware however of foreign cats as it sees them as prey.

Early socialisation is necessary for contact with other dogs, so that it learns the canine codes and behaves well with its own kind.

Appearance of the dunker dog breed

The dunker is a medium-sized dog, morphologically classified as a braccoid type. The height at withers for a male is 50 to 58 centimetres, weighing between 20 and 25 kilograms; the female usually a little less. It is a hound with a strong but well-proportioned build.  It has a balanced and elegant appearance. It is an extremely robust breed, able to withstand the lowest temperatures and adapts to any terrain. Its feet are in fact round and not too big, with strong pads like a dog used to being outdoors.

The bone structure is strong, even in the limbs, with a rather developed musculature. Its structure is more suited to cross-country running than to speed. The tail follows the extension of the dorsal line, is thick and tapers towards the end. It usually forms a slight curve upwards.

The head is proportionate in size, the skull is slightly flattened between the ears and is not particularly wide. The muzzle is longer than short, rather square, the truffle is black and the nostrils are wide.  The round eyes are rather large, usually dark, and are clear, alert, lively and expressive, giving it a calm and serious air. The ears are very soft to the touch, are rounded at the tip and fall flat along the head; they are attached at medium height.

The coat is hard, dense and not too short.  Usually the areas behind the thighs and tail have a somewhat thicker coat. The colours are black or blue merle, with pale fawn and white spots.

Health and care of the dunker dog breed

The dunker is a particularly robust dog and has no problems. It may, however, suffer from hip dysplasia and deafness. It can tolerate both cold and wet weather, but in periods of high heat it is a good idea to shift its physical activities to the cooler hours of the day and offer it shelter in the shade and plenty of water. It has an average life expectancy of around 12 years, but can easily reach 14.

As far as coat care is concerned, this does not require much, just regular brushing to keep the coat in excellent condition. During the moulting period, hair loss is not excessive.

As far as feeding is concerned, this breed does not tend to put on weight, it eats any food, but high quality food is preferable to keep it in good health.