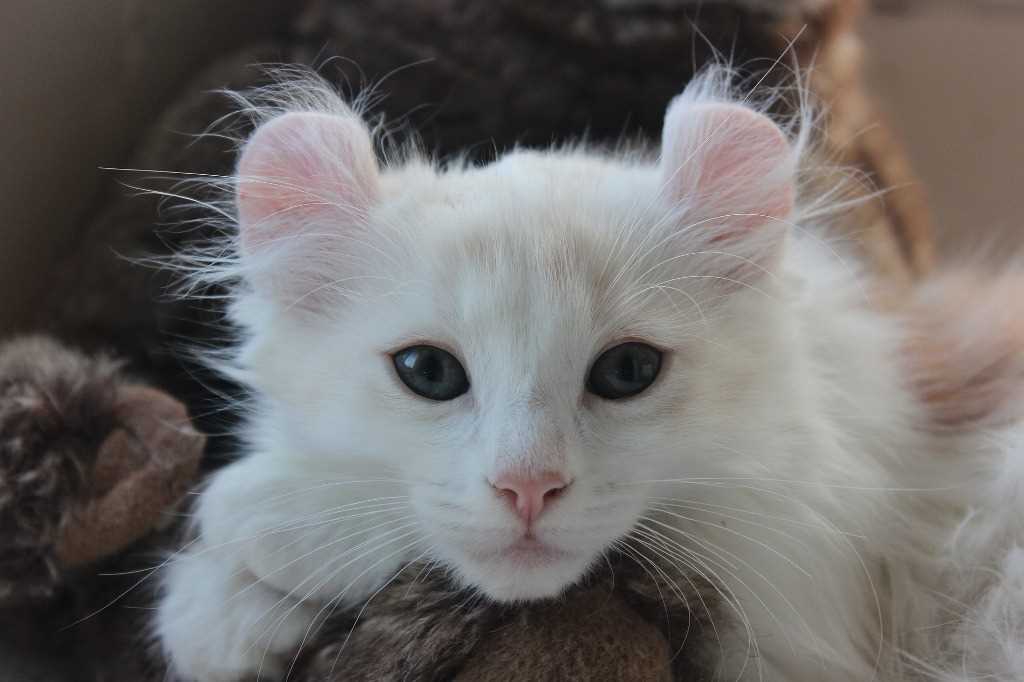 The American Curl Cat is a very unique feline. Its special feature are the ears, different from those of any other type of feline, ears curled back in a crescent shape that give it an almost funny look.

It is a very recent breed, which came out by accident. In 1981 in Lakewood, California, Mr. and Mrs. Ruga found a stray cat with these very strange ears. They named her Shulamith and she is considered the progenitor of all American Curl. When this kitten had her first litter it was noticed that two of the kittens had the same ears as their mother. The ear curl gene is dominant, so it is enough that only one of the parents has it, to pass it on to the litter. And that’s how this breed was created, which can be either long-haired or short-haired, of different colors, but which has the characteristic of curled ears.

Character of the American Curl Cat

The American Curl Cat is a very sociable and affectionate cat. It is lively and playful, therefore suitable for family life especially with children. It seeks the company of its owner, but also of all other family members. It can adapt to a solitary life, but it is very open to socialization, therefore large families, lively games and time to play are its ideals, even if it does not disdain moments of relaxation next to its human from whom it particularly loves to be cuddled. It is a very intelligent cat who loves to interact with those who are close and, often learns, with good training, the games of carryover.

It is the typical apartment cat, but it does not disdain being in the open air, so a safe garden is ideal where you can spend a few hours of the day climbing and running.

It can live with both dogs and cats, as long as the socialization takes place gradually and without forcing. For cats the matter is a little different, it seems in fact that he recognizes cats with curled ears like his and tends to get along better with them, while with cats with straight ears, he has a little more difficulty because he tends to dominate. His curiosity does not prevent him from approaching strangers and interacting with them immediately.  His liveliness and agility, however, also leads him to combine some small trouble in the house.

He is very intelligent and can even open the refrigerator, doors and cupboards. He recognizes his owner’s footsteps and rushes to the door when he hears them from afar. It follows its owner everywhere, even in the bathroom, so its behavior can be compared to that of a dog in many ways.

Appearance of the American Curl Cat

As mentioned earlier the main feature of these cats are the ears, which can have 3 degrees of different curl that makes them more or less valuable. There are two different varieties, short hair, almost without undercoat but with a shiny and glossy fur and long or medium hair, also with little undercoat but very soft. It is a cat of medium size, its weight ranges from 2.5 to 5 kilograms. They are very well proportioned, rather slender and moderately muscular. The tail is very long, wider at the base and tapered towards the tip.

The head is proportionate to the body, wedge-shaped with smooth contours. The eyes, very large in the shape of a walnut, obliquely positioned, are very expressive and benevolent look. Their color can be very varied from aquamarine blue, gold, yellow, green or uneven. Various are also the colors of the coat, as all colors are accepted for this breed, which is distinguished by the peculiarity of curled ears.

Kittens are not immediately born with curled ears, at birth they are straight, they will curve slightly after 5 or 7 days and will take 6 or 7 months to reach their final shape; they are wide ears that curve backwards, large, a bit lateral, with a rounded and flexible tip and with tufts of hair inside.

Care and Health of the American Curl Cat

The American Curl Cat is a healthy and robust cat that does not require special care.  However, the curled back ears can give health problems; the narrow ear canal can induce an increased production of earwax and a high risk of infections.  Therefore, proper and continuous ear cleaning is essential. It has a life expectancy of 13 to 15 years but in many cases even longer.

If its movement needs are respected, this breed does not tend to obesity, but in the absence of movement, due to age and diet if not cared for, it increases the risk.

For the care of the coat, no particular care is needed, just a brush every now and then and this breed does not lose much hair because of the almost non-existent undercoat, not even during the moulting period. For the teeth, nails and veterinary checks these are common to all breeds of cats.