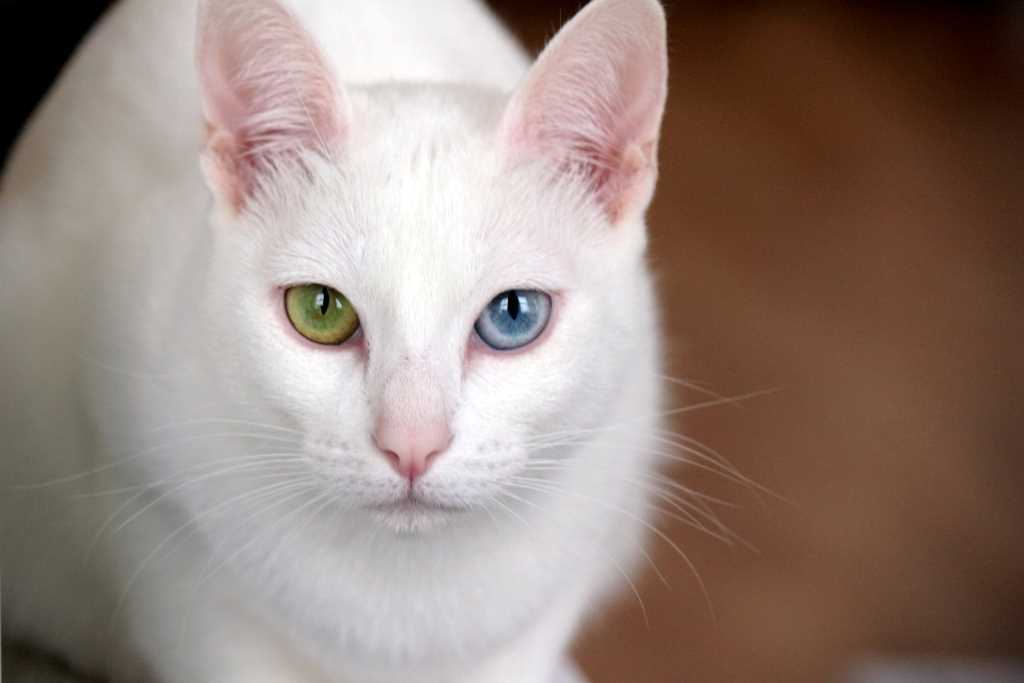 The Khao Manee cat is one of the rarest cats in the world, if not the rarest. Until the end of the nineteenth century no one knew of it outside of Thailand, where it originated, and even in that region there are not many of them and they have risked extinction. An endangered species specialist decided to import the breed to the United States to establish breeding farms and breed it. This was in 1999.

The breed is very old and was mentioned in the ‘Tamra Meow’, an illustrated manuscript from 1350, under the name of Khao Plort. In Thailand, its land of origin, it is considered a lucky animal, even the King of Siam, who ruled this region from 1868 to 1910, is said to have hidden these cats when the British and French arrived in these territories, for fear that they would be stolen by these foreigners. He gave them Siamese, passing them off as the royal breed, solely to preserve this species.

It used to be called Khao Plort, which means all white, while now it is called Khao Manee and is also known as the diamond eye cat, due to its truly spectacular eyes.

It was an American breeder Colleen Freymuth, specialised in the preservation of endangered species, who started a selection for the breeding of this breed. Later it was a Frenchman, Frédéric Goedert, who continued the breeding and for many years was the only breeder of Khao Manee in the West.

A curiosity: These extremely rare cats are also very expensive, starting from a minimum of 10.00 euro up to 15.000, which makes them one of the most expensive existing breeds.

Character of the KhaoManee cat

The Khao Manee is a very affectionate, curious, cheerful and very intelligent cat.  It is a very docile animal and particularly likes contact with its favourite human, whom it adores very strongly, although it is sociable with all members of the family, including animals.  It does not like to be alone, so it is not suitable for those who are away from home for many hours; in this case it is good to give it a feline companion with whom it can keep company.

Because of its patience and lack of aggression, it is ideal for children, who will find it a tireless playmate.  However, it appreciates moments of tranquillity in which to sleep, perhaps on its human’s lap. They are the classic flat cats, as long as they have a corner where they can climb, with some high shelves, a scratching post and some toys.

He likes to welcome people who come into the house and has a special feature, he is very talkative, communicating with a powerful meow for everything. He is quite noisy.  If properly introduced, the Khao Manee also gets along well with dogs.

Appearance of the Khao Manee Cat

The Khao Manee is a medium-sized cat, the male being at most about 5 kilograms, the female one kilogram less.  Its body is filiform and slender, agile and muscular.  It has an elegant figure, with slender legs, the front ones being slightly shorter than the hind ones.  The tail is thick, thick at the attachment, with a rounded tip.

The head is triangular, with very rounded features and accentuated cheekbones.  The medium-sized ears are very open. But the particularity of this cat are the eyes.  They are gem-shaped, slightly oblique, with a very penetrating gaze. They stand out very much against its completely white coat. The colour varies from very light blue to sapphire, emerald green and yellow. Very often they are two different colours.

The coat is short, smooth, adherent to the body and very soft, despite having almost no undercoat. The colour: strictly white. The nose, the pads under the paws and the skin are pink.  The kittens are also born pink and after a few months they begin to turn their characteristic colour, which is ermine white.

Health and care of the Khao Manee cat

The life expectancy of the Khao Manee is about 15 years. No predisposition to particular genetic diseases has been recorded, this cat can suffer from diseases common to all felines. In spite of being white, and normally all white cats have hearing problems, this cat seems to have less than other white breeds, although deafness can also afflict it.

As it has almost no undercoat, it does not tolerate the cold very well, so it is best not to expose it to draughts in the cold season. As far as its diet is concerned, it is not prone to obesity, but it should be given special attention with regard to its normal exercise.

As far as its coat is concerned, it is a cat that takes great care of its hygiene, so it is sufficient to wipe its coat with a damp cloth and brush it once a week. As it has almost no undercoat it does not lose much.