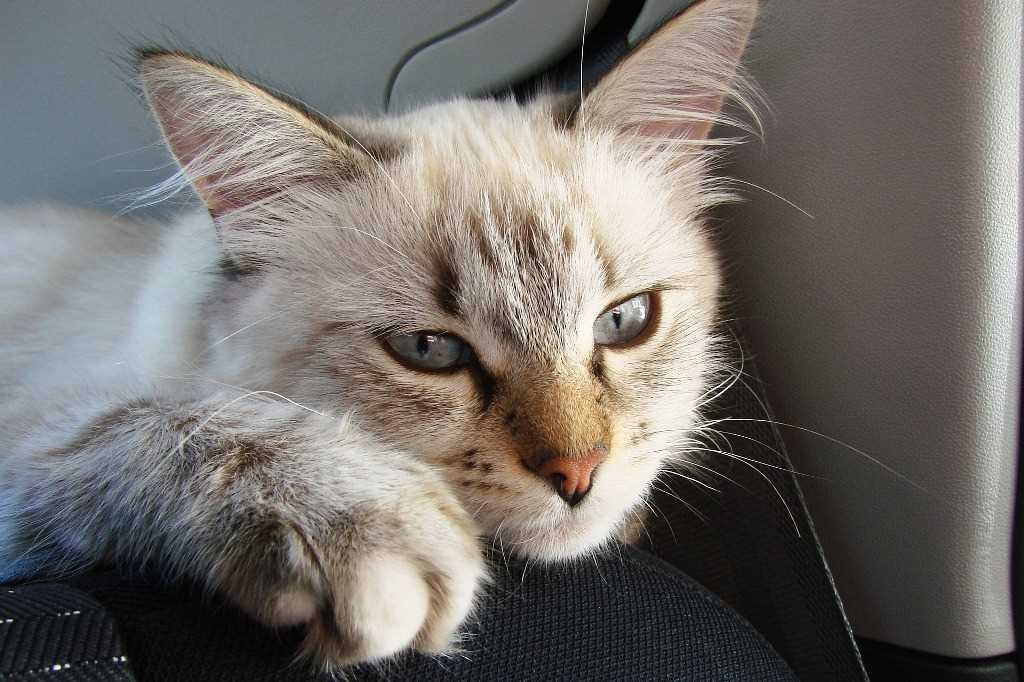 The Neva Masquerade Cat owes its name to the Russian river Neva, which runs through St. Petersburg, where Siberian cats with this colouring were found. In fact, the Neva Masquerade is nothing else than a Siberian cat with a point-coloured coat, i.e. with lighter extremities and blue eyes.

Its history is therefore intertwined with that of the Siberian cats, which have the same size and thick coat. Its character and natural instincts are in all respects the same as those of the classical Siberian.

Long-haired cats in Russia and Siberia have always been part of the domestic cat population living freely in forests, while in Europe and America they were not known at all until the 19th century.  At the end of the 90’s a real breeding programme for this beautiful cat breed took place.

Character of the Neva Masquerade Cat

Years of breed selection have made this cat, at first wild, quiet and discreet, but with a very independent attitude. It is a very sweet and sociable cat, which gets on well with children, with whom it loves to play, as well as with other animals in the home.

However, it has never lost its hunter’s instinct and has a great need for freedom and independence. It is therefore not the right cat for those who only see it as a flat cat. It needs space to move around, as it is a very active cat, jumping and running, so a garden or a large terrace, secured in a safe place, is just what it needs.

The female is a little more homely, while the male, if he manages to escape, can stay outside for several days or even never return.

It is intelligent, very curious and quite talkative, in fact it will not hesitate to make loud meows to attract attention. At home, it is always present, it adopts a human and will become his faithful companion, but it is also very attached to the family and the territory in which it lives, in fact it was also called a guard cat.  Today it is also used in pet therapy.

Appearance of the Neva Masquerade Cat

The appearance of the Neva Masquerade cat is very similar to the Siberian cat, both in build and coat, the only difference being, as mentioned before, the point colouring, i.e. with paler extremities and blue eyes. It is a medium-large sized cat, the male can weigh up to 12 kilograms, the female about 7-8 kilograms.

The body has a heavy and well developed musculature, the thorax is wide and the body is long. The legs are large and very vigorous, the forelegs a little shorter than the hind ones.  The tail is thick, of medium length, thick at the base, tapering towards the tip.

The head is wedge-shaped with rounded contours and very pronounced cheekbones. The ears are of medium size, covered with hair which also comes out very thick from the inside, the eyes are oblique, strictly blue and very expressive.

The fur of this cat is very thick and long, in winter the undercoat intensifies and is water-repellent, so as to cope with low and humid temperatures. The colour of the fur, as mentioned before, varies from that of the Siberian cat to the point.

This cat is one of the most hypoallergenic cats of all. This is due to the fact that it is not the fur itself that causes the allergic reaction, but a protein present in the cat’s saliva, called FelD1, which the Siberian Neva Masquerade produces in such small quantities that it does not cause an allergy.

Care and health of the Neva Masquerade cat

The Neva Masquerade Cat is a very robust and hardy cat and is unlikely to fall ill, as it is the result of natural selection and not artificial cross-breeding.  It loses very little hair, with the exception of the early summer period, when it loses its water-repellent undercoat, and needs very little attention.  In fact, its coat is not easily knotted and it is sufficient to brush it once a week to have it always perfect.

As far as its diet is concerned, it is a very active cat, always on the move, therefore it is difficult for it to have problems with excess weight if it can move, however its diet must always be controlled as it tends to eat with an appetite.

Roundcube does not display contact images in the message window

Restrict authors to display only their posts on WordPress