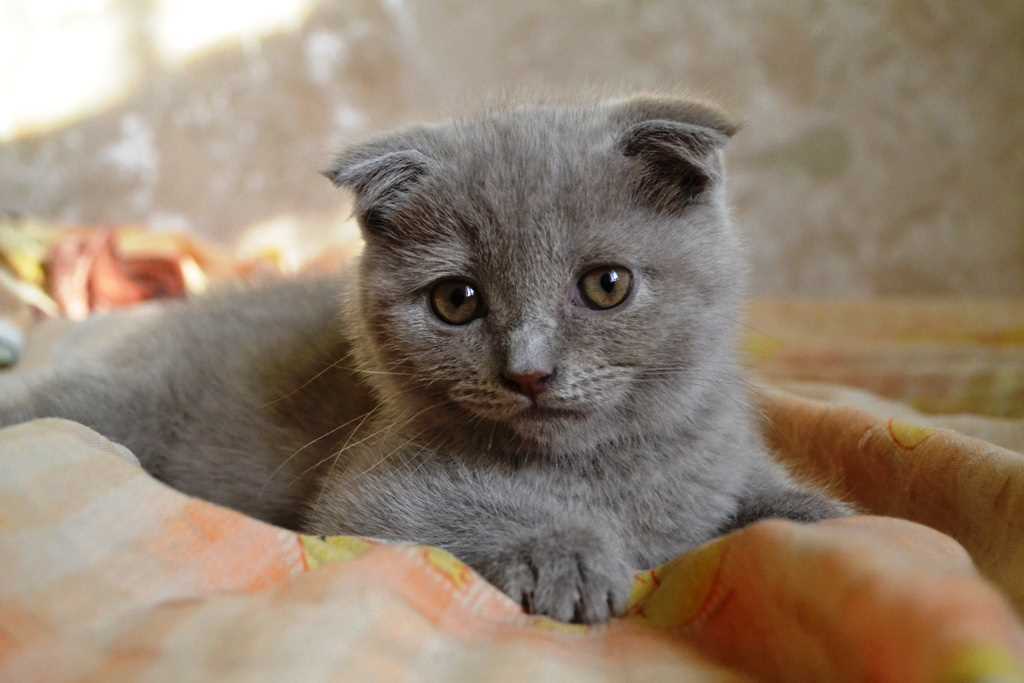 The Scottish Fold is a feline breed native to Scotland. Its most famous feature are its ears, small and bent forward. Its origins are very recent.  The first evidence that you have of a cat of this species dates back to 1961, when a Scottish breeder, William Ross, noticed a white cat with these curious ears. The kitten was called Susie and when in 1963 the kitten gave birth to two puppies with bent ears, was the beginning of the breeding of this breed.  There were several breeds with which the kitten was mated, including a specimen of British Shorthair and it was noticed that at least half of the kittens had the characteristic of bent ears forward.

This characteristic is linked to a dominant gene and therefore mating between cats of the same breed is strictly forbidden because of osteo-articular malformations caused by the Folded Ear (FD) gene. Crossbreeding between Scottish Fold and Scottish Straight (straight ear variety), with British Shorthair and American Shorthair is allowed.

Unfortunately over the years there were many health problems, such as joint malformations and deafness, so Mr. Ross sent several specimens to America where a scholar, Dr. Neil Todd studied in depth the Folder gene and several diseases have been prevented, although still this breed may be subject to the development of a skeletal abnormality called osteochondrodystrophy so the Scottish Fold can develop osteoarthritis at a young age.

It has a very sweet character, it is calm and docile and is suitable for living in the apartment even with older people who are not very active. The important thing is that it is stimulated with numerous physical and playful activities. If he has toys available he will be distracted and enjoy himself, but playing with his human is preferable, at least a couple of times a day.

He is a loyal animal and tends to become particularly fond of a person within the family, but also considers the other members. He is not a sticky animal, he prefers to be close to his human rather than on his legs. It is the most suitable type of cat for families with even small children, its desire to play and its docility attract children favourably, who, given its appearance, consider it a real soft toy.

Given the absolute lack of aggressiveness of this breed, even the relationships with strangers or those who occasionally attend home is good even if it takes a small period of adaptation to accept other people.

It gets along well with other cats and also with dogs, but does not like animals particularly agitated, so having other animals at home is advisable to install shelves where the cat can take refuge in case of need.

Vocally he is not too communicative and when he communicates he does so in a very subtle voice.

It ‘a cat of medium size, the weight of the male in fact can reach around 6 kilograms.

It is quite muscular with shorter legs than average compared to the body.

The body and the head are generally rounded and soft, in fact it gives the impression of a rather chubby cat. The ears, which are the characteristic of this cat, are small and well bent forward and downwards and slightly rounded at the ends.

The eyes are separated by a wide nose, large and round, giving the Scottish Fold a sweet expression, and can be aquamarine blue, gold yellow or green.

The hair can be both short and medium long, but in all cases it has a thick undercoat that increases its softness to the touch. It is dense, soft, voluminous and well distributed and can be practically any color or color combination.

The tail is very thick and of medium length, with a slightly rounded tip, it is flexible and tapered.

Health and care of the Scottish Fold

This cat needs a little more attention than many other breeds. Her hair should be brushed frequently enough, two or three times a week, to avoid knots.

During the moulting period, even once a day and it must be kept in mind that she loses a lot of hair and therefore a careful grooming is necessary to avoid the too many balls of hair that the cat can swallow by cleaning. Also the ears must be periodically cleaned to avoid bad infections, as well as the teeth.

She generally has a good state of health and an average life expectancy, from 12 to 15 years. It tends to gain weight and therefore its diet should be checked.