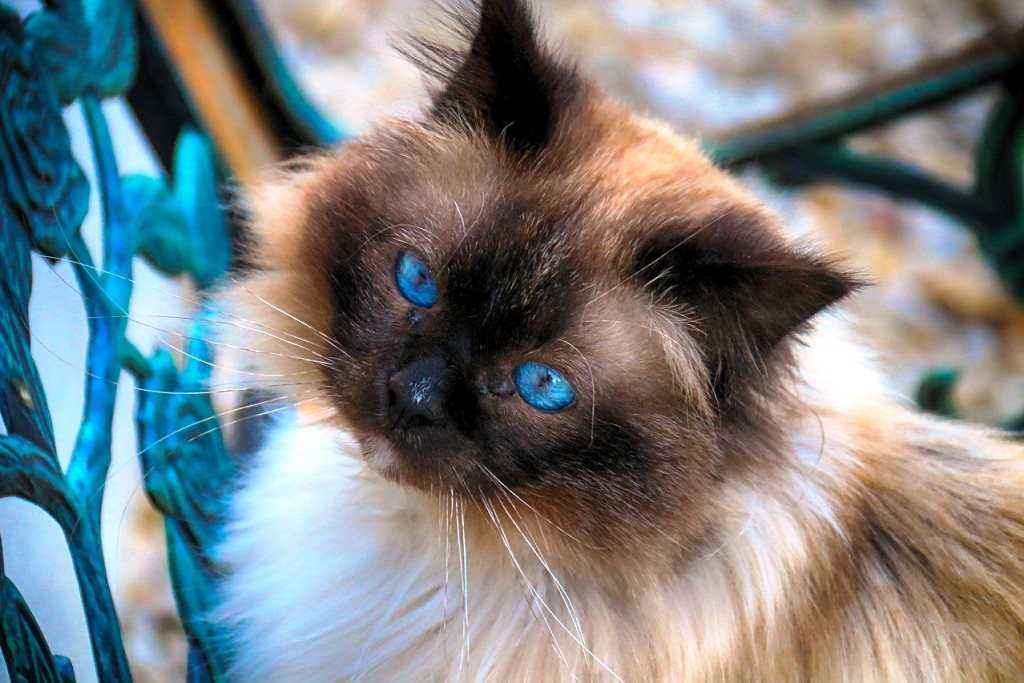 The Sacred Cat of Burma, as its name suggests, comes from Burma where it is considered a sacred animal. Little is known about its origins, so a legend was born. It is said that in Burma in a temple was worshiped a goddess with long golden robes and sapphire eyes.  In the temple lived Mun-Ha, a monk who had a white cat with golden eyes, named Sinh.

One day the monk was in deep meditation in front of the Goddess Tsun Kyan-Kse, when the raiders attacked the temple and killed all the monks. Mun-Ha was also killed and when his cat saw the monk lying on the ground, he laid his paws on him and looked the Goddess in his eyes as if asking for a miracle. Suddenly, Sinh’s white hair changed to a beautiful golden hue, her face, legs and tail darkened with the color of the earth, and the color of her eyes changed from yellow to a deep sapphire blue. The tips of her paws, however, remained white to symbolize the purity of Mun-Ha’s spirit.

All the other cats in the temple also underwent the same transformation and passed it on to their descendants. Thus was born the sacred race of Burma. The cat watched the monk for 7 days and on the seventh day he died, not having accepted food anymore, transporting the spirit of Mun-Ha to heaven. Still today it is believed that every time one of the cats of the sacred temple dies, the soul of a priest accompanies the soul of the cat to heaven.

In order to find specimens of the Sacred Cat of Biermania in Europe it is necessary to arrive at the beginning of the last century. There are two versions that tell how this cat arrived in France. The first one is that a couple of Sacred Cat of Burma was bought by a businessman Cornelius Vanderbilt, who bought a couple directly in a Burmese temple. The other is about two Westerners, Auguste Pavie and Major Gordon Russel, who helped the monks of the Tsim-Kyan-Kse temple to escape to Tibert with their cats when the temple was attacked by marauders. In gratitude the monks gave them a couple of cats. At this point the story becomes the same, in fact in France it is said that only the kitten arrived, the male died during the trip. But the kitten was fortunately pregnant and arrived in France had wonderful puppies.

It became a very popular breed in Europe, and the puppies were crossed with Siamese and Persians until they reached their present splendor. The breed, however, suffered a fearful decline during the Second World War, in fact, only a couple of specimens remained and not without effort was able to flourish the breed that since then has spread throughout the world. Today the Holy Cat of Burma is one of the most popular breeds among the long haired cats.

Character of the Sacred Cat of Burma

Besides being beautiful this cat has an extremely quiet and mild character, but also a strong and strong personality and is very intelligent.  It is a homely cat that adapts very well to apartment life, but it is also a great playful cat and can immediately make friends with the family with which it lives, even if you choose a human as a favorite.

He is territorial, but absolutely not aggressive, so he gets along very well with children. Only when the games get very turbulent he prefers to move to one of his favorite places to be quiet. A curious characteristic of this cat is that if there are cats or kittens, let them be the first to feed themselves, thus earning the nickname of “gentleman cat”. It suffers a lot the loneliness and especially the lack of the human being who has chosen as a companion for life.

He is very affectionate and this with all the members of the family, which tends to follow everywhere because he is very curious about every human activity. The Burmese people usually welcome people showing curiosity rather than fear.  For this reason it is good to control him because it is in his nature to follow anyone, even strangers. It is also quite accommodating with other cats and dogs, with which living together is usually quiet.

Appearance of the Holy Cat of Burma

The Holy Cat of Burma is of medium size. The females are more slender and elegant while the males are more powerful and have a more massive neck. The weight of a male can reach 7 kilograms, the females up to 4.5 kilograms.

The heart-shaped head has full cheeks and rounded forehead, the ears, of medium size, placed slightly tilted forward, well spaced with rounded tips. The eyes, well spaced and slightly almond-shaped, have an intense sapphire color and are very expressive.

The body is slightly elongated and robust, with rather short legs but well developed in terms of muscles. The tail is long and thick, with a rounded tip. The fur is medium-long soft and silky. It has no undercoat so it does not knot. The hair is rather short on the legs and muzzle, longer and thicker on the body. But the main feature of the Sacred of Burma are the gloves, that is the tips of the feet completely white. The colors of his fur are many, ranging from dark gray tending to black, to lighter gray tending to lilac, but also chocolate, red or cream.

Care and health of the Holy Cat of Burma

Due to the lack of a thick undercoat this breed of cats suffers a lot from the cold, so you have to be careful of cold temperatures and drafts. The hair, precisely because of the lack of undercoat does not tend to knot, so just a brush once a week to increase several times when you are in the moulting period, as it tends to lose a lot. The ears, eyes and nails require the same precautions as all other breeds of cats. It has an average life expectancy of about 10 to 15 years and does not suffer from any particular pathologies.

It does not tend to gain weight and is able to manage on its own with regard to the amount of food it needs. As far as food is concerned, however, the Sacred of Burma is notoriously finicky, so its food must have a strong palatability. It doesn’t make big meals, but small meals several times a day, so it is particularly suitable to eat croquettes that must be integrated at least once a day with wet food.