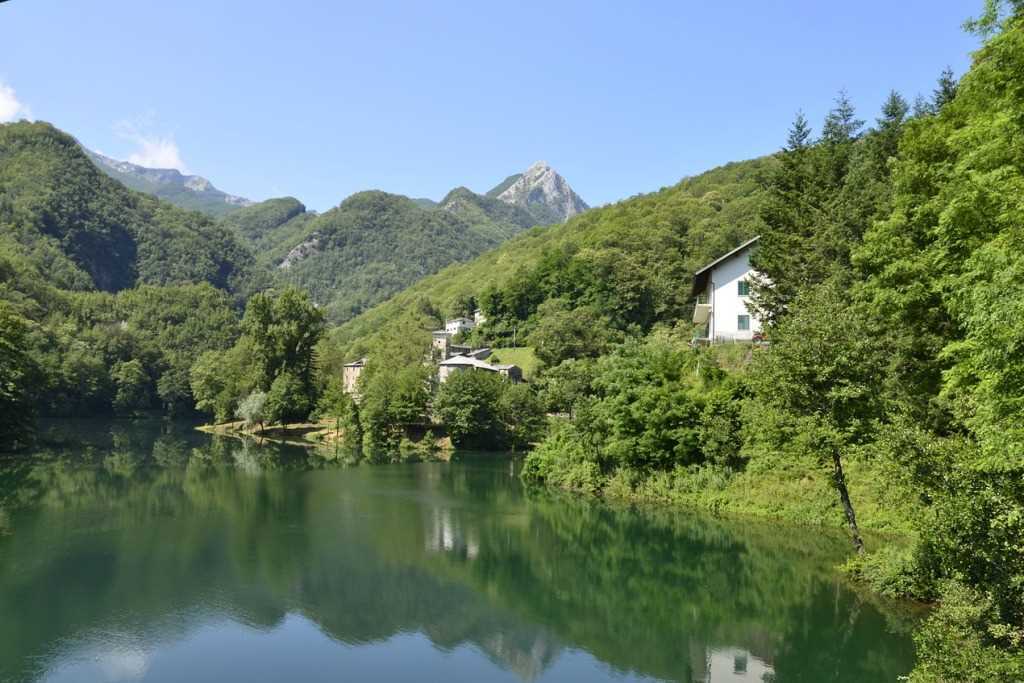 One day a few years ago, I went to Garfagnana for work. On the way I had passed through Lucca and Bagni di Lucca to get to Castelnuovo di Garfagnana, on the way back I had to get to Massa so I took another road from the navigator. Road that I had never done before. I traveled for a long time in a very narrow valley, finding few houses or small villages. At a certain point behind a curve I was faced with a panorama that I had absolutely never expected and since there was no traffic at the time I stopped.  And I saw a village on the shore of a small lake, surrounded by chestnut woods and high mountains. It suddenly seemed to me to be catapulted into the Middle Ages.

I could hardly believe my eyes. I got back in my car and approached the village with the intention of visiting it.  The little houses of the village are made of stone with slate roofs and walking through the small streets you can breathe a magical air. I descended into the village among stone houses, wrought iron street lamps, iron and wooden railings with ancient designs and many flowers I went down to the big church on the shore of the lake. In front of a beautiful meadow that slopes gently down towards the lake. And then again a small pier on the lake very picturesque.

The color of the water is as spectacular as the reflections of the mountains reflected in its waters.  I wanted to know more about this enchanted place and I stopped at a small bar always in stone with a beautiful terrace with many flowers and I learned that several houses, which have been renovated respecting the environment, are part of a hotel, so you can rent rooms. Making a vacation in this place must be really relaxing between beautiful walks, fishing in the pond, where I am told there are many trout and excursions to nearby places that tell me very interesting.

Already in 1260 we have news of this small village, in 1500 the church was an oratory with an adjoining small hospitable where they sought shelter for the needy and the sick. In 1600 the structure was restored and became the church that we still see today, dedicated to S. Jacopo, whose feast is celebrated on July 25. The bell tower was added only around 1800. Until the post-war period the village was bigger than what we can see now and there was not a small lake, but a stream.

In 1948 was built the hydroelectric dam that now forms the lake, but some houses, the mill and the bridge that crosses the stream were submerged and slowly after those years problems of stability for the town due to the big daily excursions of the electric company that had built the dam. Problems that were solved over the years but by then the people had abandoned the village completely. Until the year 2000 when this small town was the object of an overall renovation project that aims to revive this unique village, which today is proposed as a widespread hotel welcoming many people throughout the year. Because if it is wonderful in summer it is very beautiful and characteristic also in winter and in the other seasons.  A little jewel that you do not expect inside the Apuan Alps that is really worth a visit.