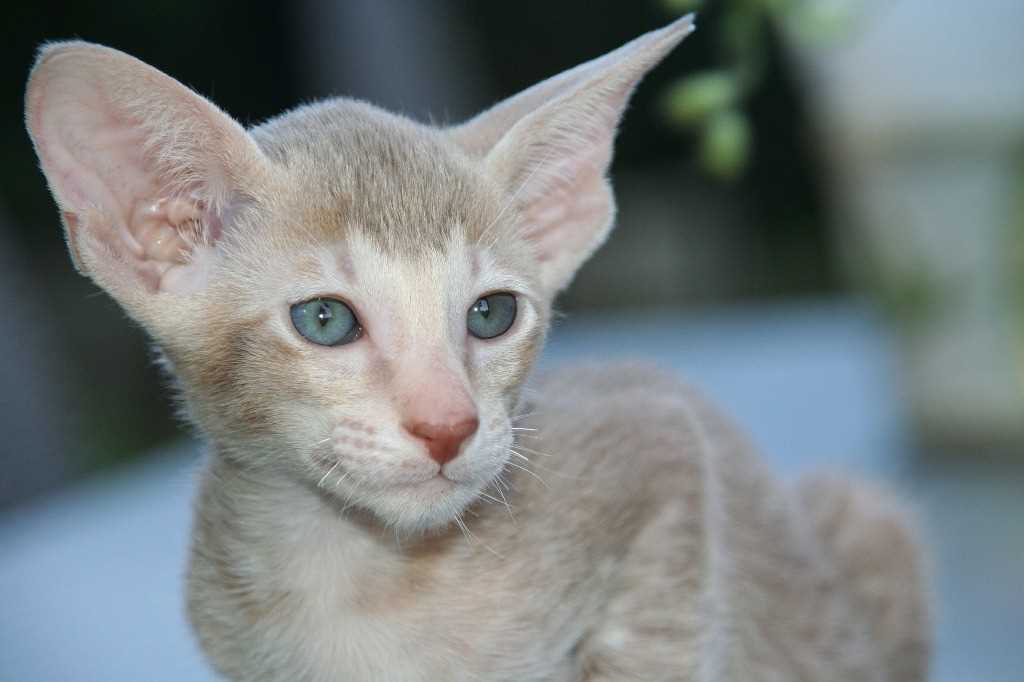 The Oriental Cat comes from Thailand which in ancient times was called Siam and has much in common with the Siamese cat. In this nation it is a very well known cat and it is also one of the oldest documented breeds.  In the capital of Siam, Ayuda, it has been found a very old book, “the poem of the cat”, which reports numerous illustrations of such a cat, with brown, blue, white and silver coat. In Europe and America it has not been a breed particularly appreciated by the breeders and has made its appearance in Europe in the 50’s. They have been made crosses of Siamese with many breeds, creating many different breeds depending on the color, this division race-color we realized very soon that could not work so the breed was divided into two groups: Oriental short-haired and Oriental semi-long haired. Since the 70’s, however, with the official recognition of the breed, there has been a worldwide diffusion of this breed which today is very appreciated both in Europe and in the United States.

As already said it is very similar to the Siamese which has blue eyes and colored hair tips, while the Oriental has green eyes and solid color. The semi-long haired Oriental was obtained by crossing short haired Orientals with Balinese cats.

The Oriental Cat has a sociable and affectionate disposition, but has a strong, determined and unpredictable character. It is very attached to its owner with whom it wants to share many of its daily activities. It is not suitable for those who are away from home for several hours because it suffers from loneliness and if left alone for longer tends to make small disasters in the house, such as tearing curtains, scratching furniture and peeing around the house. It therefore needs constant attention and given its lively temperament, it must also have the opportunity to do a lot of physical activity. It is very suitable in an apartment as it loves the warmth and comfort of home. Ideally, however, you should have a garden where the cat can give vent to its liveliness by climbing and running wild. It suffers a lot from the cold, therefore it must be well covered when going out in winter.

It loves very much to stay in your arms and feel wanted and cuddled. He gets along well with children as he is not aggressive at all and is very playful. He also gets along well with cats, dogs and pets. Hardly fearful, but very often proves to be a bit intrusive, it is not afraid of strangers, on the contrary, it goes immediately to meet them, sniffs them repeatedly and since it is very curious, if it can, it also tries to rummage through their things. Very independent, they like to go out for walks and adapt easily to the leash, they love to travel with their masters and tend to communicate a lot with meows with which they ask for cuddles or food.

Appearance of the Oriental Cat

The Oriental Cat is a feline of slender build, medium size, males reach 5 kilograms, females a kilogram less or so, the gait is very elegant, snappy, agile and muscular.

The muzzle is pointed, the ears are long and pointed, wide at the base and widely spaced, large, giving the head the classic elongated triangle shape, the eyes are almond-shaped and normally green, slightly oblique make its face even more harmonious to the eye. The tail is very long.

The hair, fine, shiny and silky is short in the specimens with short hair and medium length in others. It is very soft to the touch, with no undercoat, for this reason it fears the cold very much. As for the colors, all are allowed, from white to black, even the blue, which is actually a fascinating gray tending to blue is very common. They can also be two-colored, tiger, silver, tabby, etc..

Care and health of the Oriental Cat

As far as the hair is concerned, the Oriental Cat, being devoid of undercoat, loses very little and does not need special attention, just a brush once a week and during the moulting period remove the dead hair with a chamois cloth. For the rest, cleaning of the ears, teeth and nails refer to the care common to all cats.

The oriental cat is a very robust cat without common health problems; the average life span is about 15 years. It must be well protected from rain, cold, humidity and drafts that could cause respiratory problems.

For feeding, this cat needs a caloric intake adequate to its energy needs, but you must control the amount as it tends to eat more than it needs.