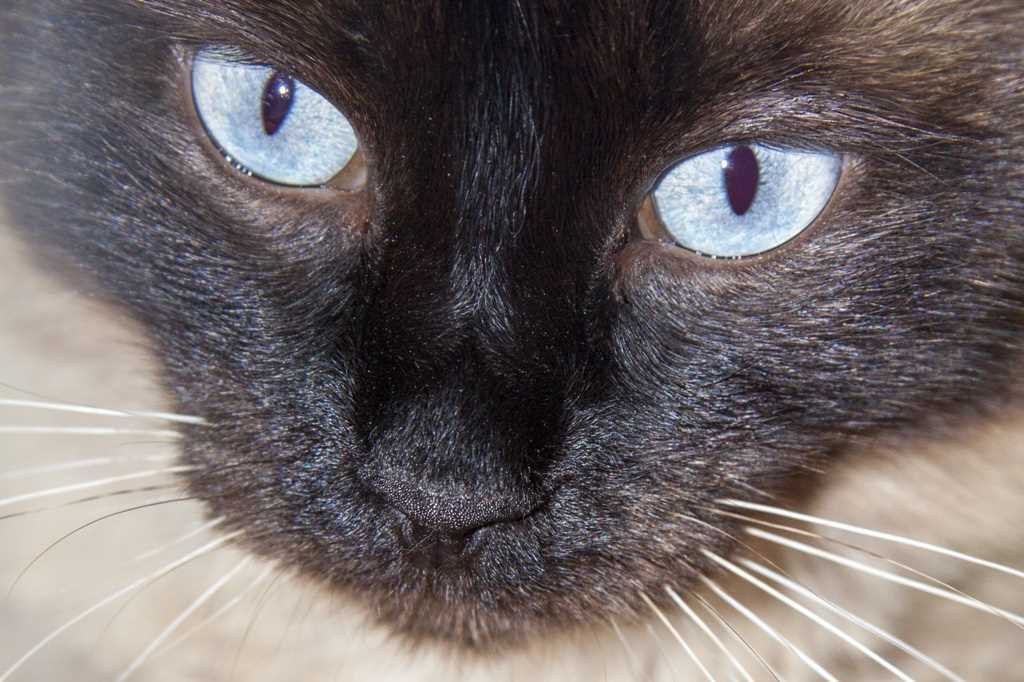 The Balinese Cat is a man-made feline breed. It is very similar to the Siamese, with the difference that it has a semi-long hair. It happened in fact that in the litters of Siamese cats was born every now and then a specimen with semi-long hair, but it was not considered as not in standard with the Siamese breed. It was only in 1950 that some breeders noticed this cat with semi-long hair and decided to create a separate breed. At first it was called longhaired Siamese, but then in the United States it was classified in the category of Siamese and Oriental cats. The name Balinese is American and comes from the association between the sinuous movements of the cat very similar to that of the female dancers of Bali.

Another difference with their Siamese cousins is that they are much longer in build, have a silky coat and a very thick tail with very long hair.

Character of the Balinese Cat

The character of the Balinese cat is very similar to that of the Siamese. They are curious, sociable, intelligent and have an excellent ability to communicate, which often translates into a frequent use of their strong voice, with which they respond to calls and try to make themselves understood.

This breed is considered one of the most intelligent in the world, if not the most intelligent in absolute. They can be taught a variety of tricks and games, they will learn very quickly to retrieve, if you want you can teach them to jump through hoops and stand on their hind legs to claim a prize. They are very affectionate with all the members of the family, but they have a marked preference for one in particular with whom they establish a very close relationship and cannot bear to be away from it for any length of time. If they feel neglected or left alone for a long time, they know how to express their disappointment and it is not uncommon for them to vent their anger with household objects.

It is not a cat suitable for the elderly, for whom it is a little too playful and is very active, it does not spend much time idling or napping, rather it is suitable for a young family, especially with children with whom it will get along very well. He is absolutely not aggressive and has a lot of patience. He particularly likes to play so it is good to provide him with stimuli and spend time with him. Although he adapts very well to living indoors, however being very active, he would need a safe garden to run and climb. It is a born hunter so from the outside it tends to bring its owner treats that are not always very welcome.

It adapts well to live with cats, especially if of its breed, for others a certain period of adaptation is necessary, but usually the coexistence is peaceful. It also gets along well with dogs, if presented in an appropriate manner. The important thing is that he has a place of his own where he can retreat when he wants to be alone and in peace. With strangers it does not have great problems, being a very hearted cat. If he feels like it, he won’t have any problems going to meet them. Just don’t force him.

Appearance of the Balinese Cat

This breed has an athletic and long-limbed build, and in this it resembles the Siamese, but unlike it, the Balinese has a much finer and superb bearing. It has a rather fine bone structure that gives it a natural elegance. It is a medium-sized cat, the male can reach a maximum of 5 kilograms. It has long, thin legs and tiny paws.

The head has a triangular shape, the ears are large, pointed, wide at the base and aligned with the contours of the head. The eyes are almond-shaped and of an intense blue color.

For the color are allowed various shades, the important thing is that the color is uniform and degraded, little by little, from the darker shades of snout and legs, to lighten on the back. The coat is long and silky, on the neck, shoulders and tail is distributed most of the thick fur, has no woolly undercoat. The tail is thick and long.

Health and care of the Balinese Cat

As far as care is concerned, this cat needs to be brushed at least two or three times a week, as the long coat may tend to tangle. In the moulting period, more often. It almost does not lose hair as it has no undercoat. It is a water lover so a bath every now and then is appreciated.

As for feeding, it is a very active cat, so it is always hungry, it is good to control the amount of food given as it tends to eat more than it needs.

It has a long life expectancy ranging from 15 to 20 years. As far as health is concerned, the Balinese has the usual problems of the Siamese, and especially at a young age it is possible for it to develop respiratory infections. In addition, the Balinese has a higher risk of hypertrophic cardiomyopathy than many other breeds.