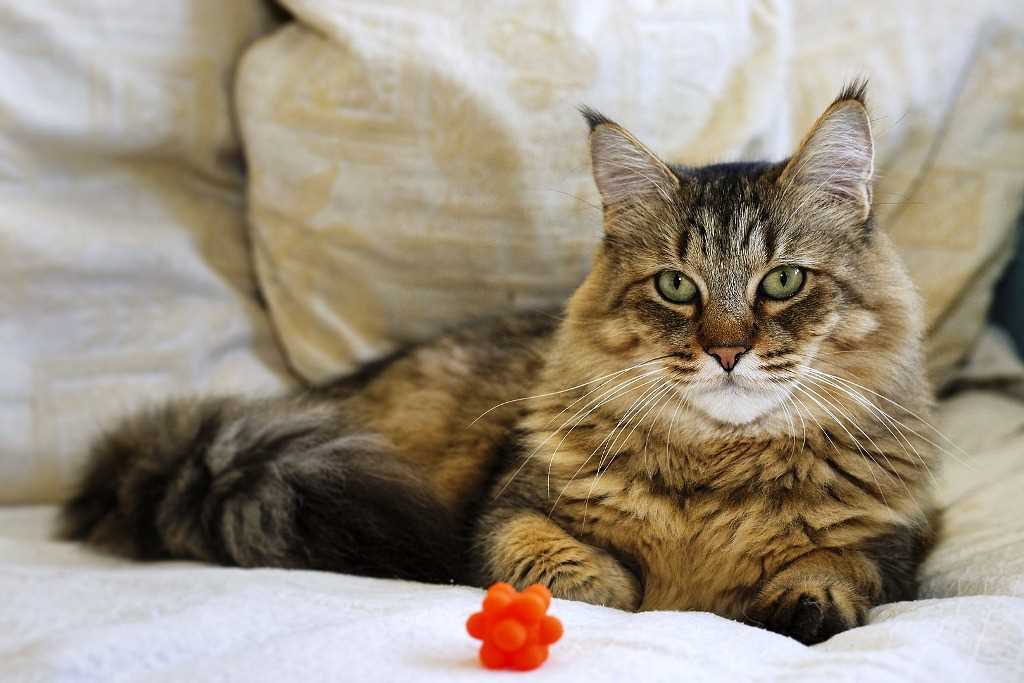 Pixie Bob is a big cat that looks like a lynx. This is what an American breeder, Carol Ann Brewer, was aiming for when she found an undernourished kitten on the street that weighed 8 kilograms and brought it home. It was 1985 in the state of Washington, USA. This cat, very similar to a Bobcat, had a short tail and was mated with a polydactyl domestic cat (i.e. with a higher number of fingers than normal) and from this mating several kittens were born and Mrs. Brewer decided to keep with her a specimen with a spotted coat and reddish hair that she named Pixie.

This is in fact the ancestor of the current breed of Pixie Bob, named after its founder. This kitten also had a short tail and was polydactyl. In fact, it had 7 toes on its front paws and 5 on its hind ones.

Character of the Pixie Bob cat

In spite of its wild appearance, the Pixie Bob cat is one of the most sociable feline breeds and is always ready to receive cuddles, purrs and snuggles. He is a big softie, very affectionate and very attached to his family, whether it is one person or many.  The Pixie is the ideal cat for flat life, in fact it is a rather lazy cat who loves to laze around and sleep on beds and sofas, but does not disdain playing, indeed a little activity is indicated for this kitten.

It does not like to be left alone, but adapts itself as long as it has some toys at its disposal or even a cat or dog friend, in fact it gets along well with both.  This cat is also an excellent companion for children, both at play and at rest. They are very intelligent cats and it is not uncommon to see them playing fetch or learning to walk on a lead.

They do not meow much, but express themselves through a very particular vocal style that is more like the chirping of birds, to express their affection or requests, mostly for food. As a good explorer, they do not disdain climbing, jumping and staying in elevated positions from where they can keep everything under control, and although they are very domestic cats, they do not disdain open spaces, so a little time in a garden or on a terrace in safety will certainly please them.

They are very curious, so strangers do not frighten them; on the contrary, they will be at your side to welcome guests.

Appearance of the Pixie Bob cat

The Pixie Bob is a large cat, muscular and powerful, but with a slender physique, so it moves with great elegance. In fact, it looks very much like a wild cat, not least because of its typical upward curved back. The male can weigh up to 8-9 kilograms, but there is also talk of specimens weighing up to 10, with the female usually weighing a couple of kilograms less.

Its peculiar characteristics are the tail which is very short (about 5 centimetres or a little more) and the polydactyly, which as I wrote above is an increase of the toes compared to the normal.

The head of the Pixie Bob is pear-shaped with a prominent forehead. The eyes, slightly triangular and a little sunken, have gold, green and blue colours. The ears are rounded at the top and are adorned with a lovely tuft of fur.

The coat can be short or long, but always very thick, silky and waterproof, with a woolly undercoat. The coat colour of this breed is spotted tabby brown. The most appreciated tones are those turning towards warm colours. The pattern of the coat is spotted or striped.

Care and health of the Pixie Bobcat

The life expectancy of the Pixie Bob cat is quite long, averaging around 15 years, but there have been reports of them reaching 20 years. They have no problems with cold temperatures, but they do not tolerate heat very well.

They are generally a healthy breed and do not suffer from any particular diseases.  The Pixie is rather greedy, therefore it will be good to guarantee a diet adherent to their lifestyle to avoid them getting fat and lazy.

As far as their coat is concerned, they don’t need any particular care, it is enough to brush them a couple of times a week, but particular care must be taken when brushing the tail as it tends to get knotted much more than the coat, and it is also a very delicate part. It is also a good idea to clean its ears regularly as they have hairs in which dirt and earwax can accumulate.