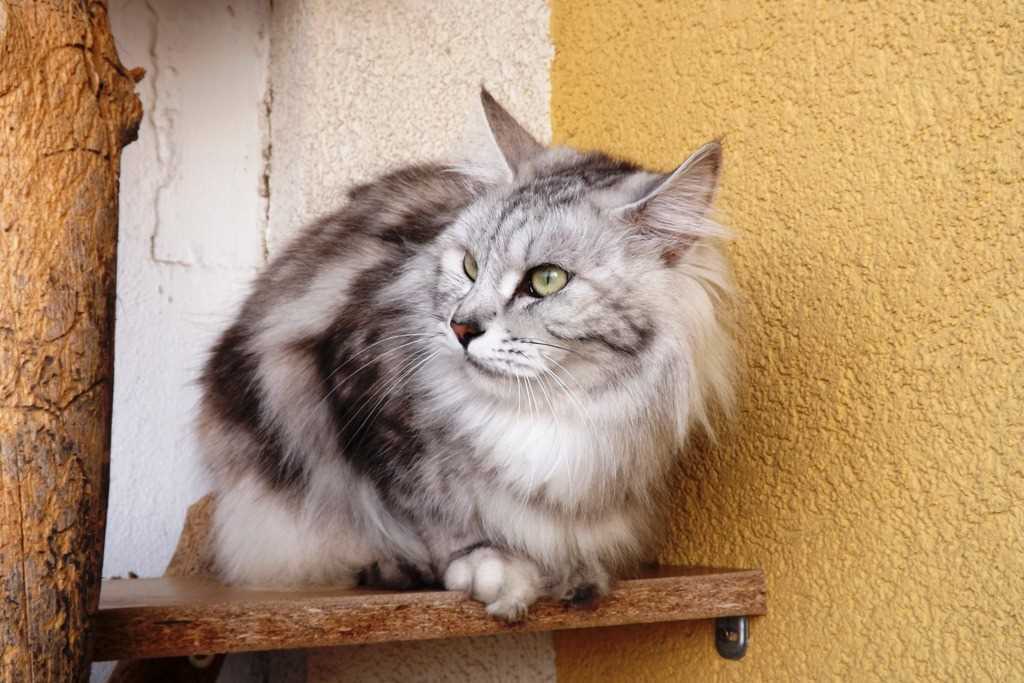 The Kurilian Bobtail is a natural cat breed originating from the Kuril Islands in the Pacific Ocean.  The origin of the breed probably comes from the Japanese Bobtail, which also originates from the Kuril Islands. Compared to the Japanese, the Kurilian is larger. Most probably some of these specimens were bred as domestic cats, and by mating with traditional cats they strengthened their gene pool to withstand the harsh temperatures of the area.

Nowadays this cat is very rare, known mainly in Russia. The Kuril Islands have been disputed between Russia and Japan for a long time, so it is assumed that the Russian military brought back specimens of this breed to their homeland, where in a short time breeders were established and this breed is highly appreciated in Russia for its appearance and character.

This cat is a very skilled hunter and also fisherman.  Mice, small game, but also snakes and rabbits and even salmon when they come up the river to lay their eggs. In the Kuril Islands these cats live free, building their dens out of bamboo and grass, very often near waterways because they are skilled fishermen and swimmers.

They are very faithful animals, it is said that when they have chosen a mate, it is for life, and even the male helps in the growth of the offspring and teaches them hunting and fishing. The characteristic is the Bobtail’s pony-like tail, but slightly larger than the others. It resembles a small lynx.  And it has a wonderful character.

Character of the Kurilian Bobtail

Despite their wild origins, these animals are very affectionate, sociable and housebroken. They are neither aggressive nor rowdy, but gentle and intelligent.  They are very loyal to their owners and are easy to train, so much so that they learn games such as retrieving and even being taken out on a leash.

They love to be looked after and cuddled, but also maintain their independence. In fact, they don’t mind being left alone for a few hours. As already mentioned, they are suitable for living in a flat, but appreciate being able to do some exercise, climb trees and even hunt some small prey. They also love to play with water and, being excellent swimmers, will not hesitate to jump into the water if they get the chance.

They adapt well to changes and even strangers do not frighten them at all, on the contrary, their innate curiosity will encourage them to accept caresses and cuddles immediately. As they are well-balanced and sociable cats, there are no problems with living together with other animals in the household. They have a lot of patience and are therefore also suitable for playing with children.

Appearance of the Kurilian Bobtail Cat

The Kurilian Bobtail is a medium to large cat, with males weighing up to 7 kilograms and females a couple of kilograms less. It is a very athletic, muscular and robust cat, the front legs being shorter than the hind ones. Its peculiarity is its tail, which is very short (5 to 7 centimetres) and resembles a pom-pom.

The head is large, trapezoidal but with soft contours, full cheeks and a well-developed chin. The ears are wide at the base and slightly inclined forward, the eyes are round, well spaced and in harmony with the colour of the coat.

The coat of the Kurilian Bobtail can be short or long, it is dense but fairly fine, while the colour can be of any type and pattern. It is a cat suitable for people with allergies.

Care and health of the Kurilian Bobtail Cat

The Kurilian Bobtail is a very healthy, robust and strong cat. There are no known genetic diseases typical for the breed. The veterinary checks common to all types of cats are appropriate, such as cleaning the ears with suitable products and cutting the nails.

As far as diet is concerned, in the wild this cat is accustomed to eating raw meat and fish that it obtains itself, so a diet based on these elements is excellent for it. It has no tendency to gain weight.

For grooming, short-haired cats can be brushed once a week and long-haired cats two or three times to avoid knots. They moult in the spring and a lot of care must be taken with their coat in that period.