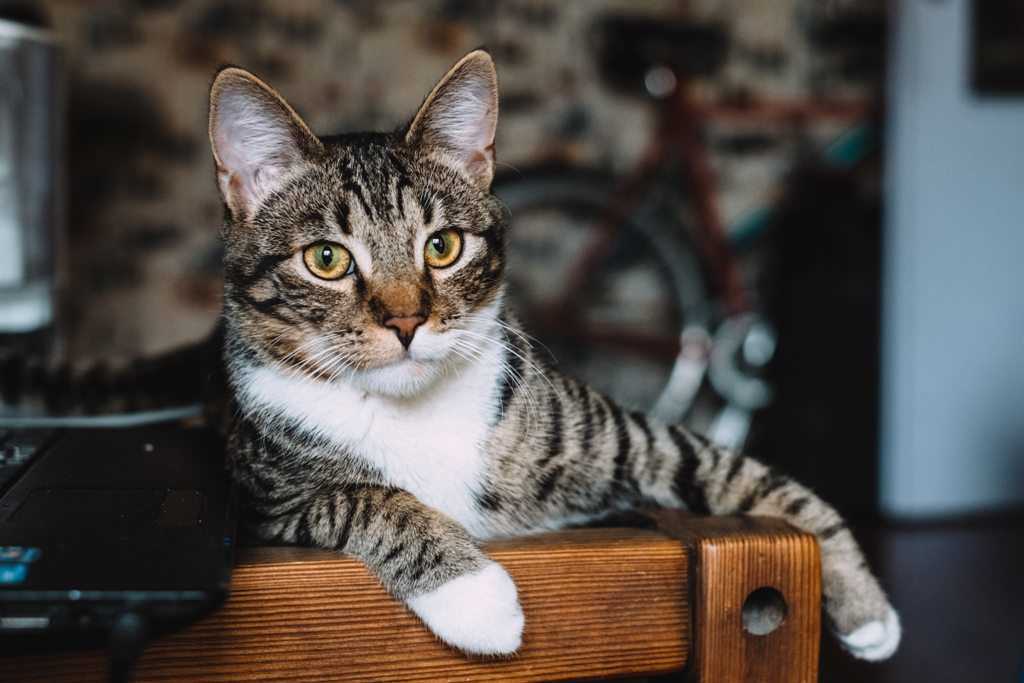 The Sokoke Cat originates from Kenya and is a very rare cat. It owes its name to an Englishwoman living in Kenya, Jeni Slater, who found, at the edge of the Sokoke forest, a cat with her kittens. She took them in to breed them. A Danish friend of hers then brought a couple of these cats to Denmark where she started a breeding farm.

In Kenya it is called Khadzonzo which means tree bark because of the coat of this cat, which is mottled and very similar to tree bark.

It is thought that this cat has been around for many centuries in Kenya, living in the trees in the wild and feeding on insects. Nowadays Sokokes are very rare and are imported from Kenya to avoid inbreeding.  In addition to Denmark, the breed is also bred in the United States, Canada and Norway.

Character of the Sokoke cat

The Sokoke cat has a very independent character, although it adapts well to living indoors as long as it has an outdoor space where it can give vent to its desire for freedom. It is a very active cat, curious, but also very affectionate towards its family.

Its nature is a little wild, which is why it adapts to living with other cats or with a dog, but only if it is accustomed to it from puppyhood. If he has the chance, he will not hesitate to dive in to catch a fish. It is intelligent and astute and learns very easily.

Its wild nature means that it stays out of the house for many hours a day, and its curiosity would lead it to stray far away, so it is a cat that should be kept in a safe garden to avoid losing it, and at the same time it cannot be kept alone in a flat.

This dynamic specimen is not the ideal cat for a calm or elderly person, as it needs to be physically stimulated and to release energy.

Appearance of the Sokoke cat

The Sokoke cat is medium-sized, slender and well-muscled. It has an intermediate appearance between a wildcat and a domestic cat. Its limbs are long and slender, ending in oval legs, with the hind limbs being slightly longer than the front ones. The tail is not very long but very tapered.

The head is small in relation to the body, it is wedge-shaped, with a straight nose, leading to a firm chin. The ears are not very large and rounded at the top. The eyes are large, slightly almond-shaped and vary in colour from light green to amber.

The coat is very short and thin, almost without undercoat, shiny and adherent to the body. In terms of colour and pattern, its fur is very distinctive. Brown in colour with the characteristic black tabby markings. It really looks like the bark of a tree.

Care and health of the Sokoke cat

This cat is quite robust, but as it has almost no undercoat it is sensitive to low temperatures. The average life expectancy of this cat is about 12-14 years, but some cats can live to be 20 years old.

As far as the care of its coat is concerned, this cat does not require any particular attention. It does not lose much hair, as it has almost no undercoat except during the moulting period, so for shine it is sufficient to brush it a couple of times a week and polish the hair with a buckskin cloth. It is also necessary to clean the ears from time to time with a specific product and trim the nails with special scissors.

Finally, its diet does not require any particular attention, but as this cat has a big appetite, it is necessary to make sure it takes exercise to avoid becoming overweight. It prefers meat, which it loves, but both fresh and dry food can be used.

Can one die for love?