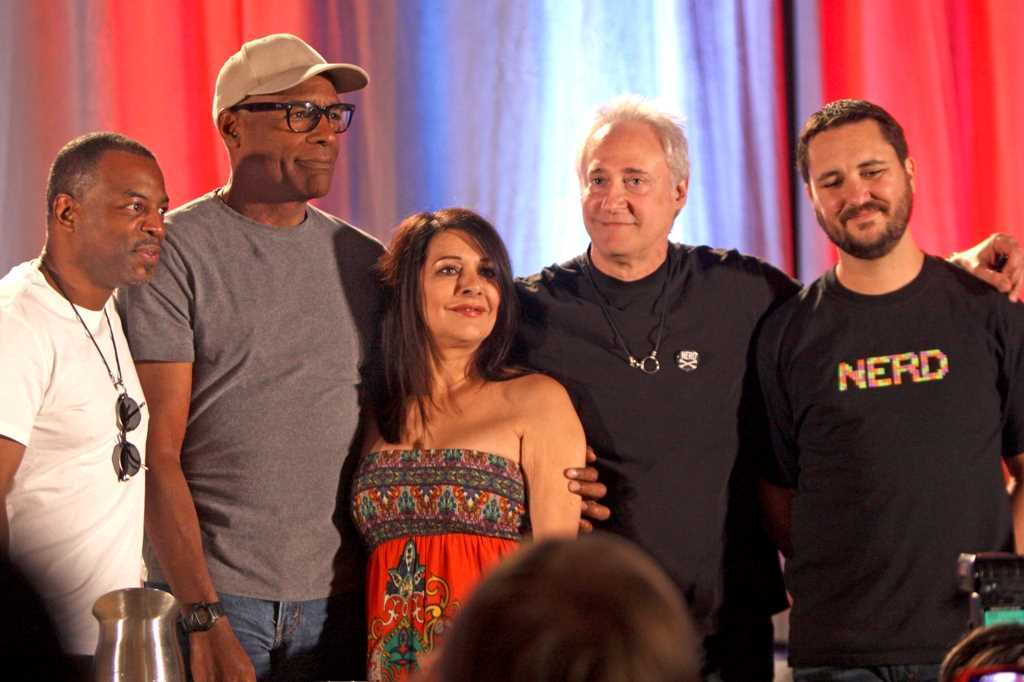 20 years after the mythical ship of Captain Kirk, we find the starship Enterprise with a new look, a new crew, a new way of facing space. It’s been 20 years since the first television series, but about 78 as far as the history of the United Federation of Planets is concerned, but there are still Klingons, Starfleet, Romulans and Vulcans.  This new series wanted by the creator of the first Gene Roddemberry, struggles a bit to take off, but despite initial criticism, has become the most popular and loved series. It’s the characters themselves of the series, starting with Captain Picard (in my opinion the most beloved captain of the Star Trek series) his second William Riker, and many others of whom I’ll tell you more in detail that have marked the success so great for this TV series. They are very different characters, but united by feelings of respect, friendship and fraternity. The characters never question themselves or their companions, it is always external situations that create problems.

So many innovations in this series, starting with the holodeck. This is a technology that allows you to immerse yourself in virtual worlds so perfect that they seem real. It is used on the spaceship Enterprise as a recreation for the crew, but also as a test for new technologies and to safely allow tests that otherwise would have brought risks for those who had carried them out.  And it allows in total safety to visit worlds of the past, with characters from the past, to create environments and stories that develop according to the interaction of the main character(s). So you can climb mountains, fight with Klingon warriors, go boating, walk on a beach. Everything that can be imagined can become real in this fantastic place. And then there is Data, which in my opinion was the most appropriate innovation in the series. The android, so similar to the human being that he really wanted to be one, with his search for emotions, slowly in the series came very close to us and his death in the last episode is the proof. But his dialogues with his colleagues are unparalleled, when he was trying to understand why a behavior, perhaps even trying to give advice. And his trying to paint, to act, to behave in every way like a human being, even to the point of having a romantic relationship (as he calls it), his cat and his friendship with Geordi La Forge, make him a character that I think everyone liked him. I could not imagine that series without Commander Data.

Another character that I liked very much is Q, that enemy, friend of Captain Picard, that almighty alien who sometimes sneaks into the spaceship. Sometimes he seems boastful, full of himself, but sometimes his human side and his satirical character shines through from the omnipotence. He amuses himself by combining sometimes very big troubles to the Enterprise and its crew, he also helps to solve them, even if he always behaves ambivalently. It is through him that the crew of the Enterprise will get to know the Borg, who will be the most feared enemies in this, but also in other Star Trek series.  And another minor character that fascinates me is Guinan, who under the apparent role of bartender on the forward bar of the Enterprise, is much more than that. Her wise advice proves to be valuable to Captain Picard, who has unlimited confidence in her. Very old, she is said to be 700 years old, of a very long-lived race, we do not know how she came to the Enterprise and her relationship with Captain Picard is very close, although we do not know why.

Another charismatic character in the series is Wolf, the Klingon. He was supposed to be a secondary character in the series, but he ended up becoming one of the main characters. Initially the role of security commander was played by Tasha Yar, who dies after a few episodes and is replaced by Worf. Her character is very Klingon, that is, touchy and proud, but also strong and proud. However, she is also a character in whom one can have full confidence, and who would not hesitate to offer her life for a just cause. And now we come to Captain Picard, very different from Captain Kirk, much more thoughtful and who likes to resolve disputes through dialogue and confrontation. But even of him we can say that his crew has blind faith, he is gruff on the surface and not very prone to chatter, but everyone knows they can count on him in emergency situations.  A man of great moral integrity, consistent and absolutely not inclined to violence, this makes him a point of reference. He cares so much about life that he refuses even to exterminate the Borg, despite everything they have done to him.

There are also other not minor characters that must be mentioned, such as Counselor Troi, Dr. Crusher, her son Wesley, Commander Riker, and La Forge, who together with all the others form a truly formidable crew in every sense and who leave their mark in many episodes of this successful series.