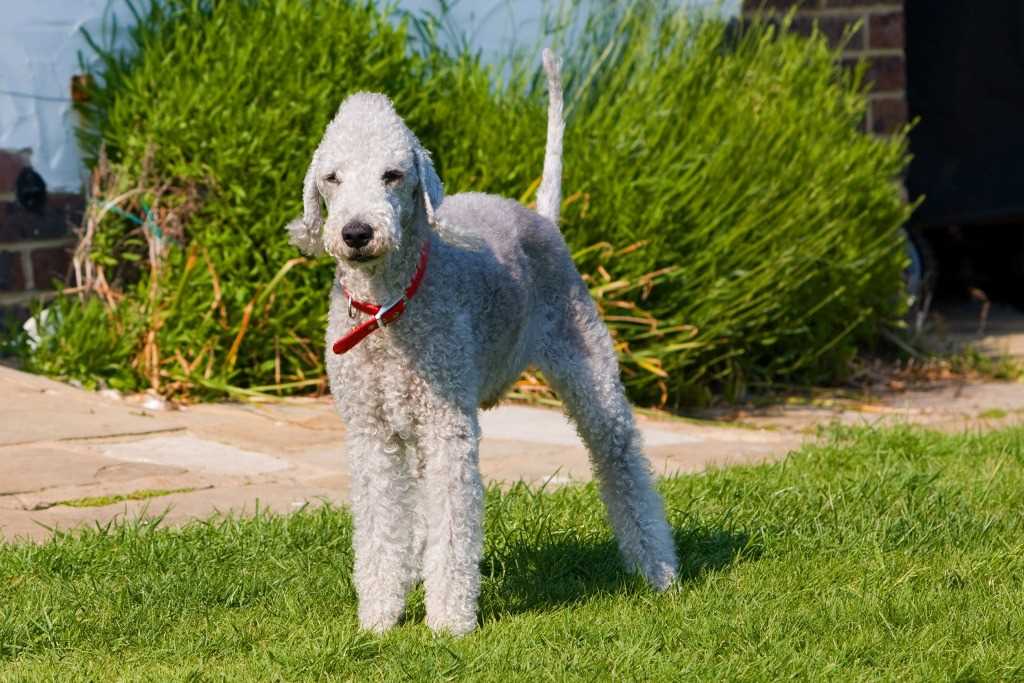 The origins of the Bedlington terrier dog breed are very controversial. It takes its name from a village, Bedlington, a small town near Rothbury in Nothumberland, where similar dogs were reported around 1820. In this mining town they served mostly as hunters of small animals such as hares and foxes, and also to hunt mice in the mines and other vermin, for fights and also for racing. Over time, the breed’s characteristics slowly changed, becoming a longer-legged dog. In the 1900s, when its aesthetics became more elegant, the Bedlington terrier found favor with the nobility.

Still regarding its origins, one current of thought holds that they were imported from Holland by a group of weavers in the 18th century. Among its ancestors we find the “dandie dinmont”, a dog bred by the Duke of Antrim, the otterhound and the whippet and the result was a terrier type dog with a slender body and the classic arched back typical of the greyhound. It is certain that wherever the first specimens were selected, the breed then developed in the north of England, on the borders of Scotland.

It is a dog with a very peculiar appearance, as at first sight it resembles a sheep.

The Bedlington terrier is a very affectionate, lively, always cheerful dog. It is very attached to its owner, so much so that it must defend him from everything and everyone, but it is also affectionate with other family members. With children, especially not very young ones, he is a tireless playmate, never aggressive or impulsive, with a sweet and gentle expression and manner.

It suffers a lot from loneliness, therefore it is not suitable for people who are outside all day long, as it is not suitable for those who are at their first experience with dogs as its training requires a minimum of experience, because it is a bit stubborn. It must be socialized and trained as soon as possible. As a terrier, it doesn’t get along well with other dogs unless it is socialized early and in a targeted manner. Its origin as a hunter always remains and this makes it sometimes considered a bit rough and it does not renounce to at least one long daily outing to run and have fun, which it needs very much. It is said that “he is so fast that he can keep up with a horse at normal speed”.

With strangers it is quite wary but never gives any sign of submission; it is quick and decisive in its intentions. It is an excellent watchdog, it adapts well to living in an apartment, but it also loves being outdoors a lot.

The Bedlington terrier is a small to medium sized dog, its height at the withers is about 40 centimeters for a weight ranging from 8 to 10 kilograms. The female is usually a little smaller. It is a graceful, agile and muscular dog and at first sight it looks very much like a lamb.  Its very particular morphological classification is defined as: wolf-bracco-graioid.

The thorax is deep and averagely wide and the croup is strongly arched. It has a long, tapered neck that rises from a pair of flat shoulders. The body is muscular, slightly longer than tall, the legs are slender and muscular, and the hind legs are longer than the front ones.  The tail is inserted low and has a medium length, is carried low and soft, and however never raised above the croup. On the whole, this dog expresses tonicity and great speed in its movements.

The skull, very narrow and roundish, is covered by a curious silky and abundant tuft of almost white color. The head as a whole is pear or wedge shaped. The truffle has wide, well-defined nostrils. Blue and blue-furred specimens must have a black truffle, while liver and sand colored specimens must have a brown one. The ears, covered with fur and falling flat on the cheeks, have a low hairline, the eyes are small, triangular and bright. The color changes based on the color of the coat.

The Bedlington terrier’s coat is very distinctive. It is very soft and thick, stands upright and is soft to the touch, has a tendency to curl especially on the head and facial area. The colors allowed by the breed standard are: blue, blue and tan, liver and sand.

Health and care of the Bedlington terrier dog breed

Generally speaking, the Bedlington terrier is a dog that is characterized by a state of good health and does not suffer from any particular problems. They are prone to some diseases, such as liver disease, which is the leading cause of death among specimens of this breed, and also problems related to the eyes, with development of diseases such as cataracts or retinal dysplasia. It has a rather long life expectancy, on average 14-16 years.

Exercise, daily and intense, in some cases, is essential to keep this dog in excellent health and to avoid accumulations of stress. He has an excellent resistance to both heat and cold, but not extreme and not for long. It is recommended to cover him in the coldest days of the year.

The Bedlington terrier has a hair that grows continuously so it must be shortened every six to eight weeks to maintain the dog’s classic appearance. It should be considered among the dogs that have no hair loss if kept well brushed and shaved where needed.

As far as alimentation is concerned, there are no particular problems; a balanced diet and a lot of movement are the only things to do, it is not subject to gaining a lot of weight and manages very well on its own.