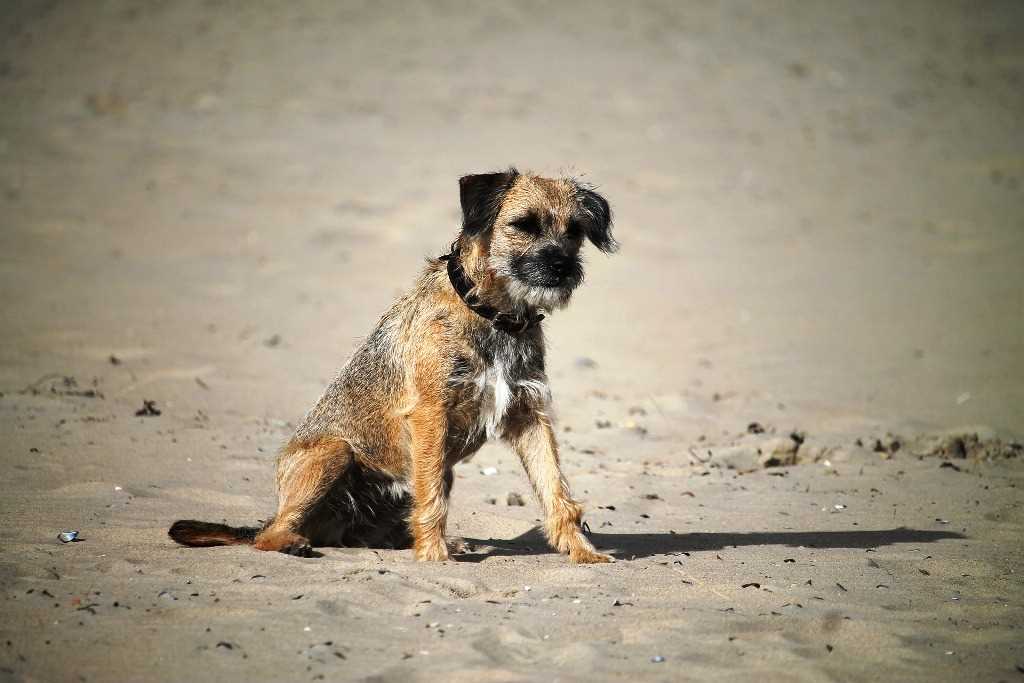 The border terrier dog breed originates from the Borders region of southern Scotland.   Small English terriers were bred in the 1800s to hunt foxes and mice, and during their history were known as reedwater terriers and coquetdale terriers, but are now known as border terriers.  They share their lineage with the Bedlington terrier and the Dandie Dinmont terrier.

Until the early 1900s, the breed had virtually disappeared, reappeared in a dog show and was not officially recognised until 1920, the same year that the border terrier club was formed. It was originally used to hunt foxes, which were a plague on local farmers. Due to their small size, these dogs were able to enter the foxes’ dens and drive them away. At the same time, however, they were also large enough to chase the hunters’ horses and fight the foxes if necessary.

When fox hunting became a sporting activity, border terriers became an integral part of this practice.

The border terrier is not a widespread breed in Europe, the most numerous being in England, in other European countries it is making its way, but it remains an uncommon dog.

The border terrier is a lively, joyful and sociable dog, but also courageous and strong. It has a great personality. It is, however, a hunting dog and this propensity makes living with cats and small animals rather difficult, as it sees them as prey. In these cases an early socialisation helps a lot.

Exceptional as a companion. It is unquestionably attached to a particular person. Very intelligent. It is possible to make it understand everything without the need to insist. It is therefore very suitable for an inexperienced owner as it is easy to educate. It is an excellent hunting dog, but also an excellent companion dog. It loves being indoors, playing with children, but needs exercise every day. So even if it fits in a flat, it should be taken outside at least 2-3 times a day.

A border terrier is capable of making itself known loud and clear to strangers. It guards the house and garden with courage and attention. In the house, being very intelligent and obedient, it does not make a mess and understands the rules on the fly. It is not suitable for people who are sedentary or have little time to spare, and it also suffers a great deal from loneliness.

The Border Terrier is a small to medium-sized dog. At the withers it measures 22 to 25 centimetres and weighs 6 to 7 kilograms. It is a very hardy breed, with a strong, hardy body and not too heavy bony limbs. The dog’s legs are long in relation to its stature, which is one of the characteristics that make it capable of chasing a horse. The gait is agile and agile.

The tail is moderately short; fairly thick at the root, tapering off.
It is inserted high, carried gaily, but not curved on the back.

The head has the typical appearance of that of the otter with a short and robust muzzle and good scissor teeth. The truffle is generally black or liver or flesh coloured. The eyes are dark with a lively and alert expression. The ears are small, V-shaped, of moderate thickness and drooping forward, adhering to the cheeks.

The coat is hard, compact and with a dense undercoat. The permissible colours for this breed are red, wheat, grey and tan, blue and tan.

Health and care of the border terrier dog breed

From a health point of view, this robust dog breed has no known problems. With its slender build and plenty of exercise, the border terrier can reach 15 years of age. It fears the cold, which is why it is advisable to protect it as much as possible during the cold season, even if it is kept indoors.

The border terrier’s coat is hardly prone to shedding if it is sheared and groomed regularly.

Feeding the border terrier is generally not a problem. The important thing is to use good quality food in the right proportions.