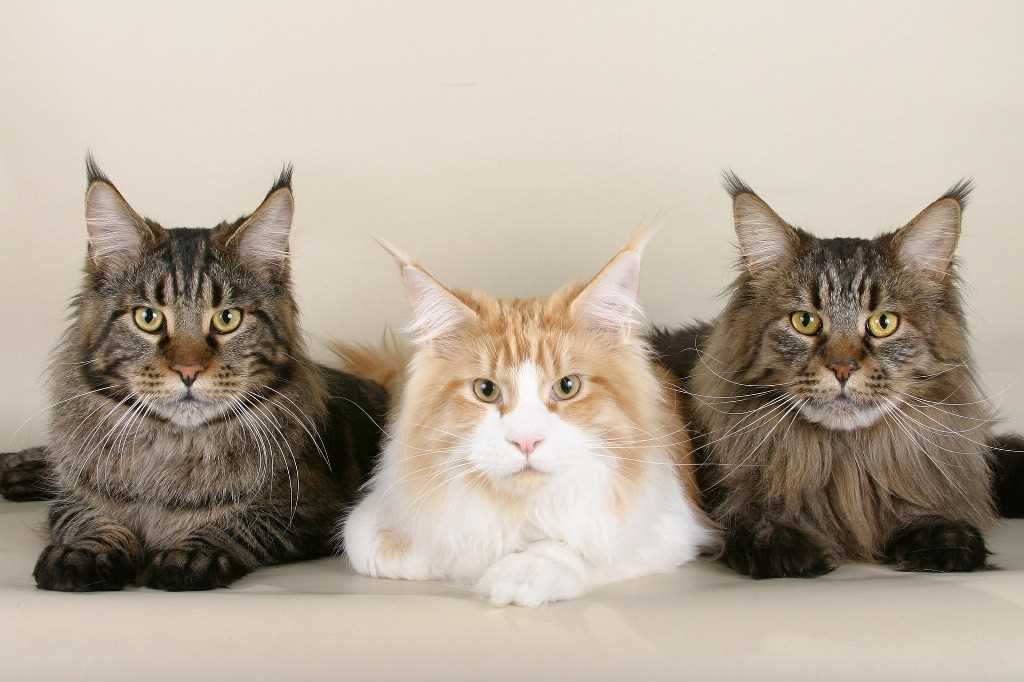 This is the breed of cats with the largest size. In fact, males of the species can exceed 10 kilograms, while females reach around 7 kilograms.

Their origin is not very clear and there are many legends concerning the origin of this breed. Very picturesque legends, but without any objective feedback. The most widespread is that because of the large, hairy ears and coarse, ringed tail, the Maine Coon was the result of a cross between a lynx and a washing bear. Another theory is that the breed is descended from some long-haired French cats secretly sent to Maine by Marie Antoinette, shortly before her attempt to escape france, before her guillotine conviction. Another, for their resemblance to the Norwegian Forest Cat, which were brought by Viking ships that touched the American coast about 1000 years ago. The most accredited theory, however, is that this breed is the result of shrewd pairings between the American common cat, the American Shorthair and long-haired cats type Angora and some natural selection that favored a large cat with a semi-long and thick hair, two adaptations to the cold and humid climate of Maine.

The Maine Coon was one of the first breeds to be recognized by the Governing Council of the Cat, which in the early 19th century was the largest organization to record cat pedigrees and became one of the most prestigious breeds. With the gradual appearance in the country of more exotic breeds such as Persians and angora cats, this breed is almost forgotten, even in the 50s it is said to have been declared extinct. Fortunately it was only an exaggeration and this breed has now fully regained its glory, and is recognized as an official breed in 1967 by the Canadian Cat Association.

Today’s Maine Coons are very different from the first bred subjects; they are massive, massive, huge in size, some males weigh up to 14 kilograms, although their average weight is about 7 kilograms. It has a long and well-proportioned body in all its parts, muscular and with a wide chest. It has high legs with hair-rich fingers so as not to sink into the snow and even the ears despite being large and well open are equipped with abundant tufts of hair. The coat has a characteristic natural fat that protects it from atmospheric adversity. The eyes are large, expressive and oval-shaped and it is not uncommon to find specimens with eyes of different colors. The maine Coon’s hair is long, thick and a little messy, shorter on the shoulders, longer on the stomach and on the front of the neck, the hair is soft and silky. The fur of this breed exists in all varieties of color with or without white, that is, black, cream, blue and red.

The Maine Coon has a very quiet character, very tender and playful. He is sociable and friendly, even if it takes a little bit with strangers before he becomes affectionate. With the family he establishes a very close relationship, he likes to follow the various components of the family unit in each of their activities. He is very curious and playful. It is therefore suitable for children, as it is very difficult for scratches or puffs. He agrees with other cats and even dogs. It’s an extremely smart cat and it’s one of the few feline breeds you can teach games like bringing back a ball. He appreciates a bit of freedom, he’s a great hunter, so if you have a garden he’ll climb trees in search of some prey. In times of family relaxation he loves to snuggle up next to a family member and even jump into his lap. The Maine Coons communicate as well as with body language and with the classic meows and melted, even with trill-like verses that are actually a little strange coming from such an imposing cat.

The Maine Coon is a particularly robust, massive and muscular cat and does not require much care. However, the large amount of hair requires brushing at least once a week and twice during the wetsuit period. A bath every two, three months is also suitable for the thick and long hair. It is a cat that grows a lot and for a long time so it needs a varied diet that allows it to supplement its natural diet with supplements. He does not tend to become obese, but it must be the master’s care to properly manage his needs. Although it is a very robust animal it can inherit some health problems that can be worrying: among them, hypertrophic cardiomyopathy, hip dysplasia and spinal muscular atrophy. Cardiomyopathy is the most common form of vascular disease in cats and causes thickening of the heart muscle. Hip dysplasia is a congenital defect of the hip joint. In mild cases it can cause none or little pain and in more severe cases can lead to lameness. have difficulty moving and therefore move slowly. Spinal muscular atrophy is a disease that affects nerve cells that transmit motion signals. This disease involves muscle weakening, but the affected subjects can live a normal life as the disease does not cause them any pain even if they walk swinging the back of the body. These diseases are treated with special attention by breeders of this breed. For this reason, the breeders are tested for genetic testing and monitored periodically by echocardiographic examinations. Some feline associations demand the updated documentation of these tests and examinations for the issuance of the pedigree of kittens. Careful breeders also subject their cats to other tests, such as kidney ultrasounds and genetic tests such as SMA or PKdef. It will be in the future owner’s interest to refer to serious and competent breeders in order to minimise the risks of facing these health problems.