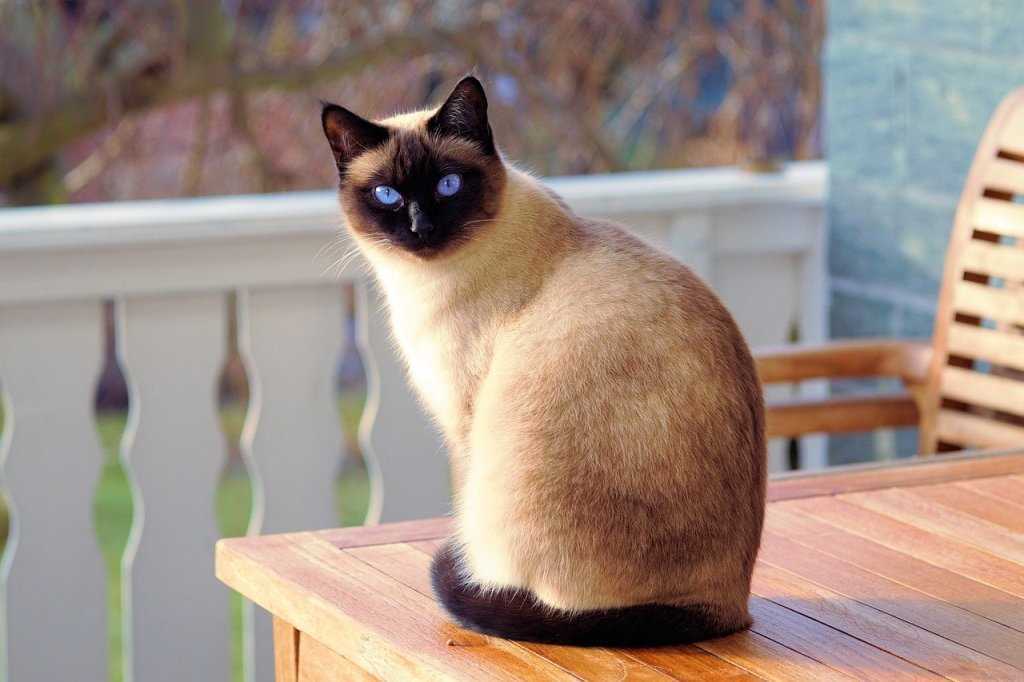 The Siamese breed is one of the best known breeds of cats.  It is said to come from Siam (present-day Thailand), and in Europe and the Americas it arrived rather late. A pair of Siamese cats was given by the Emperor of Siam to the English consul in 1880, but its history is very long, it was jealously guarded as a companion in royal families and religious leaders for generations and served as guardians for precious objects and documents kept in Buddhist temples. There is even a legend about the temple of the God of Siam. The legend speaks of these cats that were used in the temple as guardians of the king. They were able to climb the high columns surrounding the royal throne and if anyone dared to threaten the king, they would jump down from the columns and scratch the unfortunate one. Other legends are about the appearance of this feline. In one it is said that one of these cats was in charge of watching over a valuable vase and to do so the animal twisted its tail around the vase and stared at it with such intensity that its eyes were crossed forever.  In another one is told about a cat that was in charge of watching over precious rings, to do so the cat kept the rings on its tail, creating a crease so that the rings did not slip away. It was a breed however not very well known until the Second World War, after that it quickly became the most widespread in terms of registrations. Initially it did not have a great luck, at the first feline exhibition where it appeared it was described by a journalist as a nightmare cat, instead it quickly became popular among the fans in Great Britain, in spite of its crossed eyes and its fold in the tail.

Character of the Siamese cat

It is a very exuberant and affectionate cat, and from the character point of view it is the cat that most resembles the dog. It can in fact almost always be trained and accustomed to go out on a leash. It has a very outgoing and lively character, very communicative and with a particular meowing that makes it stand out from other cats, with which it communicates its desires and ideas. It ‘a cat suitable for families with children already old, needs attention and that you play a little bit daily with him. It is not a cat suitable for people who want peace of mind. He is fond of all the members of the family, but he chooses one in particular and establishes a very possessive relationship with that person. It is not a cat that loves to be alone, nor in the company of other animals, nor does it love strangers who can enter the house, in fact it is rather distrustful of those who do not know well. Not everyone is suitable to live with a Siamese, given his “character”, is not the cat suitable for nervous or impatient people. If he does not have available scratchers or games that can stimulate his curiosity when he is alone for a long time, sometimes he tends to make trouble trying to discharge the frustration caused by lack of social interaction.

It is a very beautiful cat, has a slender and supple body, agile and very elegant. It is of medium size, the male weighs from 3 to 5 kilograms while the female does not exceed 3 kilograms.  The head is of elongated triangular shape with ears that represent a long extension, being large and pointed.  The snout is thin and wedge-shaped. The eyes are almond-shaped and deep and vivid blue. The legs are long and thin, the tip of the legs is thin, delicate and small. The tail is also very long and thin. The hair is short and does not tend to lose much of it, even during moulting periods.  It is very thin, short, shiny and adherent to the body.  The characteristic of the hair of this cat is that the color of the fur on the head, tail and feet is darker than that of the fur on the body. While generally the color of the body goes from white to cream, there are many points of darker color for the muzzle and the ends, ranging from red to blue to chocolate.

The Siamese cat does not require special care. A weekly brush with a cloth or a buckskin is enough to give it the shine that distinguishes it. Nutrition and diet are basic for this breed, as these cats absolutely must not get fat, given the long and thin legs they have and are not suitable to support a heavy body. It eats practically everything, but the diet must be dosed, as it is endowed with a good appetite. Visits to the vet must be frequent as it is a little bit health-conscious. They may occasionally suffer from cross-eye problems, otitis and kidney stones.