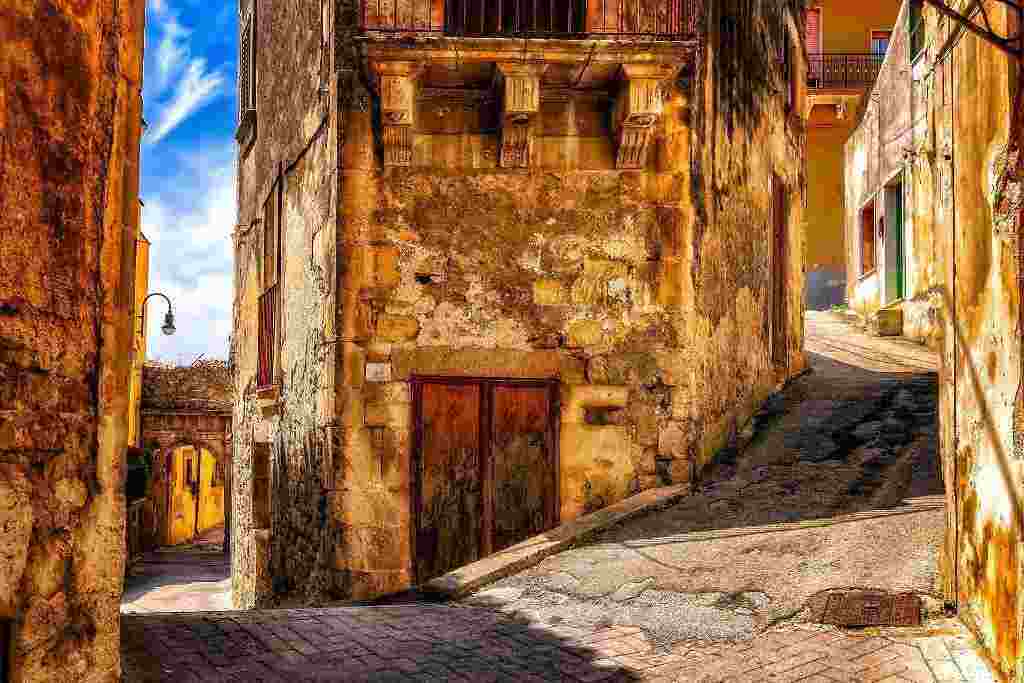 Sicilian cuisine undergoes the cultures of all those who over the centuries have dominated it, starting with the Greeks, Phoenicians, Romans, Normans, Spaniards, just to indicate some of them, but in practice being the island in the middle of the Mediterranean and being its lands very rich is influenced by many cultures. From the Greeks imported olives, from the Byzantines cinnamon and cloves, but from all they obtained some innovation that we still find in the typical recipes of the island. Being an island the fish has its importance in the diet of Sicilians, but there is no shortage of earthly dishes, vegetables and many sweets. Let’s start with the starters. The most famous is the Sicilian caponata, which should be eaten cold and can also be considered a good side dish. But there are many other recipes like stuffed olives or sea salad.

Necessary for the Sicilian caponata

Preparation of the Sicilian caponata

First put the sliced aubergines into marinate in coarse salt. That is, put in a layered bowl with a lot of coarse salt. In this way they lose water and therefore the bitter taste.

Once removed from salt wash the aubergines very well under running cold water and dry. At this point fry the slices of aubergines in plenty of olive oil. You can also use seed oil if you want to make them lighter. Once fried, pass the aubergines into the paper towel to remove the excess oil and set aside.

Wash and chop the celery ribs and cook them in boiling water for about fifteen minutes. Remove it from the water and set aside.

In a large frying pan, fry the finely chopped onions in olive oil. When they are golden add the pieces of celery, the green olives cut into small pieces and the capers that you will have first washed to remove the excess salt. At this point add the tomato paste, sugar, white wine vinegar and a glass of water. Leave to cook for about 30 minutes. At this point add the aubergines, mix very well to make them flavor and turn off the heat. The caponata is usually left to cool and stored for the next day, but it is enough to let it cool completely (so about an hour, an hour and a half) and you can serve it as a starter or as a side dish.

Necessary for olives stuffed with Mexican

Preparation of olives stuffed with Mexican

Put the bread crumbs in a bowl along with the parsley and garlic clove, finely chopped. Add the grated seasoned pecorino cheese, a pinch of chilli and drizzle with two tablespoons of olive oil, two of white wine vinegar and a couple of tablespoons of water if needed. Mix everything well and stuff the olives, which are nutless opening them only on one side, with the mixture until all the olives are finished. They should then be refrigerated for at least two hours in a closed container.

A delicious Sicilian appetizer made with crustaceans, seafood, octopus and vegetables.

Clean the octopus and squid and cut them into rounds and pieces. Boil them for about ten minutes and remove from the water. Clean the prawns and remove the head and shell. Cook them for a couple of minutes in boiling water. Put the mussels in a pot with the lid on the heat until the valves are open. Remove the shells and leave only the mussels. In a rather large bowl put now the pieces of octopus, squid rings, mussels and shrimp, add the parsley and garlic, finely chopped along with the carrot and celery cut into small pieces and drising with the juice of the middle lemon, salt oil and pepper. Allow the sea salad to cool at least an hour, stirring occasionally to blend all the flavors well. Serve cold.

There are many, both land and sea, that mixed. Let’s start with the pasta with the sardines. It is a first dish that traditionally prepares in Sicily for St. Joseph, on March 19th. It was once prepared in March and September, periods when wild fennels are found. Today they are found all year round even if cultivated and do not have the intense scent of the wild. Let’s talk about Pasta to Norma or Sicilian.

Necessary for pasta with sardines

First, take the wild fennel already cleaned and coarsely chopped and boil them in plenty of salted water for about 30 minutes.

Remove them freshly cooked, but do not throw the cooking water that will be used for the preparation of the recipe.

Finely chop the onion and fry in plenty of olive oil until golden brown. Now add the chopped anchovy fillets, the raisins and the pine nuts. In two or three tablespoons of water, dissolve the saffron bag and add it to the pan. Put the tomato paste mix and add the wild fennel. Season for a couple of minutes and put the sardines into small pieces. Cook for about 30 minutes, adding a couple of glasses of fennel cooking water, or how much it takes to keep the mixture from being too dry.

Always in the usual cooking water of the wild fennel as soon as it boils put the bucatini and let them cook until they are al dente.

Season the pasta with the mixture and serve warm.

Pasta with Norma or Sicilian

This pasta dressing is said to have been made in honor of Norma, an opera by the Italian composer Vincenzo Bellini. I think it is the first Sicilian dish best known in the world because it combines all the flavors and smells of classic Mediterranean cuisine.

Necessary for pasta to Norma or Sicilian

Preparation of pasta to Norma or Sicilian

First prepare the aubergines that should be cut into slices of about one centimeter and put in a drain in layers with the coarse salt and let marinate at least 30 minutes.

Prepare the sauce in the meantime. Finely chop the onion and put it in a pan with olive oil until golden brown along with the crushed garlic clove (which should be removed before seasoning the dough).

Add the peeled tomatoes into small pieces and cook the sauce for about 20 minutes. Pass the sauce with a vegetable pass and put back on the heat to make it thicken well. Put a few basil leaves that will make the sauce more fragrant.

In a frying pan with plenty of seed oil, fry the aubergines that are removed from salt, washed well and dried, cut into small pieces, until golden brown.

Meanwhile, cook the pasta in plenty of salted water and once cooked season with the tomato sauce and the chopped eggplant. Finish with a generous sprinkling of grated salted ricotta. Serve warm.

Now let’s move on to the world’s best-known Sicilian recipe, arancini. I’m not a first course, I’m not a second. Many consider it a unique dish for its components, which are very substantial. They are generally prepared in two ways, with sauce or with cooked ham and cheese.

Preparation of Sicilian arancini with ragù

It is advisable to prepare both rice and sauce several hours before serving the arancini, as both the sauce and the rice must be completely cold before preparing and frying them.

Then we start by cooking the rice in plenty of salted water, once cooked and drained add the butter and saffron that should be dissolved in a little water. Mix well and set aside to cool completely.

Now let’s get the sauce ready.

In a frying pan fry in olive oil, the carrot, onion and celery, finely chopped. When the vegetables are golden add the minced meat and let it cook for about ten minutes. Add the white wine and allow to evaporate completely. At this point combine the cloves, bay leaf, tomato purée and peas and with a lid cook for about an hour, stirring occasionally, adding a little water if needed. Season with salt and pepper and leave the sauce to cool completely. Before using the sauce remove the cloves and bay leaf and add the grated caciocavallo.

Now take the rice and form a kind of hollow in the palm of your hand. Put a generous spoonful of ragout in this inveg and close with more rice to form a ball. Form so many balls until the ingredients are finished.

Prepare a kind of batter with flour and a few tablespoons of water. Pass the arancino in to the batter throughout its surface. Finally pass it into the breadcrumbs. Once prepared all fry in plenty of very hot peanut oil until golden from all sides. Pass the arancini into paper towels and serve. They are delicious both hot and cold.