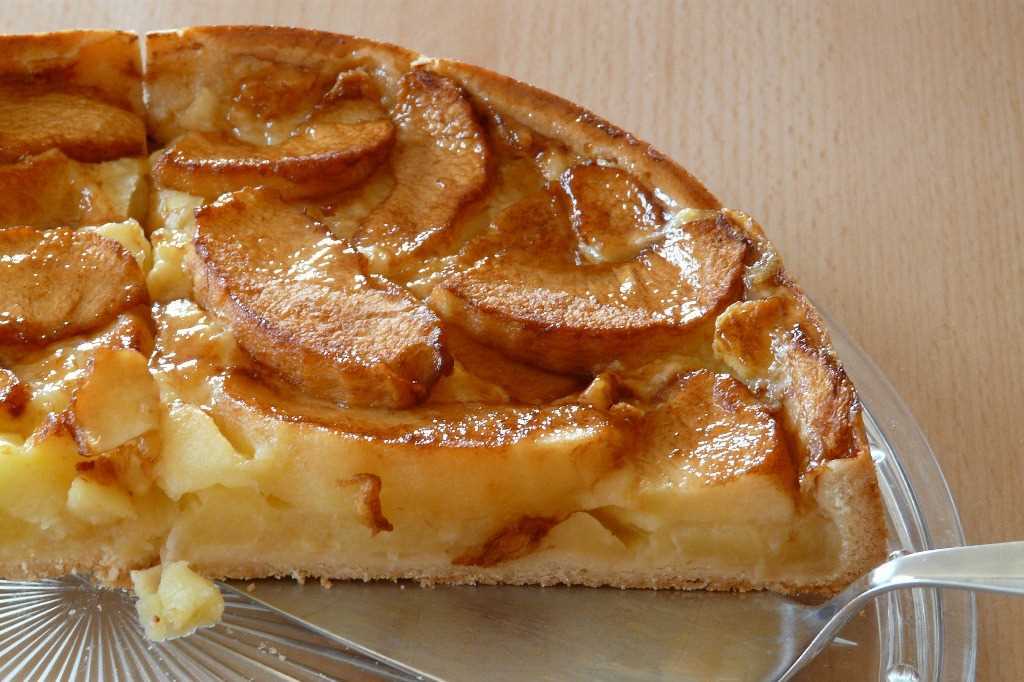 Apple pie is one of the sweets that appeal to both adults and children. It is yummy for breakfast with a cup of milk or chocolate. For the children’s snack, for an afterlunch or an after-dinner, but also for a snack at all hours.

In the meantime I put here the recipe that I like the most, but there are many recipes for this dessert, including the tart or the classic strudel. It is cooked in many parts of the world each with its own variants, but all of them always very tasty.

I prefer this version of apple pie because instead of butter you put in mascarpone, so it gets lighter.

These doses are for a cake tin of 28 cm.

peel and cut into small pieces the apples

Whisk beat the eggs with the sugar and pinch of salt until it becomes a frothy mixture. In a bowl now put the mascarpone and work with a wooden ladle to make it softer by combining every now and then a few tablespoons of the egg and sugar mixture. Slowly combine the whole mixture, blending well. At this point slowly combine the flour and baking powder, stirring well to avoid lumps. Now put in the mixture the pieces of apple that you have prepared before. Snallow and flour a 28 cm cake tin, put the mixture in the cake tin leveling well. Meanwhile, heat the static oven to about 180 degrees. The cooking time for the cake will be one hour. It is very much for a cake but it must be cooked very well especially inside where the apples are, so to prevent the crust of the cake from blackening too much and burning, given the most cooking time, after 35/40 minutes placed on top of the cake a sheet of aluminum foil. This will allow you to cook our dessert perfectly without burning.

First prepare the apples, which should be made to rest a little. Then peel and cut into thin strips that are then put in the lemon juice and left for about an hour,

In this version the eggs should be divided between yolk and egg white. The egg yolks are whisked with sugar, while the egg whites are whipped in snow. Prepare the two compounds with a wooden spoon blend gently by turning the mixture from the bottom up to prevent the eggs from dismounting. At this point, the flour, baking powder, butter (which we will have worked previously to make it as shredded as possible) the zest of half a grated lemon and milk, stirring gently until the whole thing is mixed.

Pour the mixture into a 26 cm cake tin buttered and floured and place over the surface the apple slices, distributing in radial, making sure that they do not go too deep in the dough, Cook about 30 minutes at 180 degrees.

A cooking tip that also applies to any other type of cake. Try never to open the oven in the first 20 minutes of cooking. You will avoid that your dessert gets too down and then turns out not to cook well inside.

Another great classic, the tart. This is also a very easy dessert to make and it sure effect. It’s those sweets that make us rediscover the flavors of yeslit, and think back to our grandmothers who often made them.

first you have to make the puff pastry that will be the base of our cake. Then we will make a dough with flour, sugar, softened butter, the two egg yolks and the vanillin. Working with your hands on a pavement form a dough quite firm. This should be kept in the fridge for at least an hour. After this time with a rolling pin smooth the dough until you get a round pastry about one centimeter high, which you will place inside an already buttered and floured cake tin, removing from the edge the excess dough. Now put the jam on the surface and distribute it evenly.

Put the slices of apples above the jam that you had previously prepared by distributing them, dust them with icing sugar and add the juice of a lemon. If you have puff pastry, form strips that you will put on the surface to form a rather large grid. Preheat the oven to 200 degrees and bake the already hot oven tart for 15 minutes. Let the tart warm up a little before serving, which will prevent it from crumbling when you cut it into slices.

This version is even softer and gentler.

Beat the eggs with the sugar and a pinch of salt. It slowly incorporates the flour, then the cottage cheese and milk, mixing everything. Now one of the two apples cut it into rather small pieces and go to add to the mixture together with the sachet of baking powder, mixing everything well.

Flour and flour a cake tin and pour the mixture into it. The other apple will cut it into strips that should be placed on the surface of the cake. Sprinkle with a pinch of cinnamon and bake in a pre-heat oven at 180 degrees for 50 minutes. Let it cool down and serve it.

This dessert is typical of Trentino South Tyrol, stuffed with apples, raisins, pine nuts all flavored with cinnamon. This is also found in different versions.

For pasta you need:

For the filling you need:

First you prepare the strudel paste. Mix the flour with the egg, pinch the salt and sprinkle with white vinegar. At this point combine the milk and melted butter and egg, work by hand until you get a firm dough, which is put in a bowl, covered and put in the refrigerator for about an hour. Now let’s get the filling ready.

Take now the dough we had prepared and with a rolling pin we try to make a very thin pastry, then brush the pastry with melted butter and breaded bread. Now add the mixture with the apples and spread evenly on the pastry. Start rolling the pastry with stuffing on itself until it wraps around. Before putting it in the oven, which in the meantime you have warmed to 180 degrees, brush our strudel with milk and a beaten egg yolk.

Cook for about 40 minutes and cool before serving.

This recipe is also very light and easy to prepare.

let’s prepare the apples in the meantime. Half the cut into small pieces and the other half into thin strips and will serve as a seal. Both the pieces and the strips should be put in a container with the juice of a lemon and let stand in the fridge while you prepare the cake dough.

Break the eggs and whisk with a whisk together with the sugar, add the warm butter and yoghurt, then also the flour a little at a time and the sachet of baking powder. Now add the apples to the mixture, cut into small pieces and mix well.

In a cake tin of 26 cm, buttered and floured put the mixture leveling it well and on top go to garnish with the slices of apples that you have already prepared. Bake at 180 degrees for 45 minutes. Let the cake cool in its mould before putting it on a serving plate and serving it.

This is the quintessential American cake, the one that gets dark on the window sill and that we’ve seen in so many Walt Disney cartoons or comics. It is a real American institution, loved by all. I propose here the original recipe, which has had over time and in various places many variations, although of little regard.

For pasta you need:

For the filling you need:

you start kneading the flour with sugar, combine the butter into flakes and work everything with your hands, slowly adding a little water until it forms a ball with a soda consistency. Put the mixture in a container, cover it with cling film and refrigerate for at least half an hour.

Now let’s make the filling of our cake.

Peel the apples and cut them into thin slices that go into a container with lemon juice. Now combine the grated lemon zest, cornflour, sugar and a pinch of cloves powder, cinnamon and nutmeg, stirring well so that the apple slices take the various flavors of the spices.

Now let’s take the pasta loaf that we had put in the fridge let’s work for a few minutes with our hands and divide it into two parts. With a rolling pin we form with the first half a disc about 30 centimeters in diameter that we will place in a cake tin of diameter of 26 cm making the dough stick even to the edges. Now let’s put the filling that we had prepared and place on top of the whole other disc of dough to close, trying to match and superimpose the flaps of the two sheets. Brush the surface with a beaten egg, make a few incisions on the top paste and distribute a little sugar on the surface.

Bake in the oven that you have already brought to 180 degrees for 20 minutes, after which brush the surface of the cake again with a little milk and cook it for another 10 minutes. Serve lukewarm.