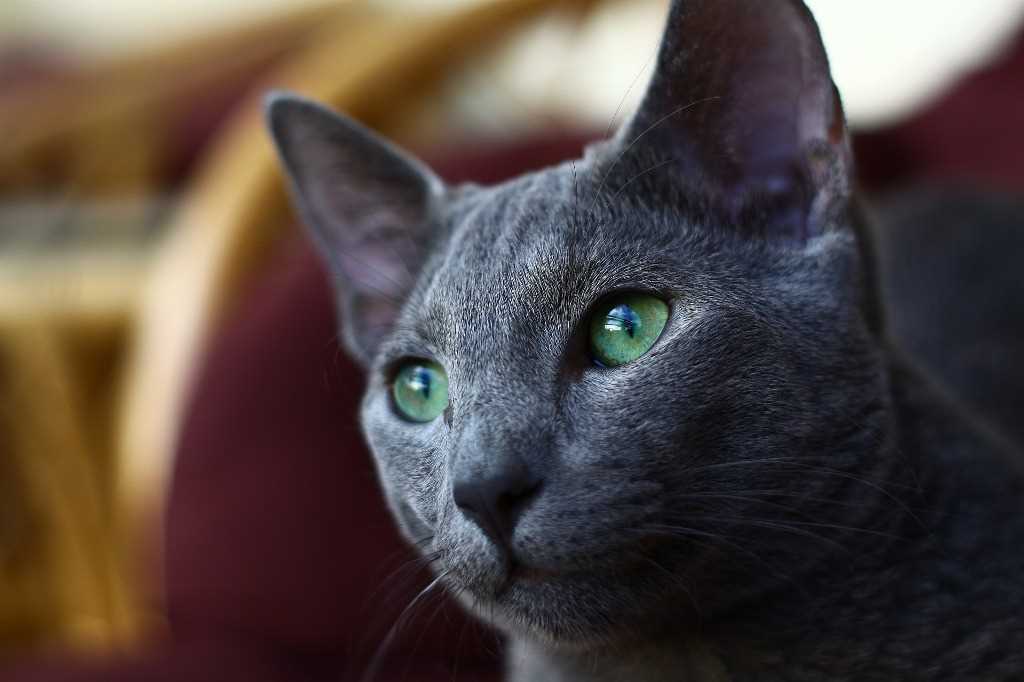 The origins of the Russian Blue Cat are not very clear, in fact it appeared at the beginning of 1900 in England.  It is said that it was brought to England by merchants from northern Russia and precisely from the city of Arkhangelsk (Archangel). Sailors embarked these cats to protect food supplies from mice on ships. In Russia in ancient times these cats were bred for their fur, similar to that of an otter, and with this fur were made colbasses, coat necks and sleeves.

Other legends were also born in Russia. It is said that these cats in the court of the Tsar were put in the children’s rooms because it was said that they had the power to send away evil spirits. Their special beauty attracted the Tsar and his court, and they were called the Tsar’s Cat. Later he also attracted the English court.

During the World Wars, especially in the second as many other breeds of cats risked extinction and it was the English breeders who prevented their disappearance in those dark years.

Character of the Blue Cat of Russia

The Blue Cat of Russia has a sweet, quiet and reserved character. It is very sensitive so it gets scared in front of sudden noises or abrupt tones of voice. You choose a human in the family and it is to him who gives unconditional love, following him in all his movements. For these cats are fine quiet environments that are not characterized by too much confusion.

It is the typical apartment cat, very little destructive, who loves comfort and is able to spend a lot of time lying in the same place without getting bored. It is not afraid of loneliness, but if it stays alone for most of the day it would be good if it had a companion of its breed or even a four-legged friend to help it fight loneliness, but at the same time it needs a rather quiet friend.

These are cats that do not suffer from jealousies and adapt well to life with other animals as long as they are not too turbulent. They are very shy with strangers, so much so that when they come to the house, someone who doesn’t know them tends to hide. It’s a cat who likes to play a lot, so it’s fine with children as long as they are not too lively. He is very affectionate both with his human and with other family members.

He is never intrusive, on the contrary he knows when to appear and when to disappear, he is also very polite so do not risk finding surprises when you return home where he was alone for several hours. The Blue Cat of Russia is the classic apartment cat even if it does not disdain the open air and is not too afraid of the cold in honor of its origin, but it loves the comfortable, soft and warm.

Appearance of the Blue Cat of Russia

The Blue Cat of Russia is of medium size, has good bones and the body is solid and muscular. In the bearing, however, is agile, graceful and very elegant. The weight of a male specimen goes from 3 to 5 kilograms while a female from 2 to 3 kilograms.

The head is wide and has the shape of a beveled triangle with full cheeks, the ears are pointed and rather large, the eyes are almond shaped, well spaced from each other and intense green color very expressive. the chin is strong with the corners of the mouth turned upwards, so it always gives the impression of smiling.

But it is the hair the strong point of this cat. The coat is short, dense, with plenty of undercoat. To the touch is silky and soft. The color is blue, or more precisely a blue-grey rather dark and uniform with slight silvery reflections.

The blue of Russia has another important peculiarity. Its hair is considered hypoallergenic and is well tolerated even by people who suffer from allergy to cat hair.

Care and health of the Russian Blue Cat

It is a cat that has no health problems as it tends not to have any genetic problems and is not prone to disease. It has a rather long life expectancy ranging from 18 to 20 years, but several specimens have lived up to 25 years.

It loses a small amount of hair during the moulting and for this reason in that period it should be brushed every day, while in the remaining period is enough a couple of times a week.

It has a tendency to gain weight and for this reason it is necessary to keep under control the amount of food to give it daily.

For the rest the treatments are those necessary for all cats, so vaccinations, cleaning of the ears, and cutting of the nails.