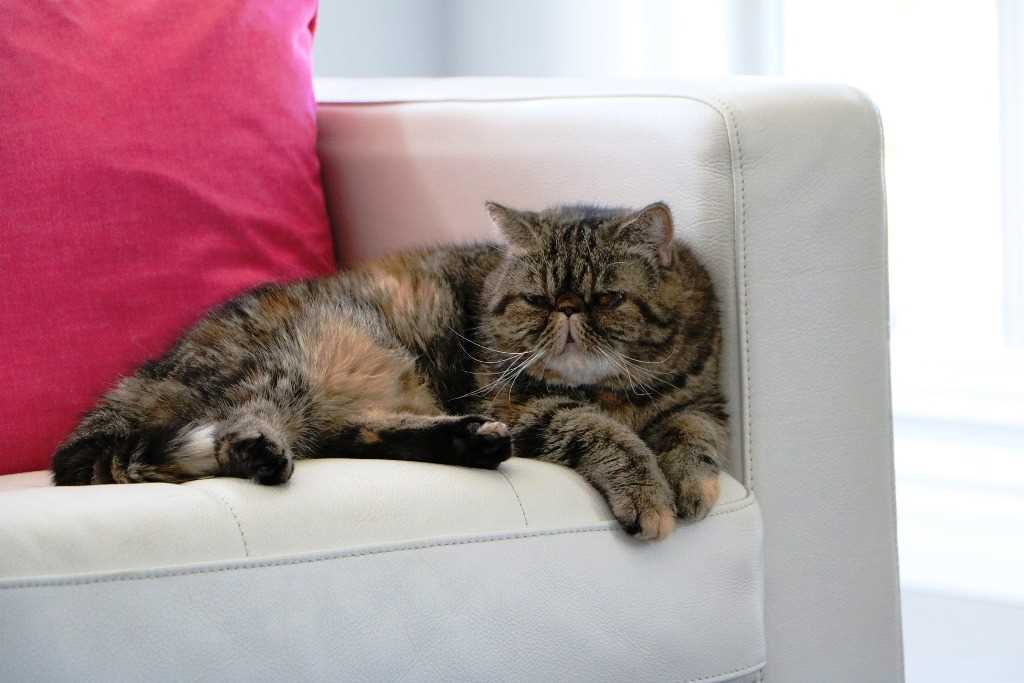 The Exotic Shorthair cat is a rather young breed. It has been created by man by crossing a Persian with a British Shorthair and the aim is to create a cat very similar to the Persian but with short hair, which is much less demanding as far as grooming is concerned.

And it is precisely in the United States that a selection was started in the fifties to create a short-haired Persian cat. As the kittens resulting from this selection, apart from the short hair, were also very sociable and affectionate, many Persian breeders started to breed this new breed, which was called Exotic Shorthair.

This cat is also jokingly called “the lazy man’s Persian”. They do not need a lot of attention when it comes to their coat and are very loungy cats, although playing is an important part of their day.

Character of the Exotic Shorthair Cat

The Exotic Shorthair cat has a fairly complex personality. It is quite independent in nature, but very attached to people. As already mentioned, it is lazy and therefore loves to spend hours sleeping on a sofa or on its human’s lap. Do you know the cat Garfield from the famous comic strip? Garfield is a fat, lazy and opportunistic cat. His main occupations are lounging in front of the TV, eating a lot and playing with a teddy bear.

I think it was the Exotic Shorthair that suggested Garfield, although in truth our kitty is not exactly like that. He likes to take an active part in family life and the activities carried out within the household from which he never backs down. Strangely enough, it is the males of the species who are characterised by a more developed sensitivity than the female, who is considered a little more aloof.

It is very sociable, loves both adults and children and is very patient, so much so that it is often chosen for pet-therapy programmes, as it is very easy to educate and manage. It does not get on very well with other domestic animals, so it is a good idea to try and modify this natural predisposition through an early form of socialisation.  It is not afraid of strangers, so much so that it is best to keep this kitten constantly at home because it trusts everyone.

It seeks and encourages contact with its chosen human with meows and becomes his shadow, but at the same time is never very intrusive even though it likes to be cuddled and admired.

Appearance of the Exotic Shorthair Cat

As soon as you see it, you think of a placid and sly cat, rather robust and well-rounded. In fact, its build is stocky and muscular, with short legs and a strong structure.  The neck is massive and short and the tail is not very long and thick.

The head is rather massive but softened by an evident roundness. The nose is characteristic as in the Persians, that is flattened and short.

The eyes are big and a little protruding; most of the subjects have orange or copper eyes, the white ones may have also blue or uneven ones, that is of two different colours.  The ears are small, have a rounded tip and are well spaced out.

The coat of the Exotic Shorthair is short, but very thick and soft. Under its thick fur, this cat has a thick undercoat which does not allow the fur to adhere to the body, giving it its characteristic “plush” look.  The colour of the fur can be two-coloured, shaded, smoked, striped tabby or colourpoint.

The Exotic is a medium-sized cat, the male can reach 7-8 kilograms.

Care and health of the Exotic Shorthair cat

This cat has a life expectancy of 13 to 15 years. As far as health is concerned, particular attention must be paid to the care of its coat, as it may suffer from excessive shedding as a result of skin disorders such as oily seborrhoea. Another point that requires attention is the eyes, as they are oblique and protruding and tend to tear frequently, so they should be cleaned almost daily with a gauze soaked in warm water. It would also be a good idea to get them used to bathing from an early age, at least 3 or 4 times a year.

As far as the hair is concerned, it is sufficient to brush it a couple of times a week to remove the dead hair. A little more during the moulting period.

Finally, as far as food is concerned, given their sedentary lifestyle, they tend to eat more than they need and therefore develop obesity problems.

The village idiot, a story with a moral