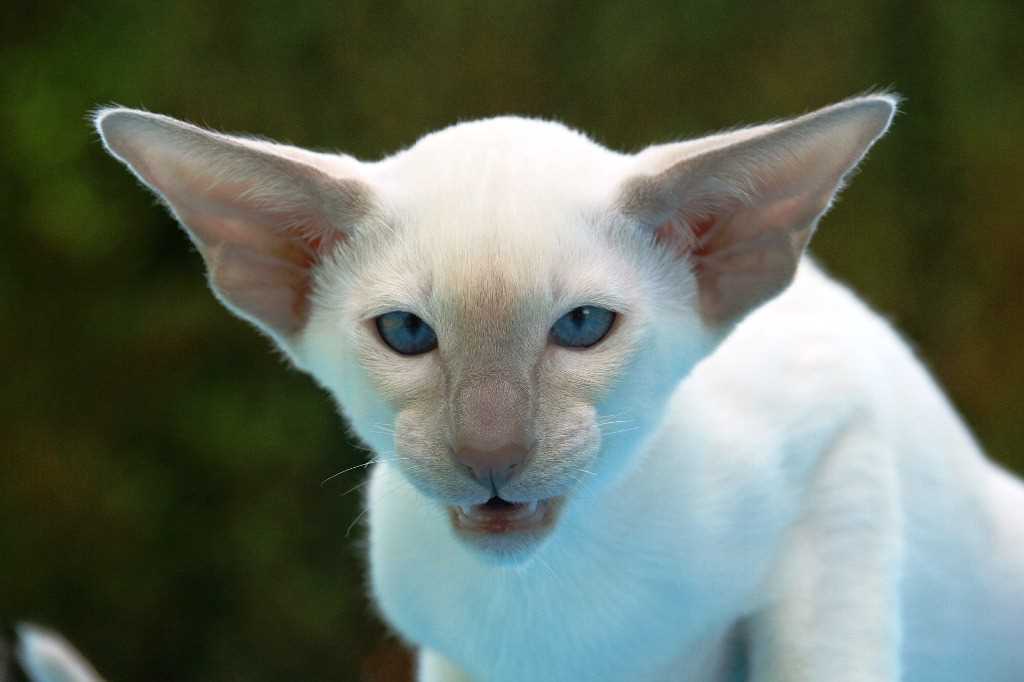 The Foreign White cat is basically the all-white, blue-eyed Siamese. They are very similar both in physique and character and are therefore sometimes mistaken, but there is a substantial difference that distinguishes them. The Siamese can have many colours but its extremities are always darker while the Foreign White is always one colour with no variations in any part of the body. It has another characteristic that makes it appreciated; very often white cats with blue eyes are born deaf, while the Foreign does not carry the deafness gene.

It is said that this cat originally came to Britain from Thailand, where it was imported together with the Siamese, which initially overshadowed the Foreign so that few were bred. More recently, in the second half of the last century, some American breeders decided to create a breeding programme for this cat, which was quite successful. This breed, however, is still very rare and there are not many breeders, which is a pity because this cat, apart from being very beautiful, has the characteristic of becoming more attached to its owner than to its home, unlike many other cats.

Character of the Foreign White Cat

This is the ideal cat for elderly people or for those who live alone but spend a lot of time at home, as the Foreign White suffers a lot from loneliness. It becomes almost morbidly attached to its owner as it recognises him as the one who looks after its needs and gives it attention. Very affectionate, sociable and sweet. He would also be ideal for a family with children as he likes to play and is very patient.

With strangers he is rather reserved and not at all willing to be manipulated by anyone other than his owner. He is very intelligent and knows how to get along with humans and even with his own kind. He has a very strong need to receive affection and equally strong need to give it and often uses his voice to demand attention. If something doesn’t feel right he has a wide range of vocalisations to make his needs known.

Appearance of the Foreign White cat

The Foreign White is a medium-sized cat with a build very similar to that of the Siamese. Its body is long, very muscular and fine, slender and elegant.  It has a long neck, long and slender legs and a very thin and long tail.

The head is wedge-shaped with hollow cheeks and rounded corners, the nose long and thin. The ears are very large in relation to the head and well spaced, placed diagonally on the sides of the head. The eyes are very beautiful and expressive, almond-shaped, slightly oblique and of a very intense blue, without shading.

Finally, the coat is its main characteristic, snow-white without spots or shades of colour. The coat is short and silky with almost no undercoat.

Care and health of the Foreign White cat

Basically, the Foreign White cat enjoys excellent health and is not predisposed to genetic diseases. It has a life expectancy of 16 to 19 years.  It is, however, prone to psychogenic alopecia, and this predisposition manifests itself both allergenically and through stress. Alopecia is the loss of hair mainly due to the fact that the cat licks itself compulsively in specific parts of the body and therefore parts of the body will be found with little or no hair.  Especially for this breed, loneliness is a strong reason for stress, and is often the cause of this malaise.  But it is not only stress that is the reason for the onset of this pathology, it can also result from skin diseases or vitamin deficiencies.

As far as diet is concerned, there are no particular recommendations. A balanced and well-cared-for diet, varying between dry and wet food and choosing products that allow the feline’s bones and muscles to develop and remain healthy.

As far as grooming is concerned, it does not need much attention, especially as it is a cat that values its personal hygiene. It is enough to brush once a week to keep its coat soft and shiny.

The village idiot, a story with a moral