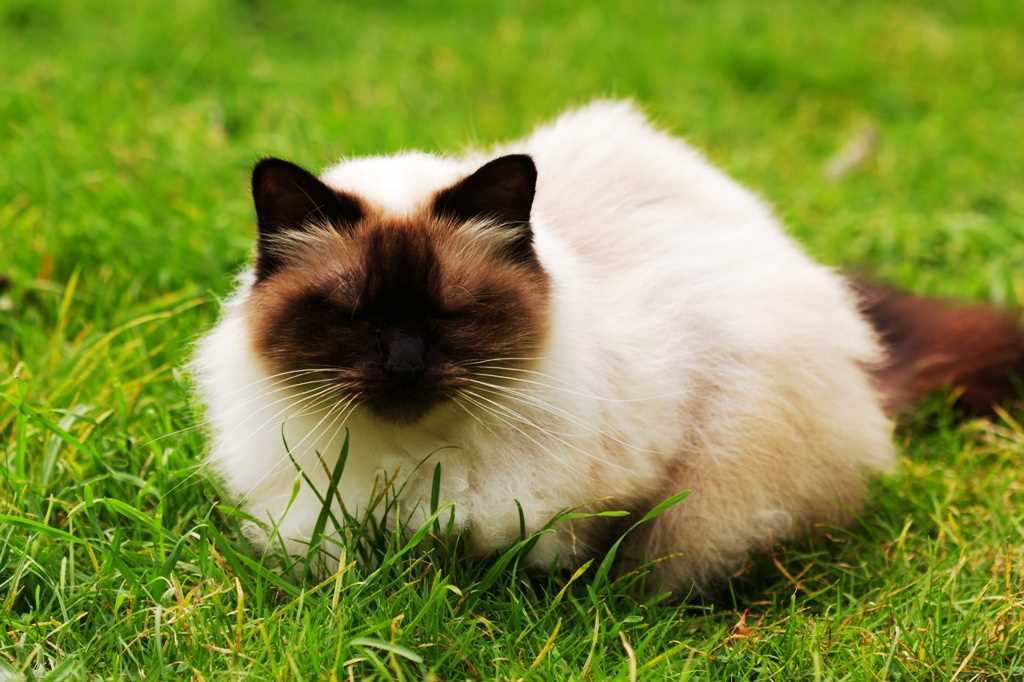 The Himalayan Cat breed was created by man, in fact it is a cross between the Persian cat, from which it took the physical characteristics, and the Siamese cat, from which it took the physiognomy that characterizes it. It is not native of the Himalayas as its name tends to suggest, but rather its origins are Swedish from the Swedish geneticist Mr. Tjbbes.    His name, Himalayan Cat comes from the similarity of the color of the coat with the Himalayan rabbit.

Its history is unique; the Swedish geneticist Tjbbes began to cross Siamese cats with long haired cats, working on the colorpoint gene he identified. But the real breed was born around the 50s when the American Marguerita Goforth managed to produce the long-awaited Persian colorpoint.

For some it’s a real breed, for others it’s a sub-breed of Persian with the exception of blue eyes and colorpoint coloration, but it’s still a very appreciated breed both in Europe and in the United States.

Character of the Himalayan Cat

The Himalayan Cat took a bit from both his ancestors; from the Persian he took the quiet character, from the Siamese he took the playful and sociable one. He likes to play a lot, but he is not intrusive. He loves to be in company and is also a great talker, his voice, typical of the Siamese is lively but pleasant and makes you hear it often in accompaniment of purring.

He loves to be the center of attention and be with humans. He cannot stand loneliness. She is capable of spending hours and hours on her human’s knees being pampered. It’s a cat that prefers the warmth of home to go out in the garden, wants a comfortable and quiet environment and does not like changes and strangers. In fact, he will run to hide when a person he does not know enters the house.

Being sociable he also lives well with other animals, and being playful he loves to be with children, as long as they are quiet and know how to behave with them.

Appearance of the Himalayan Cat

It is a medium-large cat, its physique is equal to that of the Persian, therefore round features, short legs and a muscular and robust body.  The head is roundish, the ears small and well spaced, the eyes are spectacular, of a color that goes from the most intense blue to blue and are large and round. The Himalayan cat is of two types, like the Persian, that is traditional or that has more crushed features. The tail is not very long but proportioned to the body and is very thick.

But the beauty of this cat is in its fur. It has a very thick, soft and fine hair, with a very abundant undercoat.  The base of the coat is white, only the ends are colored (ears, face, legs, tail). The gorgera is very thick. The color points of his coat are many, ranging from cream, lilac, chocolate, blue, fire brown.  The contrast between the pigmentation of the body, light, and the ends, dark, should be as sharp as possible. The clearer the contrast, the more valuable the cat.

Health and care of the Himalayan Cat

All in all the Himalayan is a robust and long-lived cat that has no particular problems of nutrition or genetic diseases. Having the snout squashed like the Persian can develop respiratory problems. Due to a tendency to tearing, his eyes must always be kept clean to avoid infections. Not doing much movement this cat tends to gain weight and therefore it is necessary to follow a well balanced diet to stay in shape.

It ‘s very important to take care of the hair of this cat, should be brushed and combed every day to prevent the formation of knots and it is also good to bathe every 15 to 20 days with a specific shampoo and conditioner. Typical of Persians, this cat tends to lose a lot of hair.