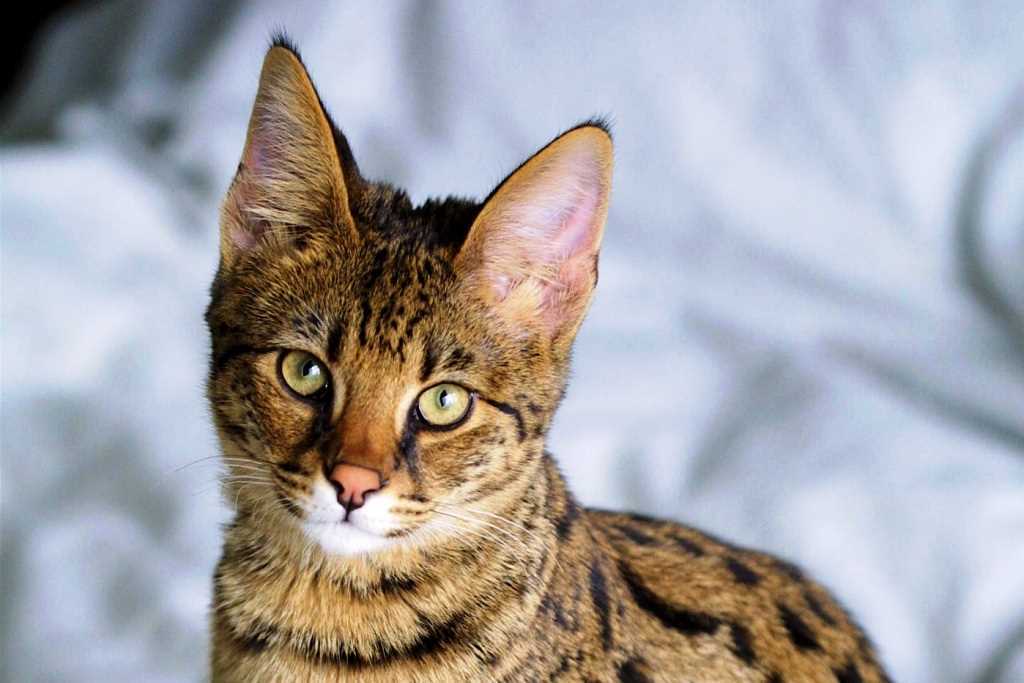 The Savannah Cat was created by man very recently. To create it a Serval, which is a wild African feline (African Leopard Cat) and a Siamese cat were crossed. It was a Bengal cat breeder, Judee Frank, who in 1986 obtained this cat from that crossing, in fact the first generation of Savannah had the features belonging to both parents, the size of the Serval and the docility of the domestic cat.

The size of these cats can vary a lot depending on which generation they belong.  Those of the litter obtained with the Serval and the domestic cat are the largest in absolute. As the generation passes they become smaller and smaller even if their size is always considerable.

The difficult mating of this breed, it is said in fact that these cats are sterile until the fifth generation, makes its price very high, it is also spoken up to 20,000 euros. In Italy there is only one breeding of this breed. It is remembered however that in Italy to hold a feline of this kind is illegal.

Character of the Savannah Cat

The Savannah, preserves wild character and physical traits of its ancestor, the Serval, for this reason it needs very large spaces to move freely and play, but it has an affectionate and cuddly character. Very lively, he is curious and dynamic. The need for exercise, play and stimulation in every sense are high in most members of this species. For this reason it is not a cat suitable for everyone because it needs a lot of attention and continuous interactions to avoid boredom and trouble at home.

It is not a cat that you can always keep in the apartment, it needs to be outdoors, even taking it outside with a bib. A safe garden would be ideal to vent its desire to jump and climb and if it has a pool or a small pool it also loves to play in the water unlike almost all cats.

It ‘s large and being playful can give problems if he plays with too much impetuosity, that’s why it is not recommended for older people and not even for children, even if used from an early age, can be a real playmate for children, obviously not too young.

With his favorite human he establishes a loving relationship, follows him from all over and solicits his games and caresses. He also loves to sleep with him, even going as far as tucking under the covers if he feels cold. He is a rather autonomous cat who can stand loneliness but only if his needs for physical activity and stimuli are perfectly satisfied. He is curious about strangers at home, but he will soon be able to conquer them with his innate charm.

Appearance of the Savannah Cat

We speak in this article about the first generation Savannah Cat, that is the direct descendant of the Serval and the Tabby.  Its tonnage is considerable, it can reach around 15 kilograms, but also heavy animals 18 kilograms and 120 centimetres long have been recorded.

The body is rectangular, long and muscular, with a strong bone structure. With its slender and slender build and the size of its ears, it has all the typical characteristics of the leopard cat. The head is slightly small compared to the body, the eyes are small, elongated and of a color ranging from green to brown, from gold to amber and are surrounded by black stripes that reach up to the mustache. It is slender and with rather long legs.  The tail is short, medium thick, tapering into a black tip.

The coat is short and particular, the outer coat is a bit rough, the undercoat is silky and dense.  The colors are different, ranging from tawny to orange with white belly and throat, to silver, but always with many small spots, oval, round and elongated, black on the legs and head.

Care and health of the Savannah Cat

The Savannah Cat has a rather long life expectancy, between 15 and 20 years depending on the genetic heritage of the serval. It is very healthy, robust and resistant and has no particular pathologies. The only problems can be sterility and low prolificness, with consequent difficulty in reproduction and selection. Often there are premature births and litters give on average one to three puppies only once a year.

Regular care of coat, eyes and ears is necessary but this cat does not require other special care. Just brush her once a week to remove excess hair and keep her shiny and soft. She doesn’t lose a lot of hair even if her undercoat is very thick.

It does not tend to gain weight, even if it has a strong appetite, as this breed is very active, but the energy, which is an innate characteristic of the Savannah breed, makes this risk very low in general terms provided, of course, that its diet is correct and its needs are always widely satisfied.