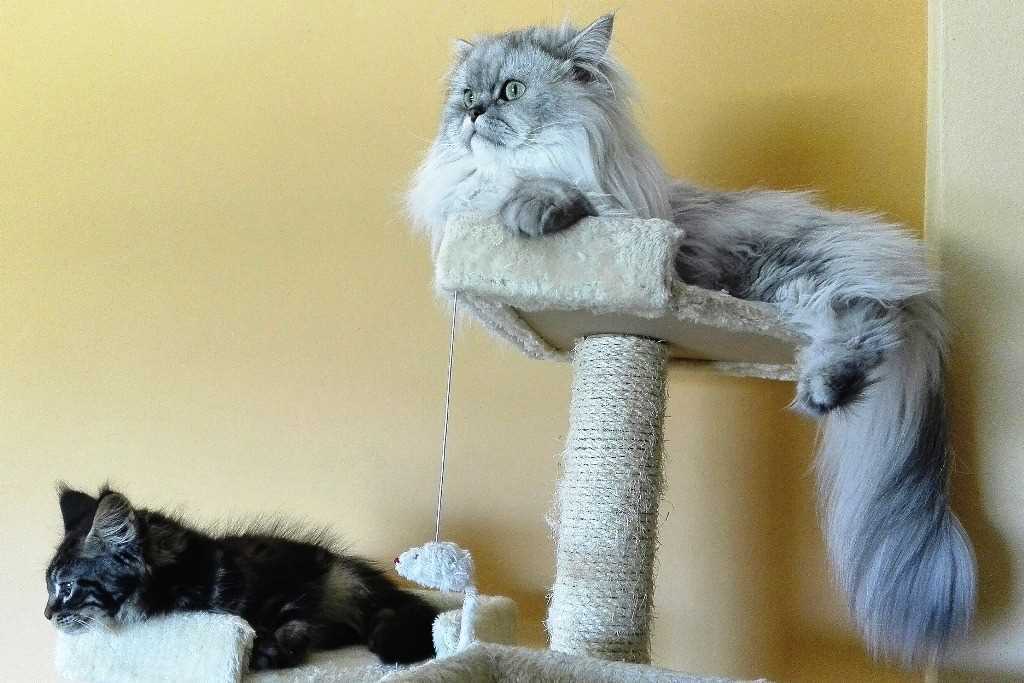 The Persian Chinchilla Cat breed is also a feline breed created by man in the 18th century. In Great Britain a breeder Mrs. Vallence crossed a smoke-colored Persian with a grey tigrated Persian, obtaining a cat with silver fur and colored fur ends. Thanks to Princess Victoria of England, the breed expanded throughout the country.

The first officially recognized Persian chinchilla was a kitten called Silver Lambkin. This first specimen was embalmed and is still on display at the South Kensington Museum in London. In the Crystal Palace feline exhibition in 1888 it won most of the prizes.  The breed was called Chinchilla because the color of the hair resembled that of the anonymous rodent, even if the shades are the opposite and with which it shares the silky hair.

The first specimens of Persian Chincillà were darker than the current ones and the selections to obtain a lighter coat weakened the species in the mid-twentieth century, so much so as to risk extinction during the Second World War. Luckily some specimens were imported from America and the breed has been recovered and today is much sought after.  For the fans in fact the Chinchilla is considered the most beautiful of all Persian cats.

Character of the Persian Chinchilla Cat

The Persian Chinchilla Cat is the classic parlor cat. Tendentially lazy to the game prefers to rest, even if sometimes he does not disdain to play with the owner with whom he has a very close relationship even if he is also fond of the other members of the family. He also likes to be a bit alone, he likes to cuddle but not for long. He is very quiet and seems to prefer to spend most of his time at home, rather than in the garden. He is the ideal cat for beauty shows, because he can remain impassive in front of the crowd and he can show his elegance; he seems haughty and aristocratic and he is very appreciated also for this.

At home he gets along well with everyone, even with other animals and children as long as they are not too agitated, alternatively do not hesitate to offer him shelves on top and hiding places to take refuge to have further calm. In fact, calm is the thing he wants most of all. He doesn’t meow much, he prefers to make himself understood with his eyes. He is absolutely not aggressive even if provoked, he prefers to leave it alone and isolate himself in a safe place.

From time to time, even if he rarely appreciates moments of activity, to play or chase prey. He is particularly touchy, so be careful not to offend him or he will hold your face for a long time, or until he gets what he wants.

It is a medium-large cat, with a rather sturdy build.  The weight varies from 4/5 kilograms to 7. The characteristics are those of the Persian cat, but smaller, the nose is less flattened, the head is narrower and the ears longer legs are quite short with round feet that have tufts of hair longer between the fingers. The tail is rather short, but it is covered by a long and thick mantle. The eyes of the Persian Chinchilla are of a particularly bright emerald green color. They are accentuated by a black outline that adds depth to the color.

But it is the coat that fascinates the most in this cat, both for the color and for the consistency to the touch. It is in fact a real pleasure to caress a Persian Chinchilla Cat, as it is long, silky and with a thick undercoat. The color is silver white for the whole length with black on the tips. Other 4 color variants have been recognized for this cat.

Care and health of the Persian Chinchilla Cat

It is unfortunately a cat of delicate health.  He often suffers from ear disorders (parasitic otitis), strong eye tearing and kidney and bladder stones.  The particular morphology of his face causes disturbances in breathing both in winter and summer. Persians have a particular predisposition to hypertrophic cardiomyopathy of the cat, which can cause hypertension and other heart problems.

Finally, these cats are often affected by a genetic disease called renal polycystitis of dominant type. It is estimated that about 40% of Persians are affected. The disease can generally be diagnosed around 10 months of age and this allows to act before it occurs more violently at the age of 7 years of the cat.

The hair is very long and needs to be brushed daily because it loses a lot of hair and once a month it is good to take a bath. It is also good to clean the eyes, ears and nose every day, because secretions can cause infections.

It has a life expectancy from 12 to 18 years.  Being a cat that does very little exercise, it is appropriate to take special care of the food and it is not appropriate to feed them only with dry food.