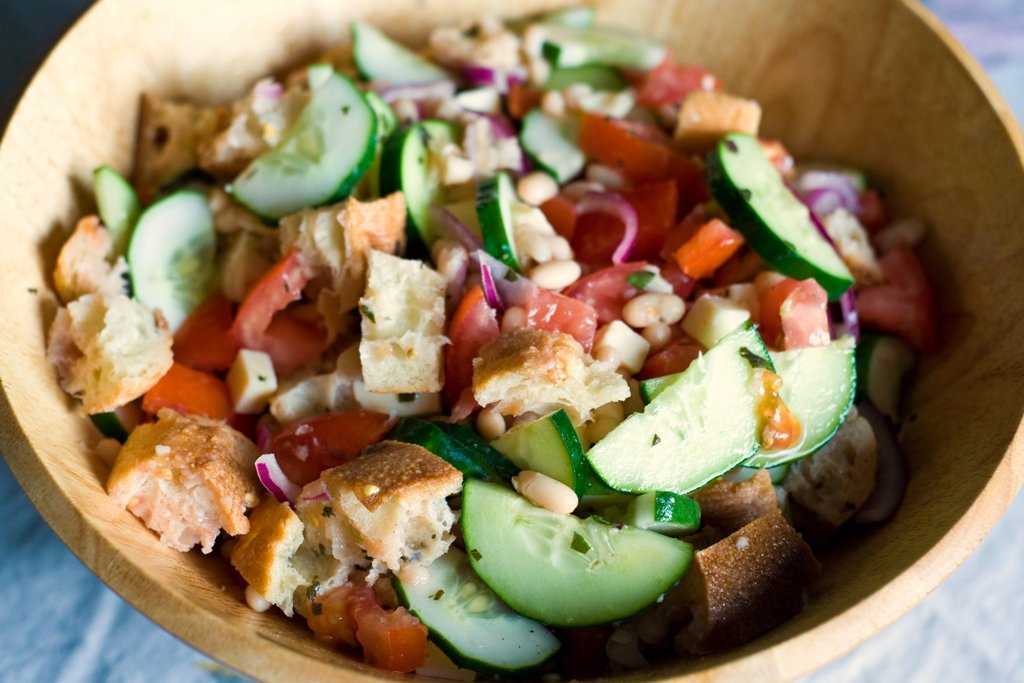 The panzanella is a dish of poor Italian cuisine that has its origins in Tuscany and precisely in Florence. The term panzanella could come from the union of two words, bread and Zanella (as the soup was once called). The peasants of the time being very poor could not throw bread even if stale, then bathing it with water and adding the vegetables of the garden of the moment was born the panzanella. Others, on the other hand, think that the origin of the panzanella is attributable to the fishermen who brought bread on fishing boats and when it became stale they dampened it with seawater and added to what they had under their hands of vegetables. On this poor but exquisite dish rivers of words have been written, even there have been those who sang the praises in a poem.

The bread of the classic Tuscan panzanella must be strictly Tuscan bread i.e. without salt. Possibly cooked in a wood-burning oven. It must be at least 3/4 days i.e. it must be stale and very hard.

Soak for a few minutes in a little water after which you squeeze the bread finely. At this point add the vegetables cut into thin slices and in not very large pieces, a little salt, olive oil just enough and a few drops of wine vinegar. It mixes everything well and is garnished with a few chopped leaves of basil. A recommendation, always chop the basil with your hands, never cut it with a knife otherwise it turns black.

For those who do not like soaked bread, I suggest to crush the bread into many small pieces, put together the tomato cut into small pieces and leave it in the refrigerator for a few hours. Maybe doing this preparation the day before. It will be the water that will lose the tomatoes that will soften the bread without doing it too wet. Just before consumption add the other vegetables and seasoning. Keep it in the fridge for at least an hour before serving it on the table. This will allow you to blend all the flavors of its ingredients well.

This is the classic recipe of Tuscan panzanella, as it has been prepared since antiquity. There are also rather tasty variations.

It is also prepared in Livorno, in this version to soaked bread, already prepared with the basic recipe, you add fillets of anchovies in extra virgin olive oil, diced tomatoes, red onion, capers, oregano salt and pepper.

In Sicily it involves the use of anals, capers and garlic in addition to vegetables.

In Umbria, stale bread is soaked in a solution of water and vinegar.

In Campania he adds buffalo mozzarella.

In Rome it is use to wet the crust of bread without breaking it.

As for the herbs to be combined with the panzanella, in the original recipe is basil, while in other regions other herbs are put other herbs such as mint, chives, oregano or even parsley.

However, because of its poor origin, this dish lends itself very much to the imagination of everyone and to what we are in the house at that time. You can prepare it in a thousand different ways, but always with the bread base.

There are also slightly more strange and delicious variants, such as the one that involves the use of a few cubes of watermelon, bits of feta-type cheese, and honey to season, combined with the soaked bread and the usual vegetables of the classic panzanella.

The preparation is very simple, cut the slices of stale bread, wet them with water and prepare them in a tray. Drizzle with a drizzle, add a splash of vinegar and a little salt. In the meantime, prepare the dressing to be put on top of the slices of bread.

In a bowl, wash and cut into small cubes the tomatoes, season with the oil and pieces of basil leaves, mix well and put the mixture on the slices of bread you had prepared before. It is a tasty appetizer or even a first summer dish, fresh and that does not require the use of the stove.

Even in an Umbra variant the vegetables are placed on top of the moist slices of bread but left whole.

The procedure is the usual and also the seasoning of the slices of bread, for the mixture to be put on top of the bread, instead of just tomatoes, you also put cucumbers and red onion. all cut into slices or small pieces, tossed with olive oil, salt and on top of a few leaves of basil. In the same region you can find variants that also include carrots, or strips of salad instead of cucumbers and even celery cut into small pieces. However for this type of panzanella, the slices of bread must remain whole and serve as the basis for the various toppings.