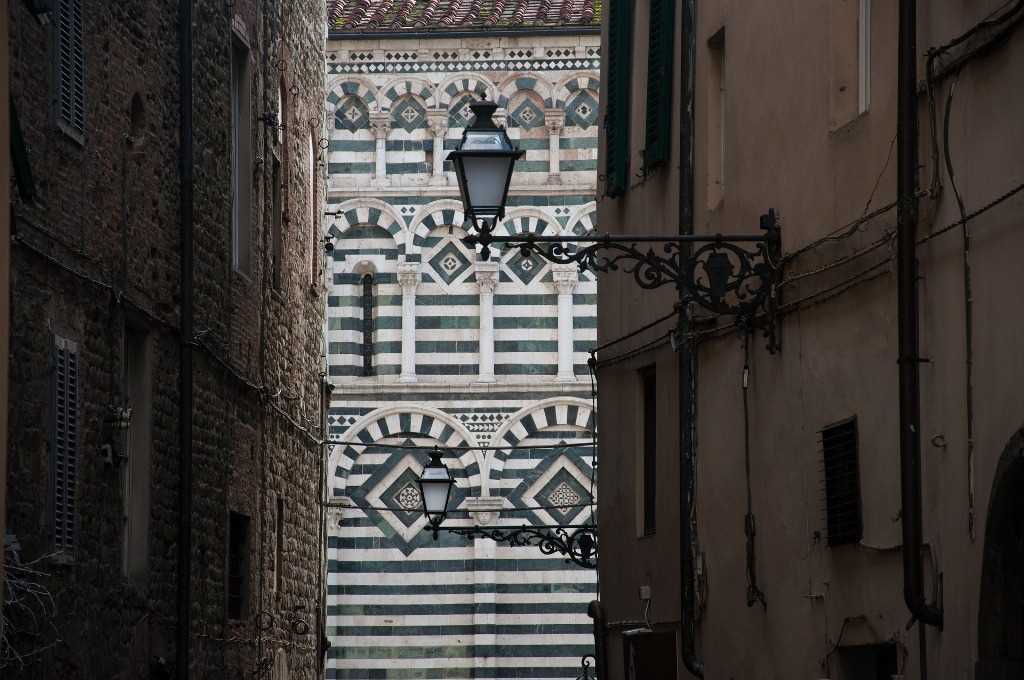 Today I want to talk to you about some typical recipes of the city of Pistoia. Unfortunately in Tuscany, where this town is located it is one of the least known among the provinces, although its history is very old and art can be found everywhere in its small old town, as in the other towns of its province. In addition, in the province of Pistoia you can find environments that are still intact and rich from the point of view of flora and fauna. So the flavors of this small land, can be savored both in the city and in the small towns that offer many typical local products.

The bruschetta today normally served with appetizers especially in winter, it is an old tradition of when the peasants could not throw away anything, they used the dry bread making it roast on the fire.

They are roasted in the oven some slices of homemade bread, just removed from the oven are rubbed with the clove of garlic that we will have peeled. At this point the bread is toned with olive oil and a pinch of salt. It is recommended to eat it just got hot again.

Another Tuscan specialty is the black croutons that are found throughout Tuscany but which in Pistoia are prepared with a mixture of chicken livers and spleen, unlike other areas where the spleen is not put.

Clean and wash the chicken livers and spleen, pass everything into a food processor to chop it as much as possible.

Chop the carrot, celery and onion as finely as possible. Meanwhile, with a little butter and oil in equal quantities, fry the chopped vegetables in a pan that you have already prepared. Also add the crushed garlic clove, parsley and bay leaf, but should be removed as soon as golden brown. At this point add to the base of the sauce the mixture of livers and spleen and simmer for about half an hour adding broth if the mixture tends to dry out too much. After this time add the wine and let it evaporate. Add the capers that you will have chopped very finely, adjust the salt and pepper and continue to add broth let cook for about twenty minutes until the mixture is soft and creamy.

Meanwhile, prepare the bread, toasting small slices of Tuscan bread (so without salt). Soak just a portion of the bread in the broth and place a serving of gravy on top. Our black croutons are ready. Another way to bring croutons to the table, in my opinion better, because it allows you to eat them always hot is to have guests prepare the croutons directly on the table, bringing a ceramic bowl containing the sauce with under a small stove that it allows you to keep it warm at all time and the croutons just removed from the oven. It will then be the diners who choose how many croutons to eat.

Let’s move on to the first. I propose two, the first is the typical dish that is prepared on July 25th which is precisely the feast of the Holy Patron of Pistoia, San Jacopo and it is the macaroni on the duck. A dish therefore rich and hearty. The other is a really poor first course. His name is incarcerated and legend has it that he was prepared by the inmates of the prisons of Pistoia, which was located next to the public slaughterhouses. For this very simple dish were then used the scraps of the slaughterhouse and the less valuable parts of the veal or beef.

Let’s now move on to the recipes:

Macaroni on duck or San Jacopo.

This dish is considered a unique dish, as the duck sauce that serves to season the macaroni and the larger pieces of duck that will serve for the second, are cooked together. Let’s start anyway from the pasta, the macaroni precisely, which are prepared normally at home being very difficult to find on the market ready-made if not in some fresh pasta workshop where you can order them. It is a paste that looks like squares of about 7/8 cm by 7/8 cm. But it is very easy to prepare them if you know how to make a sheet of wheat flour.

Work the flour with the eggs that you will love slowly adding a pinch of salt and a drop of olive oil, until you get a homogeneous and smooth dough. At this point you either flatten the dough with a rolling pin until you get a very fine pastry that will then be cut into squares, or you use a dough machine that allows you to smooth strips of dough that will then be cut as before. Our macaroni are ready, now let’s move on to the duck.

For this preparation, the mute duck is used (so called because it sneezes much less than the other species even if it is not really mutated). The strange thing is that this type of duck is not from our territory but the farms are located in the Valley of Padana. But it is not a very old dish considering that this variety of duck was imported from South America.

Ingredients for the preparation of the duck:

Prepare the duck sauce and duck in pieces that will serve as a second dish.

Clean the duck well, removing all the entrails, which we will leave aside because they will serve in our sauce. Cut the duck into small pieces, taking care to remove from a few larger pieces, a small amount of meat that should be finely chopped.

In a pan put the olive oil and fry the vegetables (onions, celery and carrots, cut into thin but not chopped strips), the crushed garlic should be removed as soon as it is golden. When the vegetables are golden brown, add the chopped duck and the smaller pieces we had chopped before.

Cook the meat for a few minutes and in the meantime clean and wash under the running water well the insides of the duck you had removed before. Chop them finely and add them to the fry and the meat, these will give shape to the sauce that will dwell our macaroni.

Then add the white wine and let it evaporate, salt, pepper and put at this point the peeled tomatoes in pieces and the sprig of rosemary that will be removed when cooked. All this should be cooked about an hour and a half, adding hot water if the mixture tends to dry out too much.

When cooked, take off the large pieces and set aside in heat to consume them as a second dish, while the remaining sauce will serve to season the macaroni that you will have cooked in plenty of salted hot water.

Bring the already grated cheese to the table that everyone will put to their own desire. The original recipe wants as cheese to season this dish, a typical cheese of the pistoiesi mountains, the pecorino with raw milk, and it is great because it is not very salty, but it is not very easy and therefore also parmesan cheese or grits seasoned and grated will be fine.

Usually to accompany the pieces of duck that will serve as a second dish, the ideal are the snake green beans, a type of very long green beans (hence the word snakes) that are found only in full summer and are cooked stewed with a carrot pan celery and onion in olive oil and chopped tomatoes. They are a really good contour for other preparations as well.

Let’s now move on to this poor dish that unfortunately is very little even in our city, where it was created. Unfortunately, as for everything, poor pieces such as veal offal, hundred skins, tripe and intestines, are considered unattractive by the new generations, who do not appreciate them at all. Instead, they remain dear to the older generations much more accustomed to using everything there was to sustain themselves.

The day before preparation, wash the offal very thoroughly in running water. Cook them in boiling water for a few minutes then throw away the cooking water and put the offal in cold water to store them until the next day.

The next day, cook the offal in boiling salted water with the carrot, celery onion with tomatoes and basil for about 3 hours. Remove from the heat, put the offal and vegetables aside and in the cooking water put the crumbled bread as much as possible, working it from time to time with a whisk or wooden ladle to make it a soft and creamy meal.

Combine the strips and vegetables that you have set aside, put a little butter, sprinkle with black pepper and grated cheese and serve on a very hot table.

Let’s move on to the second plates.

the preparation is quite long, in fact it is started the day before.

Put the wild boar to marinate in a large bowl along with 1 carrot, 1 celery and 1 finely chopped onion, garlic, spices and red wine. Let it sit overnight

The next day remove the meat from the marinade and throw the rest away. Wild boar meat should be made into small pieces. In a pot of crock, wither the other carrot, celery and onion, (do not use those of the marinade that preserve the smell of the wild boar and do not fit) finely chopped. When they are golden, add the wild boar cut into small pieces and let it cook until it has absorbed and evaporated all the wine that had remained inside the meat from its marinade. Once browned the wild boar add the tomato purée, salt and pepper just enough and cook the meat for about 3 hours, turning it from time to time and combining a little broth of meat or nut if necessary. After this cooking the wild boar is ready to be brought to the table and enjoyed.

They deserve a whole chapter because in the Pistoiese tradition there are several sweets and sweet specialties.

Meanwhile, how not to remember the famous confetti hedgehog pistoies. To curl the out rather hard that has a vague vanilla flavor while inside we find a heart of aniseed seeds or coriander. And a typical artisanal production of Pistoia, in fact only here you will find this type of confected.

Then we move on to another typical treat of a village in the province of Pistoia, the brigidino. It is a small fragrant wairda with orange yellow color, often curled, that smells of anise.

Not to mention the sweets that are made with chestnut flour that are found in abundance in the woods near the city. Sweets like chestnut or necci with ricotta that deserve a chapter in itself. However, speaking of my city and especially the traditional dishes that are cooked here, I think that for this reason Pistoia deserves a more in-depth visit, to taste these and many other specialties that I did not mention here.