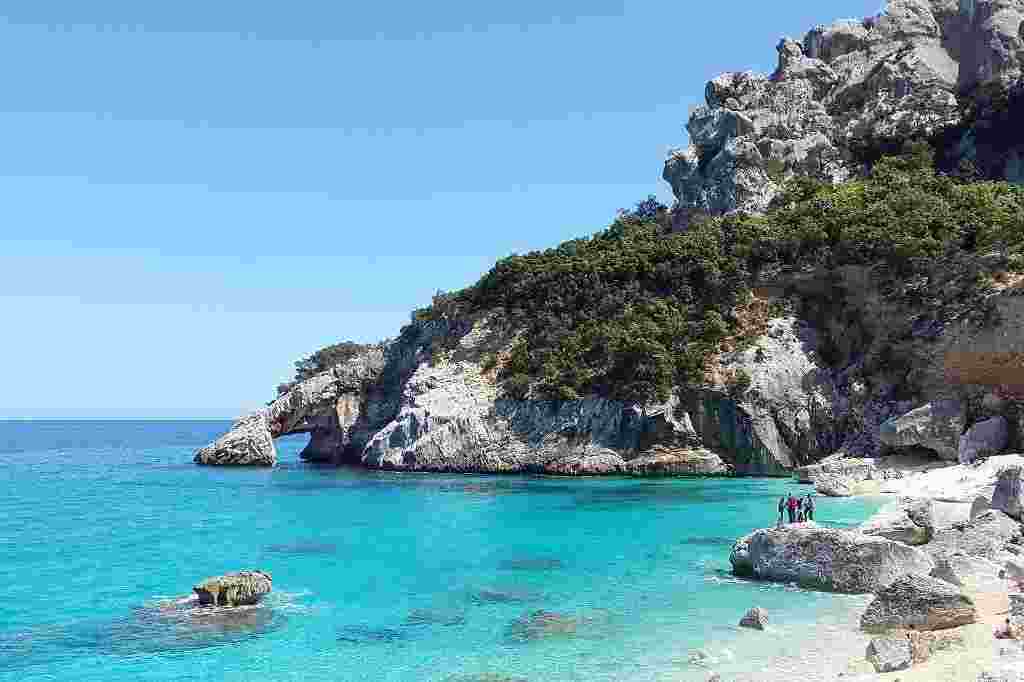 Traditional Sardinian cuisine is a poor but very tasty cuisine. Typically land although there is no shortage of fish dishes being an island, but it is focused a lot on meat, especially pork. We will talk in this article about traditional Sardinian bread, CARASAU bread, known on the continent and indeed known in many parts of the world. As appetizers the MAZZAMURRO that is cooked throughout the island where you make different variants and panADAS, a kind of small fried savory cakes that depending on the place are stuffed differently. And apart from the first dishes that are as many as not to mention the famous Sardinian pig let’s called PORCEDDU which is the recipe that most reflects Sardinian cuisine in the world. There is no shortage of fish dishes such as cod with nuts sauce and typical sweets.

The original Sardinian recipe is that of a unsit bread, kneaded with water, wheat flour or barley flour, crisp and light, with thin discs, for this is also called music paper because they rolled up just like music paper. It was preserved for a long time unaltered and was mainly used to soak it in water, broth or milk. According to tradition this is the typical bread of shepherds and sailors. It was eaten preferably with goat or sheep’s cheese or with cottage cheese. A curious thing is that the bread paper CARASAU was used as a dish, which during the meal, was eaten little by little together with the companatic.

To make PANE CARASAU you only need two ingredients:

That’s why the doses are done at the time when we decide how many sheets to make.

Knead the flour with only the water, so much so that you get a rather consistent and soda smooth paste.

The dough is flattened with a rolling pin until reduced to very thin sheets of circular shape. So these discs have to be fermented separate from each other by linen cloths, all covered with a wool cloth. After a few hours they should be baked in an already hot oven, wait until they refill, remove them from the oven, open them all around the edges with a sharp knife, then put them on top of each other to cool. Finally put them back in the oven to brown and roast them.

This is the original Sardinian recipe as it was once done, now unfortunately with modern taste has changed to the addition of yeast or salt making it lose the characteristic of the uni.

Necessary for the starter MAZZAMURRO

After cutting the stale bread into slices, soak it in milk and arrange it in a layered baking dish, interspersed with tomato sauce, grated pecorino cheese and a pinch of salt.

Place the baking sol in the oven already hot at 180 degrees for five minutes, then serve hot.

Knead the flour with lard on a flatbread, with a little warm water and a pinch of salt. It must be a smooth and compact dough that must be rested covered by a cloth for at least an hour.

Meanwhile, prepare the filling by grating the fresh cheese in a bowl and adding the chopped mint leaves with your hands.

Flatten the dough with the rolling pin and prepare many thin sheets about 8 -10 centimeters in diameter. With the filling make balls not too big to crush and lay in the middle of one half of the leaves. The other half is used to close. Weld the two parts now with a cogwheel.

In a fairly large frying pan heat the seed oil and just below the temperature fry the panADAS, for a few minutes turning them halfway through cooking.

This is one of the first traditional Sardinian dishes that was generally cooked for fat Thursday.

Soak the beans from the night before. The next day, carve the peel and in a very large pot with about 3 liters of water. Cook over a very low flame with the pot in the pan, adding the meat cut into pieces, the cabbage leaves chopped tomatoes and chopped smells. Cook for about an hour and add the wild fennel when cooked, leaving it to cook for only 5 minutes. : The traditional dish is left to cool completely for a few hours.

Before bringing it to the table, heat on the heat, place the slices of toasted bread on the bottom of the bowls, then pour over the soup and serve warm, accompanied to taste with grated pecorino cheese.

CICIONES are dumplings typical of the province of Sassari.

Knead the semolina flour with a pinch of salt and the saffron dissolved in a tablespoon of warm water on a baking board. Add a lot of water to the dough until you get a smooth and compact mixture of a certain consistency. With the worked fingers of the pieces of this dough to obtain thin cylinders, about half of a finger, to be cut into chunks about one centimeter long.

Meanwhile, prepare the sauce by putting on the heat a saucepan (better if of shard), the lard finely chopped in which to brown the chopped onion. Add the meat and after about 30 minutes of cooking over a low heat add the tomato pulp. Adjust the salt and pepper and cook for another 20 minutes.

Meanwhile, cook the ciciones in plenty of salted water and serve seasoned with meat sauce and a sprinkling of grated pecorino cheese.

The Sardinian pig let’s or PORCEDDU is according to Sardinian tradition a small pig that still takes milk from the mother, so as a rule does not exceed 5 or 6 kilograms.

The cooking of the piglet, involves a real ritual made of special attention, according to traditional customs. For example, already during slaughter, when extracting the interiors, blood is preserved. The outer rind should be quickly dissolved to the fire, being careful not to burn the cits. Preserved blood is used to grease and clean the piglet. The ideal skewer is made of wood as well as the woods used for fire are special. The juniper, myrtle and bay leaf, are recommended to better flavor the meats.

Necessary to make PORCEDDU on the spit

Preparing PORCEDDU on the spit

The piglet should be cooked very slowly because after sticking it in the spit, it should be placed about 2 meters from the live fire. During cooking the pork should be greased with the lard, making the fat from previously heated slices. Salt only at the beginning of cooking and at the end. After the meat is browned and then it starts to cook, then after a couple of hours from the beginning, approach the skewer by placing it near the grill, after you have sprinkled it with ash. The piglet will cook to perfection by taking a brown red color and browning the outer rind. It should be eaten warm, sliced and with rind.

Peel the olives and cut them into very fine pieces. In a saucepan, brown the chopped pork chops with a few tablespoons of olive oil. Just browned add the chopped garlic and parsley and the bay leaves into pieces. Put salt and pepper and white wine that is allowed to evaporate completely over a low heat and the flesh of the olives. . Finish cooking by adding a little water if needed. It will take about an hour. Before removing from the heat, remove salt and pepper and serve very hot.

A second of really special fish

Necessary for cod with nuts sauce

The cod is almost everywhere ready and soaked and it is advisable to use the ready one as the process with the seasoned cod is quite long.

The already soaked cod is cut into rectangular pieces that are not too large.

In a saucepan, fry the chopped garlic and parsley in the oil. As soon as the garlic is golden, add the cod pieces, adjust the salt and pepper and simmer, turning the pieces occasionally. At about three-quarters of cooking, add the walnut kernels that you have coarsely chopped, stir and finish cooking. This recipe is preferred to taste almost lukewarm.

Let’s move on to the sweets

These sweets are typical sweets of pastoral life to the memory of the return of transhumance. They are nuremberg specialties. They are very easy to do, but you need to start the preparation at least the day before, if you have fresh cheese already sour. Otherwise the fresh cheese should be wrapped in a telo and left to rest inside a plate for at least two days. Time to acidify.

Required for SEADAS OR SEBADAS

In a pot melt the cheese with a little hot water, add the salt and grated lemon zest.

Stir always to get a rather liquid sauce to which the semolina is added to dry. Cook again until the water is all reabsorbed and the cheese has created a thick cream. With this cream make discs about 4 – 5 centimeters in diameter and one centimeter high. These discs should be stored for a day separated by towels or cloths, in the refrigerator.

Prepare the dough now by working the flour with very little salted water to which we will add lard, As soon as the dough is firm and smooth pack many thin disks in the center of which to put the cheese discs. Cover with another disc of dough and close the two ends well. Fry the SEADAS now in plenty of olive oil. As soon as they are browned on both sides remove them from the oil and dry them on paper towels. Cover the honey cakes and serve hot.