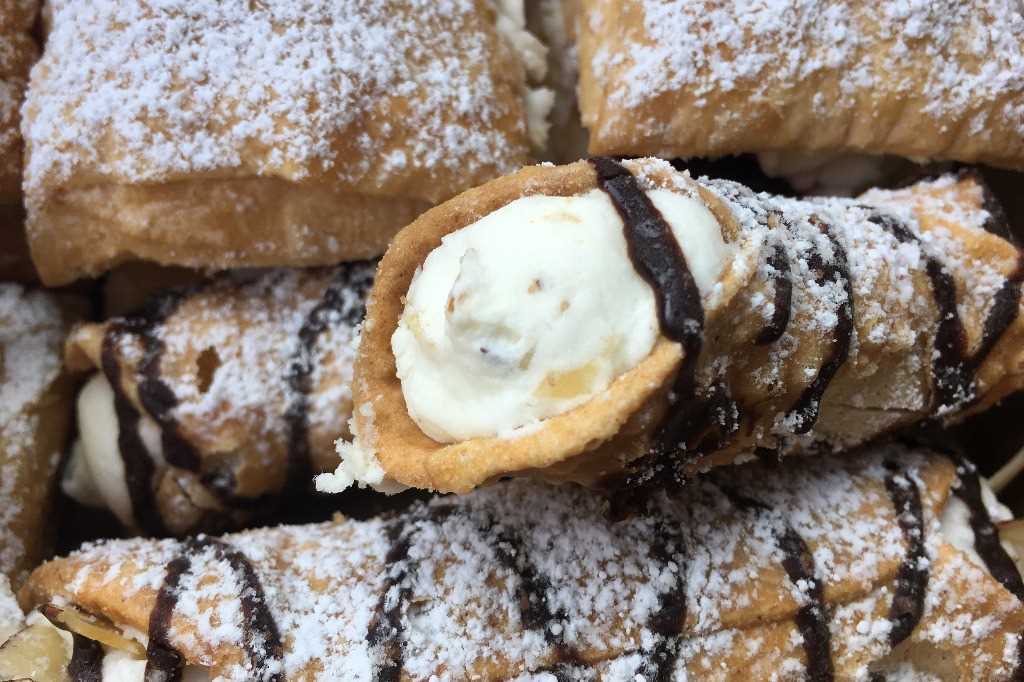 The typical Sicilian sweets are really many, so much so that they deserve an article just for them. They are complex sweets and some not easy to perform, but all very nice to see, garnished with taste and very good to eat. So round up typical Sicilian sweets, starting with the famous cannoli with Sicilian, Sicilian cassata, almond or marzipan paste and many more. Let’s start with the Sicilian cannoli, a dessert really known all over the world.

Let’s start by preparing the real cannoli that then should be stuffed with ricotta, and the dough for the cannoli must be prepared several hours before and left to rest in the refrigerator. We recommend at least 6 hours.

In a bowl knead the flour with the sugar, lard, the whole beaten egg, the two tablespoons of white wine vinegar, the Marsala, the grated orange peel and the ground cinnamon, mixing everything and working with your hands form a rather dough hard and elastic. Wrap the dough in a sheet of cling film and refrigerate for a few hours.

Remove from the refrigerator, knead the dough with your hands and cut it into many smaller pieces that should be laid out with a rolling pin to form a rather fine pastry. With a breakfast cup form many circles that go a little stretched enough to form an oval.

At this point in order to fry the cannoli you need metal cylinders that are located precisely for this use and you will need as many cannoli as we want to do, because before removing the cannoli already fried from the cylinder, it must be completely cold.

The puff pastry ovals that we have prepared should be wrapped around these cylinders and when they are all ready with the beaten egg yolk brush the surface. Let stand for a few minutes before frying the cannoli, then soak them in plenty of peanut oil for about half a minute turning them continuously, then pass them into the paper towel to remove the excess oil.

While they cool down, prepare the filling.

Sift the ricotta and work with the electric whisk incorporate the sugar.

Fill the cannoli, which you will have removed from the metal cylinders, with the ricotta and garnish the two parts with chocolate chips or chopped pistachios or slices of candied orange and bring to the table.

She is the queen of Sicilian pastry, she is very well known internationally and has an unmistakable taste, the only flaw is that it is a concentration of sugars not indifferent.

Its preparation is not easy and it is quite long.

You have to start preparing both the sponge cake and the ricotta the day before. The sponge cake because it will be cut more easily without crumbling, the ricotta is initially drained well to eliminate most of the serum, then it should be mixed with sugar and covered with a sheet of cling film and put in the refrigerator for 12 hours.

So let’s prepare the sponge cake.

To make this recipe we will need a planetary or electric whisk as the dough must be worked for a long time.

Then in a bowl break the eggs, remove the internal seeds of the vanilla pod and add them to the eggs, put a pinch of salt and start whisking the eggs adding the sugar slowly. The dough obtained must be frog and increased in volume, it will take about 15 minutes. When the mixture is ready add the flour and potato starch, working the dough with a wooden spoon very gently from the bottom up to prevent the eggs from dismounting. Once combined, put it in a previously buttered and floured cake tin and bake in an already hot oven at 160 degrees for about 50 minutes. Once cooled keep it at room temperature covered with cling film for at least 12 hours.

Now let’s prepare the real pasta or marzipan. In a pan, dissolve the sugar with the water, cooking over low heat until the sugar has dissolved. Add the almond paste and green food dye. Remove from the heat as soon as the ingredients mix and put the dough on a plane where just cold will be worked with your hands until you get a soft and smooth dough. To mix well use if you need a little icing sugar instead of flour. With a rolling pin, flatten the dough until you get a sheet of 7 – 8 millimeters thick. Now we also prepare the rum wet that will serve to wet both marzipan and sponge cake. Mix the sugar and rum with water and rum and it is ready to use. Now we begin the actual construction of the Sicilian cassata. Cut the sponge cake into 3 discs of equal thickness. One of the three discs is cut into both vertical and horizontal strips in order to obtain small pieces. The same is done with the puff pastry of real pasta or marzipan. This alternating pieces will serve to cover the edge of the cake tin which in this case is particular, in fact the edge of the caket is flared. Once covered all the edge put on the bottom of the cake tin another of the whole discs of the sponge cake. Both the edge and the bottom at this point are moistened with the rum wet having the care to distribute it evenly over the entire surface. With a sharp knife remove the excess part of the pieces that come out of the edge of the cake tin. Now take the ricotta that had been put in the refrigerator and pass it a couple of times in a sieve to make it a soft and smooth dough and stirring add the chocolate chips. With a spoon put the ricotta mixture to stuff the cake by leveling it with a spatula. Crumble the advanced sponge cake and the one cut from the edges and put it on top of the ricotta, leveling well. Cover with cling film and leave to rest for at least two, three hours in the refrigerator. Now the cassata is turned over a tray and you move on to the finish. We prepare the icing with which to cover the whole cake. Then put the sugar and water in a saucepan over the heat and cook, stirring until you get a creamy white mixture that is applied all over the surface of the still hot chest so that it is freshly smeared. As soon as it is cooled garnish the cassata with assorted candied fruit and refrigerate until served.

Mix the eggs with the sugar with the electric whisks until foamy. Slowly, combine the softened butter, flour and baking powder sachet.

With a mixer finely chop the orange that we will have first washed and cut into small pieces. Add the chopped orange to the mixture and mix well to mix everything together. Put the mixture in a cake tin or plumcake tin and in a pre-heated oven at 160 degrees for about 50 minutes.

Let’s prepare the icing in the meantime. Melt the icing sugar in the juice of an orange to obtain a kind of syrup with which to brush the surface of the cake after removed from the oven. Garnish with bits and candied oranges.

Finely chop the peeled almonds with a mixer, add the sugar, egg whites of 2 eggs, the grated zest of half a lemon and the aroma of almonds and chopped all the more to mix the mixture well. The end result is a fairly firm compound with which to obtain balls of dough that will be crushed with your hands putting a candied cherry in the center. Once ready the biscuits should be put in a pan rather spaced and covered with cling film should be put in the refrigerator for at least 7 hours. After this time put the baking in the oven already warm at 180 degrees for about ten minutes. Remove from the oven when lightly browned and serve once they are cooled.