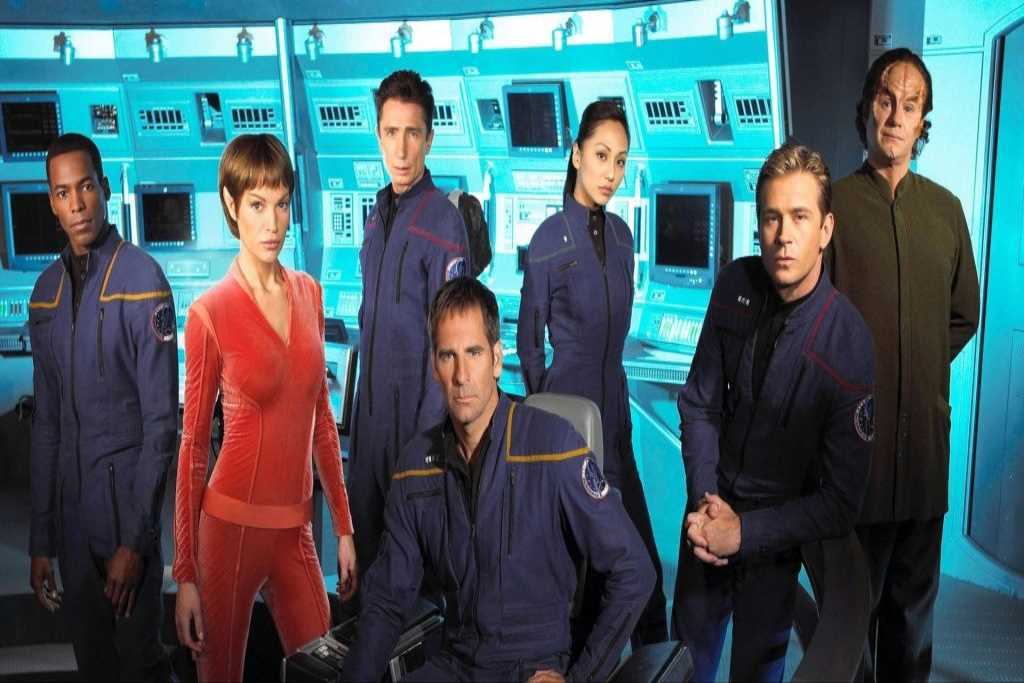 This is the fifth series of Star Trek that aired from 2001 to 2004. It had only 4 seasons because it was not very successful. Initially it was very popular, but slowly lost audience and so it was decided to close it to the fourth season. As time period this series is set in the XXII century, so before the birth of the United Federation of Planets, and it is even before the classic series with Captain Kirk. It is therefore the first true exploration of space and in this the Earth is guided by the Vulcan people who started the exploration of space long before us humans.

The crew of Captain Archer is composed of humans except for the science officer, a Vulcan named T’Pol and a Denobulan named Phlox, who is the ship’s doctor.  The ship is very Spartan compared to the ones we were used to on the Voyager or Captain Picard’s ship and has practically no shields or very sophisticated weapons of war, so it is difficult for them to find themselves in armed conflicts with different species, as in fact happens in the early years of exploration. They also find themselves having to defeat a very powerful enemy that has the goal of destroying the earth and in a first attack, he made millions of victims. The teleportation exists on the ship, but it is not much used, believing that it is safer to move with the shuttles.

Captain Archer once said that he would not even let his dog in, although sometimes he and his crew members had to use it. Captain Archer must try to demonstrate the maturity of the humans, mainly to the Vulcans, who were the first alien people to make contact with Earth after the discovery of the warp engine and are extremely critical about the human race, as they define it too emotional and therefore not suitable to confront other worlds and other races.

During its explorations the Enterprise and its crew encounter many alien species, some friendly, others much less.  Curious, but rather warlike, are the blue-skinned Andorians with their sensory antennas in perpetual motion. Very dangerous are the Xindi who try to destroy the Earth, and the Sulibans who have curious mimetic abilities. But they also encounter Klingons. Romulans, Tellariti, and even the Borg.  However, they manage to lay the foundations for a future birth of the United Federation of Planets that will be established in the last season of the series.

A typical curiosity of this series is the time war, which we find in all seasons, with Captain Archer who is even dragged by a time agent in the XXXI century and even in the last season the Enterprise returning to Earth is found in 1944 during the Second World War. The fate of the war is different than in reality, Germany invaded the United States. We also find in this last season the actor who played Data in The Next Generation, Brent Spiner, who as Dr. Song will cause several problems to the crew of the Enterprise.

This series was aired until 2005, we will have to wait until 2017 to see a new Star Trek series, called Discovery and still in progress, and then again the return of the beloved Captain Picard now 80 years old in a TV series aired in 2020 and expected a second season. There have also been many movies about the Star Trek saga with the various characters known in the various television series, much followed by science fiction-loving audiences.