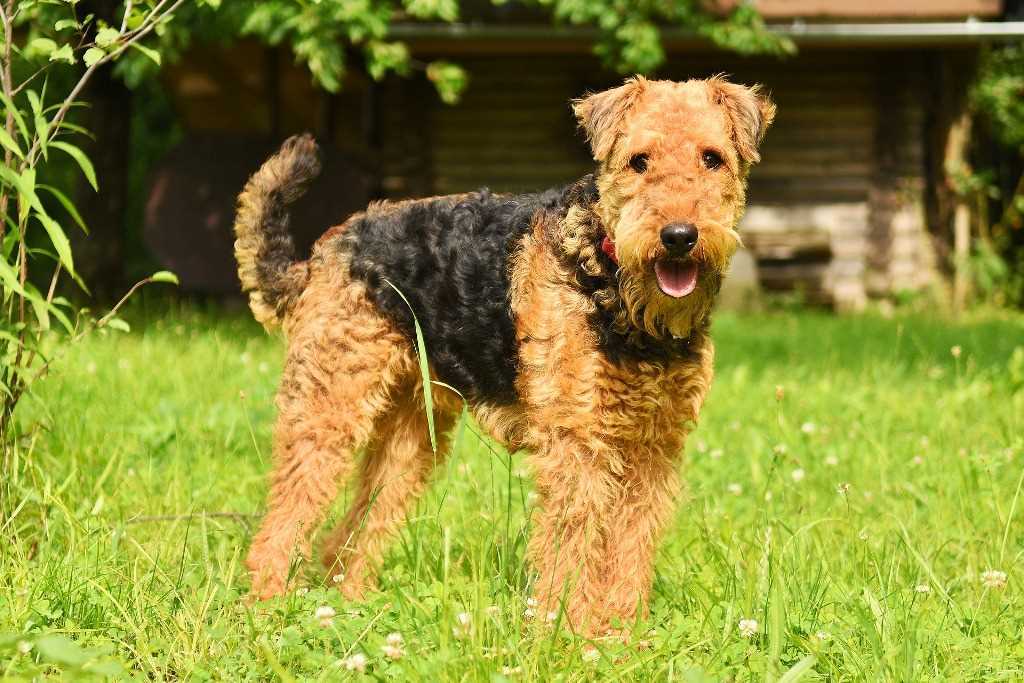 Some of you will have heard of the work of very brave dogs who carried important messages from one trench to another during the two world wars. Here was theAiredale Terrier,the largest of all terriers! He is an extremely independent, loyal and courageous dog that was used on several occasions by the British, German and Red Cross. These animals tolerate pain very well, they are extremely versatile, they do not get knocked down by difficulties and there are those who say that they are not afraid of anything at all. Yet this dog was not initially born for this purpose.

He was selected by pairing Black and Tan Terrier with the Otterhound in Airedale Province. The purpose of this crossing was to produce a hunting dog that was not afraid to dive into the swamps. Initially, it was used for hunting otters, later also as a watchdog and for hunting grey bears. Subsequently, it was also used as a support dog for the British, German and Red Cross dogs during World War I. In fact, it seems that he was not afraid of explosions and had a very strong autonomous intelligence. Two dogs were assigned for each company, helped carry stretchers with the wounded, carried medical kits, carried messages and much more.

Like all terriers, they are distracted dogs that are often bored. Any hunting dog would want to run happily. And so any education session should never be too boring or long. If you need to train it for a specific task, it is important to start very early, you should not start beyond five weeks. Very professionals may not agree with me but theAiredale Terrier,although it can be educated by anyone, can not be trained by people accustomed to dealing with dogs without not caring about the peculiarities. If you want to achieve good results, you need the intervention of a professional who has extensive experience with the clicker and with the breed specifically. It is able to do any kind of activity with diligence if properly trained. He has a tendency to get bored and destroy anything that happens to him at gunpoint and therefore is not very suitable given also the size and physical predisposition, the persistent stay in the apartment. It is a very proud and strong animal and in no case will the master have to show nervousness or yell at him. It is a dog that wants clear, calm and precise instructions. This is the classic dog that does things to please the owner and not because he is obliged to do so. Respect him, respect him, and he will respect you. With family they are loyal, versatile and extremely intelligent. With outsiders, however, they are very wary and could be aggressive in certain threatening situations. It is necessary to have it socialised with other animals but it is perfectly capable of even living with cats.

Although we reiterate the fact that intelligence is a very subjective thing as it is for humans, there is no denying that this race is predisposed to a truly impressive intellectual capacity. Although it is still a dog, all the owners I have met until now, have always praised the extraordinary ability of this dog to get by in every possible situation. The independent character combined with a very strong analytical capacity make it the ideal dog for those who have concrete needs and enough resources and patience to devote to its training. As stated above, however, it needs a quiet, safe, firm and experienced hand in order to express its potential. It is in fact a very sensitive dog that tends to get stuck if the owner proves nervous or angry.

A terrier should always be kept an eye on, but this still applies to any activity that takes place. TheAiredale Terrier is very protective and affectionate with the children of his own herd and has a tendency to be rather wary of those he does not know. Since this dog is very well-prepared for the defense of family members and some games among children can be particularly physical, it is recommended to supervise an adult always and anyway. It is very rare for a dog of this breed to attack a child but for safety it is always better to watch as it should always be with children of a certain age and regardless of whether or not there is an animal in the vicinity.

This breed was born mainly as a hunting dog but was subsequently successfully used in several different areas. He has therefore proved to be an eclectic dog and perfectly capable of performing important tasks. It is not a lazy dog and therefore suffers a lot to stay still for a long time in the same place. Whatever kind of task you want to entrust him with, with the proper training he will carry it out as he has shown in previous centuries and as he continues to do today. Currently some prefer more docile dogs such as labrador retrievers or German shepherds because they are more likely to accept and forgive the mistakes of the trainer or owner. Retrievers are less wary of outsiders and it is therefore easier to train them in case of social need.

Hair care for this breed is quite challenging because you still have to take it to special centers for streaping and cutting. This should be done at least twice a year and therefore these expenses should also be taken into account. Keep in mind that a streaping session with bathroom and grooming if necessary can last up to three hours resulting in cost-effective expense.

Like all terriers, this breed has a lot of appetite. This is a good thing in training but you have to be very careful to provide it with the right balance of calories that will necessarily have to burn with movement. Those high quality feed are great available on the market for medium and large dogs. As a puppy he should eat at least three times a day, as an adult twice a day possibly always at the same time. We recommend a reduced amount of water during meals to try to prevent stomach twisting. After an hour from the meal, you can ensure that the bowl of water is always full so that it will querage at will. You should not be used to begging for food and therefore we do not recommend giving any kind of food to humans and during your meals. Of course, premiums are granted outside during training but you have to calculate the calories well and if necessary reduce the amount of daily feed in accordance with what is agreed with the veterinarian.

The thick hair protects this dog very efficiently from the weather including snow. Like any other dog, it needs vaccinations and upstream genetic control that any serious and responsible breeder should do. Because of its size, it may be predisposed to a certain degree of hip dysplasia. Cases of seasonal oculopathies and alopecias, cardiomyopathies, hyperthyroidism, anaemia and stomach twisting have been observed. It is useful to agree the diet with the veterinarian because this breed grows physically very quickly and it is therefore useful the opinion of an expert about the diet to follow during childhood. Don’t worry, this is not a dog that tends to need a dietician, you will probably receive all the appropriate advice from the vet during the check-up and mandatory periodic vaccinations.