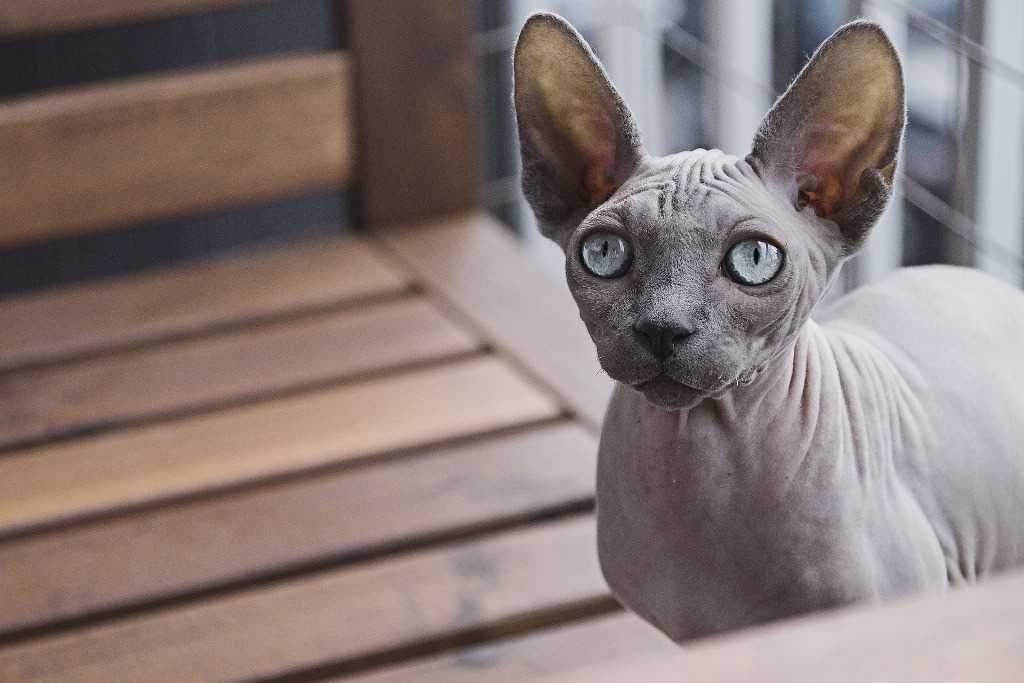 The unique feature of this cat is that it is naked, i.e. it has no hair of any kind, at most a slight hairs. There are many rumors about the origins of this unique cat. The sure thing is that it appeared in Canada in the seventies.  It would be a natural genetic mutation that man has carried on and consolidated with specimens that presented it. Probably its absence of hair is caused by a regressive gene.  But specimens of this breed have appeared in different parts of the world and at different times and have been documented. The most famous is the Mexican naked cat, which is believed to date back to the pre-Columbian period, and also in Russia where Don Sprynx and Peterbald developed and are very similar. Its name is linked to the fact that some of its somatic features resemble the Egyptian Sphinx.

The appearance of this cat is very special, the skin is soft and velvety to the touch, with many folds in every corner of the body. The head is triangular with very large ears, no mustache and lemon-shaped eyes. The body like the legs is muscular and the hind legs are generally longer than the front ones. The tail, being without hair, is very similar to that of a mouse. It is elegant in its bearing and has a very sweet look. The colors of the skin are many, those of any normal cat. It generally weighs from 3.5 to 7 kilograms depending on the sex, and has a fairly long life expectancy being a very resistant breed. It is the ideal cat for those who suffer from allergies to cat hair.

The character of this feline breed is to be very affectionate and fond of company. It is a very lively cat that needs a lot of interaction with its owners, so it is not suitable for elderly people or very sedentary as its curious nature leads it to move a lot and explore every corner of its territory.  Playing with him daily for a certain period of time and providing him with spaces to climb and run is essential for the good health of our cat. He loves very much the company of his master and family and also other pets, even dogs, are sociable and love to cuddle. They suffer a lot from loneliness so they are suitable for families with children where they can only be left for short periods of time. It ‘s very curious about people visiting the house, so much so that it is always the first to arrive at the door when a person shows up, with whom if corresponded it almost always establishes a relationship of friendship. He is a very cold cat so he loves to stay at home a lot and have warm places to take refuge. In the same way, having no hair to protect it, it must also defend itself from the sun in summer, which can cause redness and even burns. This cat sweats exactly like human beings so it should be cleaned frequently with wet wipes and at least once a month it is appropriate to give it a bath with neutral pH bath foam. It needs to eat a little more than other cats of equal weight because it has a very fast metabolism due to the expenditure of energy for its thermoregulation and also the eyes, due to the lack of eyelashes and the large size of the bulb is subject to more tearing and so it is good to clean them often with cotton soaked in antibacterial solution. Especially in small kittens this is recommended every day and even twice a day. For the rest, if the breeder has been very careful not to breed inbreeding, it has a very good health and is a very robust breed.