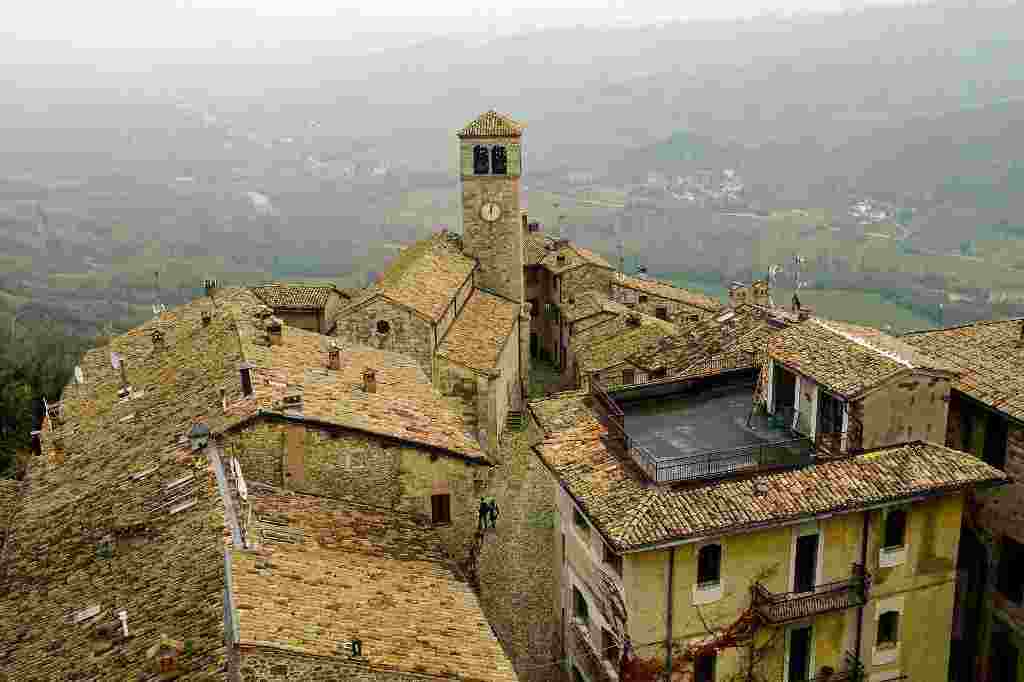 Emilia Romagna is the queen of homemade pastas, typical recipes such as cappelletti, tortellini and tortelloni come from this region, to talk about stuffed pastas, but also all other pastas such as noodles, maltagliati and other types of pasta that in many restaurants and even in the houses are still prepared by hand.

As for the second dishes and appetizers the basic element of Romagna cuisine is pork, with its many charcuterie and instead of bread is consumed the flatbread. Fish also has its importance in traditional Romagna cuisine, of which you can appreciate its many recipes.

Even for sweets the region offers a wide range of delights, in short the Romagna is all to try and see with its coasts and its plains.

Let’s start with the starters.

As for the typical Romagna appetizer there is no specific recipe as it is usually formed a tray or a chopping board with different types of cured meats and typical cheeses and the classic flatbreads that accompany the whole thing instead of bread.

Flatbreads are a typical product of Emilia Romagna where it is eaten instead of bread and are yummy stuffed with cured meats and cheeses. So below I will give the recipe of the flatground.

Necessary for the Romagna flatground

Preparation of the Romagna flatground

In a bowl knead the flour with lard or seed oil and salt, adding a little water at a time. As soon as the dough acquires consistency continue to work it with your hands on a table or a pavement. The dough obtained must be firm and homogeneous. Make a loaf and put it to rest for about 30 minutes wrapped in a sheet of cling film.

After this time, work the ball a little more with your hands and form a cylinder cut to get about 6 portions, which you will roll out with a rolling pin until it forms round sheets.

Put a dodgy frying pan on the heat and heat it very well. Cook one pastry at a time by turning it often and piercing it with a fork if it forms air inside. The flats are ready when they appear slightly golden on both sides. A gluttonous use of flatstones is also stuffed with chocolate spread or jam, they are delicious.

Let’s now move on to the first typical dishes of Emilia Romagna.

One of the classic first dishes of Christmas cuisine and festive days.

This recipe is divided into two phases, one is the preparation of puff pastry and the other the preparation of the stuffing of the chapels. First cook the chicken meat in a pan with a little butter. Usually using the chicken breast, then a slice, it will take a few minutes. Freshly cooked pass the meat in the blender and finely chop.

In a bowl add to the minced meat the two eggs, the ricotta and the grated Parmesan cheese. Work all the ingredients to mix well and combine the nutmeg, grated lemon peel, salt and pepper. The dough for the filling of the Romagna chapels is ready. Now let’s make the pasta. On a pavement or on the table put the flour and form a central recess in which you will put the freshly beaten eggs. Mix it all well and working with your hands get a soda and smooth ball.

With a rolling pin, flatten the dough until you get a rather thin pastry. In this puff pastry you will cut out discs of about 6 centimeters using a glass of that diameter. Place a teaspoon of filling in the center of each disc. Close the disc by folding it in half and then joining the two tips together. This will form the chapels in their original form.

The cappelletti should then be cooked for a few minutes in a chicken or cappone broth.

First melt the butter very slowly. In a bowl mix the semolina with the beaten eggs, the grated Parmesan cheese, the butter, add salt and pepper and a pinch of nutmeg. Mix it all together. Sprinkle and flour a rectangular baking tray and pour the mixture, leveling the surface well. Bake in an already hot oven at 180 degrees for about 15 minutes. The surface should be slightly golden.

Remove from the oven and leave to cool.

Once cooled, remove the solidified mixture and cut it into cubes of about one centimeter. These cubes should then be boiled in a chicken or cappone broth for 4 – 5 minutes. Season with plenty of grated Parmesan cheese.

Let’s now move on to the second dishes, which in Emilia Romagna are really many and one tastier than the other. The typical Emilian recipes cover both meat and fish dishes. Known in many parts of the world its sausages, which in Italy are cooked in winter and mainly in the Christmas period. Let’s talk about the famous cotechino and the paw. But there are many other recipes especially of fish such as stewed eels, baked anchovies, romagna fish broth and many others. Let’s start with the meat ones.

Cotechino is a sausage made with pork, both with rind, and with lean meats, and with fatty meats seasoned with spices such as cinnamon, nutmeg, herbs salt and black pepper. It is on the market ready to cook. It is stuffed inside a natural pork gut and is cooked very slowly for about two hours with the warning to wrap it in foil or in a cloth napkin, this to prevent the gut from breaking and leaking the cotechino.

The ideal contour is lentils. Tradition wants the cotechino with lentils to be cooked in the new year’s dinner as a good omen for the new year.

Necessary for cotechino with lentils

Preparation of cotechino with lentils

The cotechino as already mentioned if you take it fresh (you can also find packages with the already pre-cooked product) wraps in foil and cooks in boiling water for at least 2 hours. When cooked, it takes off the skin and slices.

For the lentils prepare a chopped onion, carrot and celery and fry in olive oil and butter and when they are golden add the lentils without the cooking liquid. Season for a few minutes and serve warm with the cotechino slices.

The paw inside is made as the cotechino changes only the outer part that instead of the natural pork gut of the cotechino, is stuffed in the paw of the pig from which the whole interior is removed. This too is already ready for cooking and also pre-cooked.

This is one of the best second fish dishes of the regional cuisine of Romagna. The eel is already clean, so peeled and eviscerated. The best are those caught in the region in particular in the Comacchio valleys.

Necessary for stewed eel with peas

Preparation for stewed eel with peas

Cut the already clean and peeled eel into pieces of about 5 centimeters and pass it into the flour.

In a rather large pan in plenty of olive oil fry the floured eel pieces until golden brown. Prepare a mince with parsley, garlic, onion, celery and carrot. When the pieces of eel are golden put the white wine and let it evaporate completely. Now add the chopped vegetables that we had prepared together with salt and pepper, rosemary and sage. Put the peeled tomatoes into small pieces again and cook with a lid for about half an hour, putting a little water if necessary. After this time remove the pieces of eel and set aside and to the cooking mince add the peas and cook them for at least 10 minutes. after this time turn off the heat, put the eel pieces again with the peas, mix well and serve hot.

Chop the almonds very finely with a kitchen mixer. In a bowl, whisk the whole eggs with the sugar until foamy, add the ground almonds and the rice that will be cold. Add the teaspoon of ground cinnamon and put in a cake tin of about 26 centimeters buttered and floured. Level the mixture and bake in a pre-hot oven at 160 degrees for about 60 minutes. If after about 40 minutes notice that the top of the cake tends to be too dark cover the cake tin with foil and continue cooking. This will prevent the surface of the cake from being overcooked.

WordPress, how to remove the meta box of the plugin related post from the post editing panel