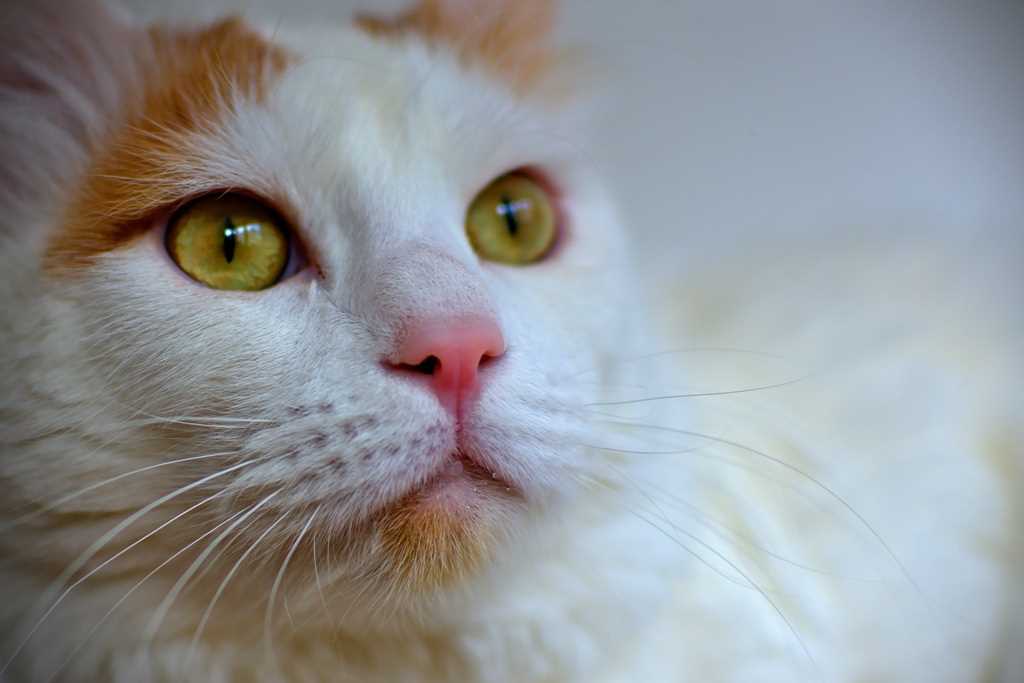 The Turkish cat Van is native to the region of the highlands of Lake Van in southeast Turkey, at the foot of Mount Ararat. According to some scholars these cats would have arrived from China in the wake of merchants who travelled the silk road. Thanks to some archaeological finds it seems that this cat was already known to the ancient Romans who conquered Armenia and that the local tribes painted these cats on their war banners and armor.

This makes them one of the oldest known breeds of cats. There is no lack of stories and legends about these felines that in Turkey are also called Cats of Allah. It is said that these two felines embarked on Noah’s Ark, when the waters began to retreat they jumped into the sea and swam to Mount Ararat, when the waters had retreated they came down from the mountain and joined the humans helping them in the hunt for mice. The Prophet then blessed them and where he touched them, on their heads and tails the hair became reddish.

In another legend Allah saw an all white cat swimming in a pond, thinking it was drowning, because of the natural aversion of felines to this element, he rushed to save it and took it by the head and tail. The parts that were touched by the Prophet since then took on a reddish color.

It is immediately noticeable that this feline has a somewhat peculiar character compared to the average cat. First in the family you choose a master and dedicate to him and him only all his attention, becoming almost his shadow. The other members of the family only tolerate them. He loves to play a lot, he is always on the move looking for prey or objects to interact with, he is particularly active and lively, a very skilled swimmer and fisherman, also an irreducible hunter, with an indomitable character and very brave. It is a cat that needs attention, to play and to discharge its particular energy. It can be said that more than a parlor cat, it can be defined a garden adventurer.

It is therefore desirable that whoever takes one of these beautiful cats has a garden at his disposal in safety, from where he can’t get out, because being very curious he could go very far away and therefore meet a whole series of dangers. The maximum would be to provide this garden of a pond or a small pool, perhaps with fish inside (which would however have a short life), where our cat can dive, which he loves to do. It has been noted that having a small pond, he throws in balls, grass or twigs only to dive in order to fish out the prey. As for any other animals in the family, dogs or cats, he tolerates them only if he can dominate them.

Although very playful, it is not suitable for small children as its exuberance can lead it to play in a somewhat impetuous way. He can be a great life companion for people who live alone, but who have time and desire to play with him quite often. He doesn’t stay in one place for very long, he doesn’t like to stay in his arms even though he loves cuddles and caresses a lot. He is a skillful jumper so you can find him on the tallest furniture in the house from which he can dominate everything that happens around him.

In Europe he was brought in 1955 by two English ladies, who were in those areas for tourism. Fascinated by the local feline population, they obtained two specimens of Turkish Van and brought them to England where the two cats had a progeny that repeated the traits and coloring of the parents, thus starting a breeding program.

This beautiful cat is of medium to large size, the male can weigh as much as 8 -9 kilograms. Of slender and elegant figure, it also has a muscular structure of respect. It has an immaculate white coat with reddish spots on the head and tail, semi-long, waterproof, soft and not very adherent to the body, without woolly undercoat. Its length varies according to the seasons, in fact during the wetsuit period it loses a lot of it. In winter it is very long and dense, while in summer it is shorter and less thick.

The legs of medium length are quite muscular and the foot pads are adorned with tufts of hair. The muzzle is rounded, with a straight nose of medium length with a slight depression at eye level.  The ears are large and well covered with fur, wide at the base, rounded and close together on the head. The eyes are magnificent, large, very expressive, oval and slightly oblique, amber, blue and it is not rare to find specimens with uneven eyes.

The Turkish cat Van is a very robust animal and has a very long life expectancy, around 18 years. Compared to many other breeds it is certainly in good health, but it is still exposed to the risk of developing IVF, FeLV and hypertrophic cardiomyopathy. Normally, as it has no undercoat, it only needs one brush a week; during the wetsuit period it is good to brush it every day because it loses a significant amount of hair, which can cause problems if ingested during daily cleaning.

For the rest he eats both wet and dry, he prefers fish, but he also eats meat. During the moulting period it is good to add specific supplements to the diet. Your vet will be able to show you the most suitable ones for your cat. If it can not do all the motion that he needs, it is good to check the daily amount of food because it is a cat that tends to eat more than it needs, precisely because it is hyperactive.