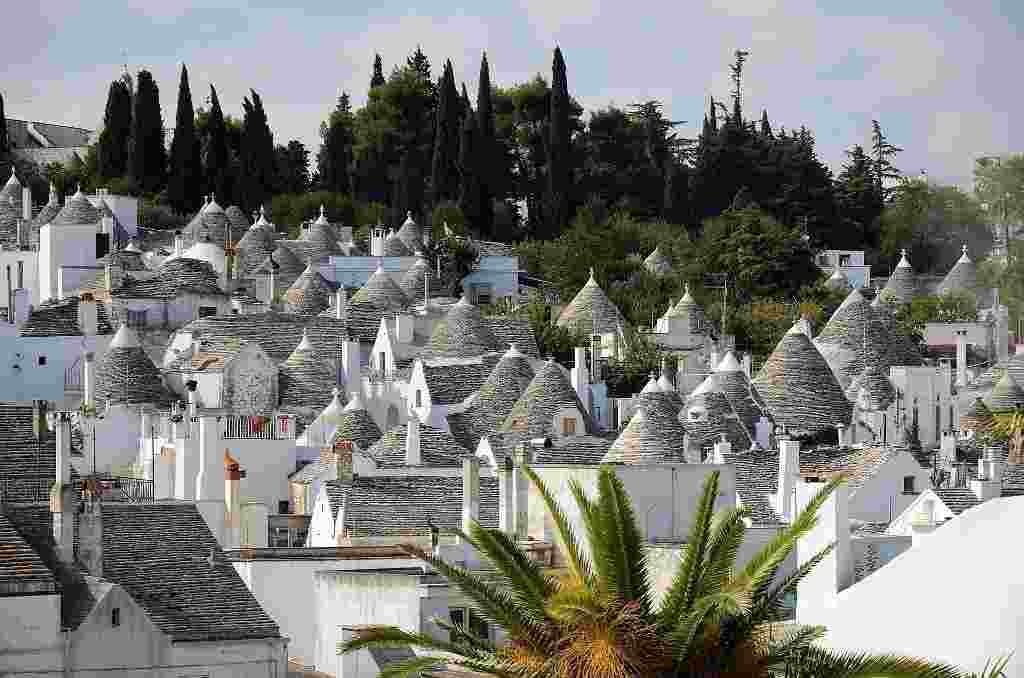 The Puglian cuisine is simple and genuine. The products of his land range from the grain of the Table to the blue fish of its seas (and not only), to extra virgin olive oil and vegetables. All these products are the basis of the best typical Puglia dishes. Thinking of Puglia as not to think of the famous orecchiette sweepers of the rape tops, known all over the world, the stuffed mussels and the taralli and its liqueurs also very well known as the Puglian nut.

Taralli are a great accompaniment to an aperitif or snack out of the meal. The only problem is that they are like cherries, one pulls the other. There are flavored in many ways, fennel, chili, pepper, just to name some of the best known. This is the basic recipe, then you can customize it as you like.

Form with flour the typical fountain to knead and in the center add the oil, fennel seeds, salt and pepper and start kneading. Slowly add the wine and knead the dough until you get a firm and elastic mixture. Let the dough rest about thirty minutes, after which form dough cylinders about 7 – 8 centimeters long and form the classic shape of the taralli, round, joining the two garments overlapping them. Once you have finished preparing the taralli, boil a pot of salted water and put in the taralli a few at a time that they are removed as soon as they come to the surface. At this point the taralli are ready to be put in the oven already hot at 200 degrees for about 30 minutes.

A typical crunchy and delicious Puglia starter made with fried polenta. In the old town of Bari they are fried on the street especially in winter and are accompanied very well with cured meats and cheeses.

To prepare the polenta boil the water and pour the corn flour in rain following the instructions on the corn packaging for polenta. At the end of cooking, however, it must be very dense. Transfer the polenta to a rectangular mould with very high edges and allow to cool completely for several hours. The polenta must become very dry otherwise it does not fry well. After this time, cut the polenta into slices of about one centimeter and fry in plenty of olive oil until the slice turns golden. Dry them on paper towels and serve still warm.

The first best-known dish of the Puglia tradition. Traditionally orecchiettes are prepared at home, but are already ready in all supermarkets. Following the recipe with the turnip tops, I will also write the recipe to make orecchiette in the house.

Necessary for orecchiette with turnip tops

Preparation of orecchiette with turnip tops.

In a pot with plenty of boiling water cook the turnip tops that will have been cleaned and washed for about 2 minutes. After that also put the fresh ears that will cook in about 5 minutes.

Meanwhile, prepare the sauté, putting in a rather large pan a drizzle of olive oil, the whole garlic (which should be removed at the end of cooking) the fillets of anchovies in the oven, roughly chopped and a pinch of chilli. After 5 minutes of cooking, add the turnip tops and orecchiette, which are now cooked, drained of the cooking water. Stir gently adding the sweet paprika and serve warm.

Preparation of minestrone with Puglia

Clean the rape tops having the care to choose the turnip tops with the flowers that are softer. Cook the turnip tops in plenty of salted water for about ten minutes, Remove the larger stems and finely chop together with the onions. In a large pot with a few tablespoons of olive oil fry the onions and chopped stems of the turnip tops for a few minutes, adding salt, pepper and a pinch of chilli powder. As soon as the onion is golden add two liters of water and let it boil for about an hour and a half. After this time put the pasta and the tops and flowers of the turnips in the pot. Cook the pasta al dente and remove from the heat. Sprinkle the grated pecorino soup, season with salt and pepper and two or three tablespoons of seed oil. Serve not too hot.

This is a quick and tasty second that some also present as a starter, but it is so rich that it becomes almost a unique dish.

Necessary for mussels stuffed with Puglia

Wash the mussels thoroughly with a hard toothbrush and with a knife open the valves. Preserve the water of the mussels to flavor the sauce even more. Wet the bread crumb and squeeze it well and with this prepare a mixture by combining the whole eggs, the grated pecorino cheese, a clove of garlic and the parsley, very finely chopped. It must be a compact compound. With this mixture fill the valves of the mussels trying to close them by tightening them well.

Now we prepare the sauce where to cook the stuffed mussels.

In a large pan with a few tablespoons of olive oil fry the finely chopped onion and a whole crushed garlic (it will be removed at the end of cooking). Now add the tomato purée or the chopped tomatoes and cook for about 20 minutes. Combine the mussels and water, cook for another 20 minutes and serve warm.

This is an ancient recipe from Salentina that owes its name to the pinata that is the pot of crock where usually in Puglia the octopus is cooked.

Necessary for the octopus A PIGNATA

Clean the octopus or meatballs very well, cutting it into not very small pieces.

In a few tablespoons of oil, in the shard pinata, brown the finely chopped onion and the whole garlic (which is then removed at the end of cooking). Add the peeled tomatoes into small pieces and cook for a few minutes.

Add the octopus in pieces, along with the chopped parsley, the 2 bay leaves. Season with salt and pepper and cook very slowly for about an hour and a half with the lid. The octopus produces a lot of water in cooking so there should be no problems with cooking. Halfway through cooking, add the potatoes, which should be peeled and cut into small pieces. After this time cook the octopus for another twenty minutes without a lid to let the sauce be withdrawn a little. Sprinkle with chopped parsley and serve hot.

It is a typical Puglian liqueur made with nuts. It is very well known both in Italy and around the world. It is a bitter with digestive properties.

Necessary for the Puglian nocino

Preparation of the Puglian nocino

In a very large glass container put the walnuts that will have been cut into pieces along with the lemon peel, cloves, nutmeg and cinnamon stick. Now add the alcohol to 95 degrees and immediately close the container to prevent the alcohol from evaporating. Leave to infuse for 40 days in a cool and dry and possibly ventilated place.

After this period, cook the water with sugar to prepare a syrup that will be added to the liquor once it is completely cooled. Stir and strain before bottling the liquor. This is left for several months before being enjoyed usually 3 or 4.

We prepare the shortcrust pastry for the pastry. In a bowl combine the flour with the sugar, the butter at room temperature cut into small pieces, the two beaten eggs and the grated zest of half a lemon. Work the dough obtained on a flat esplanade to obtain a firm and elastic dough. Wrap the dough in a clear plastic sheet and refrigerate for at least 50 minutes.

Let’s prepare the custard in the meantime. With the electric whisks whisk whisk the egg yolks with sugar, add the flour and the zest of half a grated lemon. In a saucepan cook the egg and sugar mixture with the milk until it reaches the boil. Freshly boiled put the mixture in a bowl to make it cool completely.

To make these treats you need special molds (they are oval molds made of aluminum).

Take the shortbread and after working it a little with your hands spread it in a pastry of about half a centimeter. From this puff pastry cut oval pieces a little larger than the molds where you will put the piece to cover the bottom and edges. Now fill with the custard each mould with the pastry and cover everything with other pieces of shortbread to close. Beat an egg and brush the surface of the pastries with it before putting them in the oven already hot at 180 degrees for 30 – 35 minutes.