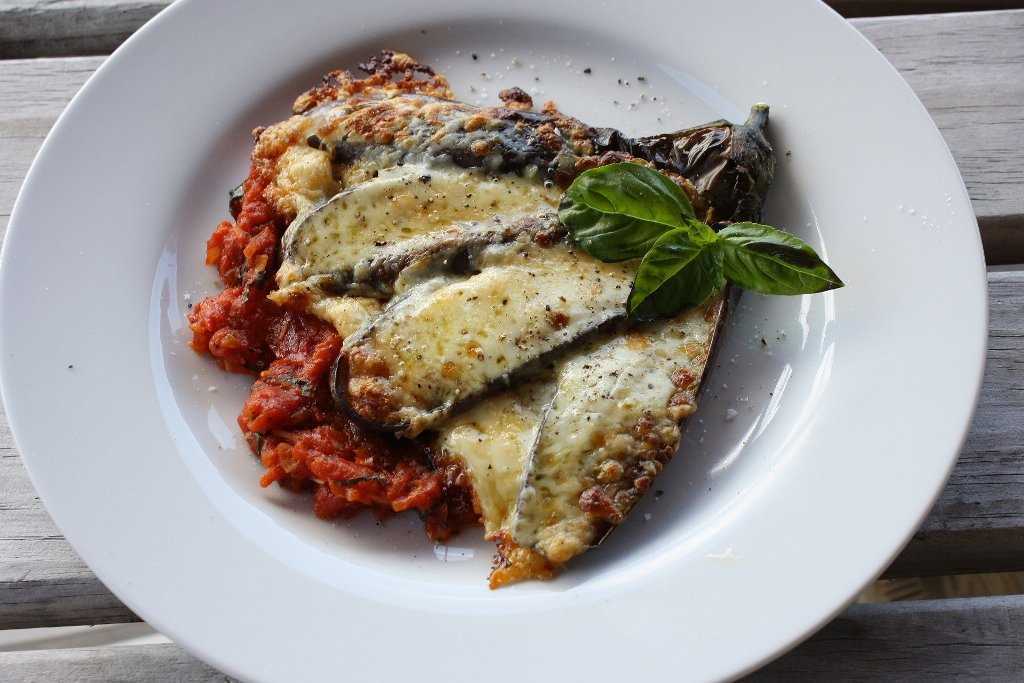 Parmesan does not indicate a particular dish but a certain way of cooking. It was born in southern Italy, especially in Sicily and Campania, but known today throughout Italy and also in the world as one of our typical dishes. The most famous parmesan is the one with aubergines and it is with this that we start our roundup of the many variants of this dish.

Let’s start by preparing the aubergines, a rather long process if we want them to lose that bitter taste they have. So the day before, we shave and affect our aubergines in to discs of about one centimeter and put them in layers in a bowl with coarse salt between layer and layer. At the top we put a weight so that the aubergines are compressed and lose as much water as possible.

The next day wash the eggplant discs well under running water to remove all the salt and dry them well. Now they’re ready for our recipe.

after we have prepared our aubergines as already explained and after washing and drying them, they flour lightly and fry in plenty of seed oil until they turn golden. Remove from the oil and pass them on paper towels to remove the excess oil.

In the meantime we go to prepare the sauce by chopping the shallots very fine and making it brown in olive oil. Just golden add the tomato purée, salt and pepper, a few fresh basil leaves and cook for about ten minutes or until thickened.

Slice the mozzarella. Everything is ready now for our parmesan.

Take a baking dish and after pouring a drizzle of oil on the bottom put a couple of tablespoons of our tomato sauce. Place the aubergines on top until the surface of the baking dish is covered. Now a nice sprinkling of grated Parmesan cheese and a layer of mozzarella. We continue to add layers in this order until the end of the ingredients. In the last layer put on top of the aubergines only the tomato purée and a lot of grated cheese. Place in the oven already hot at 180 degrees for about 35/40 minutes. Serve as soon as it is removed from the oven.

This parmesan is a variant of the most classic eggplant parmesan, but in my opinion lighter and more digestible.

After washing and cutting the ends of the zucchini, they are cut into thin strips and fried in plenty of seed oil.

Once fried, absorb the excess oil with paper.

Prepare the sauce now. Brown the half finely chopped half onion in a saucepan with a little olive oil, add the tomato purée, salt the pepper and basil leaves and cook for about ten minutes.

Now prepare the beaten egg with a little salt and pepper.

Cut the mozzarella into thin slices and start to put in a saucepan, on the bottom of which you will have distributed a couple of tablespoons of tomato sauce, the zucchini strips to cover the surface of the casserole. On top, put the slices of mozzarella in a layer and a few tablespoons of tomato purée. Now a couple of tablespoons of beaten egg and on top a sprinkling of Parmesan cheese. Continue to make the layers until the end of the ingredients. Meanwhile, heat the oven to 180 degrees and cook the parmesan for about 35 to 40 minutes.

In this recipe there is also béchamel sauce, to make it at home I refer you to my recipe of baked lasagna where I explained the procedure. If you don’t feel like doing it, you can find it ready in every supermarket.

Cook the whole potatoes in boiling water for about 10 minutes. Drain the potatoes, remove the peel and cut them into fine rounds.

At the last layer above the potatoes put a nice layer of béchamel sauce and a nice sprinkling of grated cheese. Bake already hot at 180 degrees for 50/55 minutes. Serve after a few minutes.

This tasty variant of parmesan is a purely autumnal recipe.

In the meantime we go to prepare the pumpkin, which must be cut into slices of about one centimeter high. These slices should be baked for about 10 minutes in a baking pan with parchabouts and a splash of olive oil.

Now in a baking dish where you will have passed a few drops of olive oil, place the pieces of pumpkin until covering the entire surface, continue the layers with a slice of cooked ham and slices of provola or scamorza, salt just enough and continue to make layers as mentioned until the end of the ingredients. On the last layer put only the provola and the grated Parmesan cheese.

Inform to oven already hot at 200 degrees for about 20 minutes.

Another variant of pumpkin parmesan, eliminates the cooked ham and puts in its place a layer of béchamel sauce.

For this recipe you need to prepare the aubergines the day before. They are cut into slices about 1 centimeter high and layers are formed in a bowl of eggplant slices and coarse salt. Put on a weight so that the aubergines lose all the juice they have and thus leave at least one night.

The next day wash the aubergines in plenty of running water trying to remove all the salt, dry them well.

In this recipe the eggplant slices should not be fried but grilled in the oven for a few minutes. The parmesan will be lighter.

At this point in a buttered baking dish put a couple of tablespoons of tomato purée and place over the aubergines until covering the entire surface, continue with the layers , eggplant, tomato purée, salt and oregano and a sprinkling of parmesan until the end of the ingredients.

Prepare the yogurt cream now, stirring the yogurt with two or three tablespoons of parmesan and a pinch of salt. Pour the cream over the eggplant parmesan that you have already prepared and put it in the oven already hot at 180 degrees for about twenty minutes. After this time put the pine nuts on the surface and put back in the oven using only the grill for another ten minutes.

First we have to clean the artichokes and this is a rather long preparation.

In the meantime we prepare a bowl with water and lemon in which we will wash our artichokes once cut. This is to prevent them from turning black.

Cut the artichoke, which is already cleaned externally, and we go to clean it internally of what is called a beard, remove it with a knife and throw it away.

Now our artichokes are ready to be cut into strips and then passed in the water and lemon and then dry.

In plenty of boiling oil, fry the artichokes, cut into slices after passing them inthe flour. Remove the excess oil with paper towels. Salt lightly.

Now let’s get the tomato purée ready. Put a few drops in a saucepan and fry the crushed garlic (which we’re going to remove when it’s golden) the sage and rosemary. Season for a few minutes then add the tomato purée. Cook about thirty minutes adding a little water at a time if the sauce should withdraw too much, a little salt and when the sauce is almost ready add the basil leaves and remove from the heat.

Meanwhile, finely slice the mozzarella. Now we can start making parmesan cheese. In a buttered dish, put a layer of tomato, then a layer of fried artichokes, then again tomato and on top of the sliced mozzarella. Continue with the layers until all the ingredients are finished. On the last layer a nice sprinkling of grated Parmesan cheese.

Place in the oven already hot at 180 degrees for 30 minutes. Serve hot.

Wash and peel the carrots, cut into slices. Meanwhile, prepare the peeled tomatoes in to pieces adding salt pepper and oregano. The preparation is very simple. Make layers with the carrots, peeled tomatoes and sliced cheese. For the last layer on top of the carrots, put plenty of grated Parmesan cheese. Bake in a preheated oven at 180 degrees for 30 minutes. Allow to cool for 5 minutes before serving.

This parmesan is also delicious cold and consumed the next day.

Recipe that does not include tomato, but is flavored with pesto with Genoa (for those who want to make pesto to Genoa at home I refer you to the recipe of baked lasagna, where you will find the ingredients and the recipe to do it)

In this case the aubergines should be cut into sauces of about one centimeter and treated as usual, that is, the day before put them in a bowl with coarse salt and leave them with a weight over them throughout the night so that they lose all the water and that flavor Bitter.

Once the aubergines are prepared, we go to prepare the parmesan:

Cook the eggplant washers in the oven or on a grill for about 20 minutes. Salt lightly.

In a buttered dish, put a first layer of eggplant, then a layer of pesto with Genoa and one of sliced mozzarella. Don’t use salt here as the pesto is already tasty enough.

Make layers until the ingredients are exhausted and on the last layer sprinkle abundant parmesan cheese. Place in the oven already hot at 180 degrees for 15 minutes or until the cheese has melted. Serve warm.